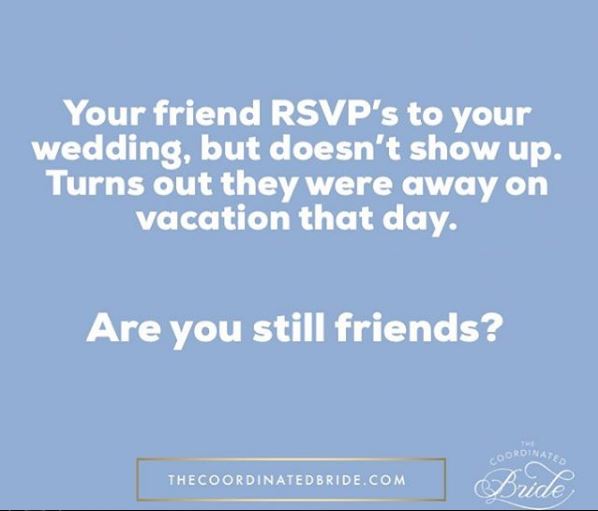 Coordinated Conversations: No Call, No Show – Should you remain friends with people who RSVP but don’t show up to your wedding?

The coveted wedding guest list.  The cause of premarital stress, arguments with your hubby to be and even your parents!  And let’s not forget, one of the most determining factors of your wedding budget.  I remember vividly putting mine together three years ago-  Using flowcharts to help me narrow down who should be and who shouldn’t attend.  I still have family that doesn’t talk to me because they didn’t make the cut. So imagine my level anger when I get a call on my wedding day from my uncle to tell me he wasn’t going to make it.  And he wasn’t the only one!  Fortunately, they called and for the most part had a good reason.  My mom was able to fill their spots with some of her friends that she just so happened to have on stand by.  But not everyone is that fortunate.

Some months ago, we posed a scenario to our Coordinated Family: Your friend RSVP’s to your wedding, but doesn’t show up.  Turns out they were away on vacation that day. Are you still friends?  As usual. you provided us with the real!

Ms.Nappier kept it real with her response.  “That means we’re going to fight upon their return and they will get a frosty shoulder from me for the duration of their life.”  Hey, I don’t always condone violence but IF there was occasion for it, this just might be the right one. 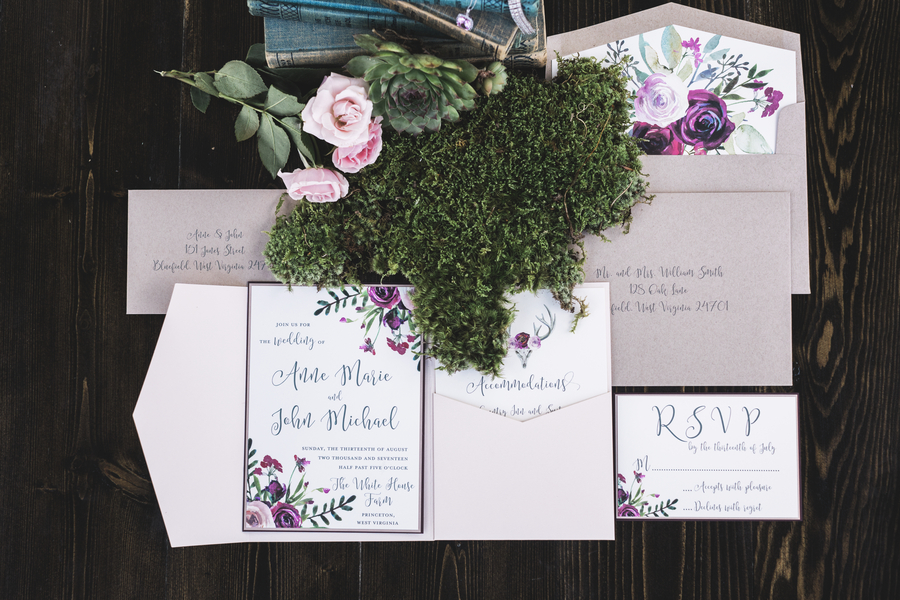 Cuzzin_stace shared quite the story.  She had people RSVP and pick their meal only not to show up.  “The kicker was one of the no shows had the gall to show up to the brunch the next day like it was nothing….He also RSVP’d for his girlfriend so it was really 2 no shows.”  I really wonder what he was thinking coming to the brunch. Did he think no one would say anything?  Cuzzin_stace permanently placed that person on the “no more invites” list. 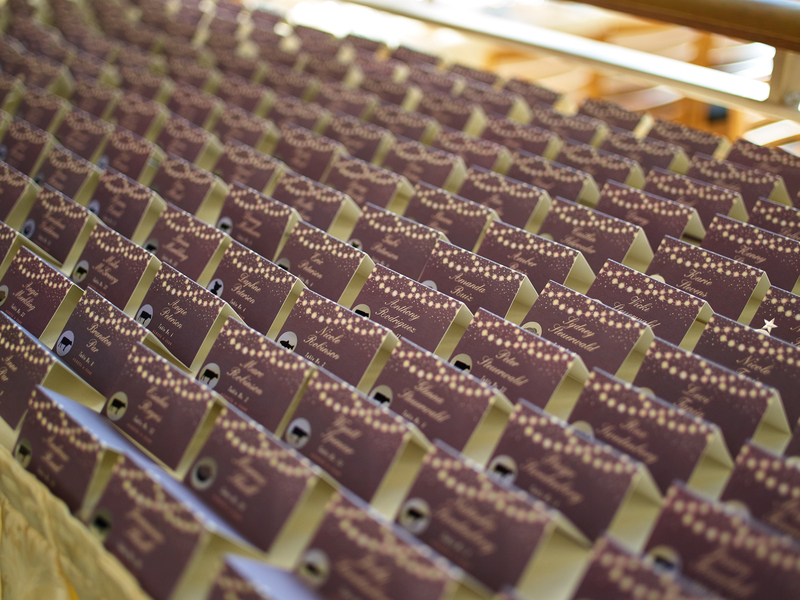 Terin_lynn says, “Definitely had a few close friends RSVP the ghost me on the wedding.  Just an eye opening experience for me and knowing who my real friends are.”  And n.edus says flat out, “People use friend too loosely. That’s not a friend, more like an associate would do something like that.” 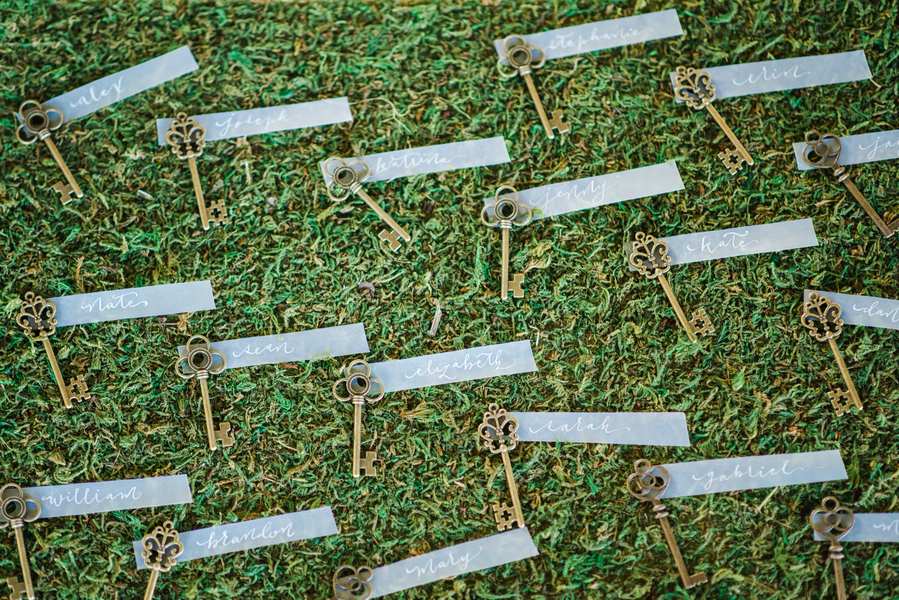 Out of all the comments, I could only find one that spoke of forgiveness and according to risspow_ it’s, “Only because Jesus told me to forgive!” 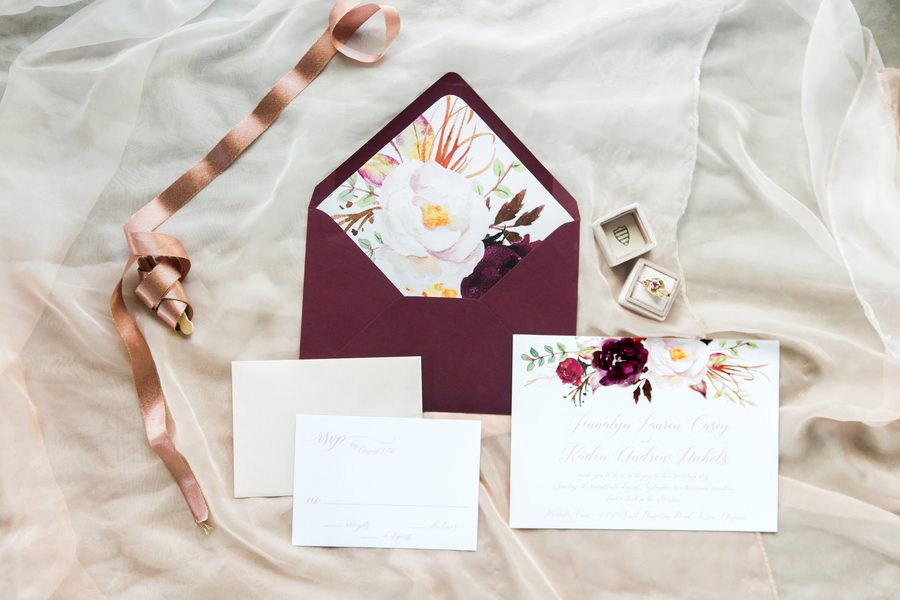 All in all, mommy_of4_ sums up the gist of the majority of our replies with her thoughts. “Never again would they be considered to any other event, weddings are not only expensive but it’s whirlwind of emotions and stress.  The should have the decency to call, text, or email.  They’re staying on 2017”. 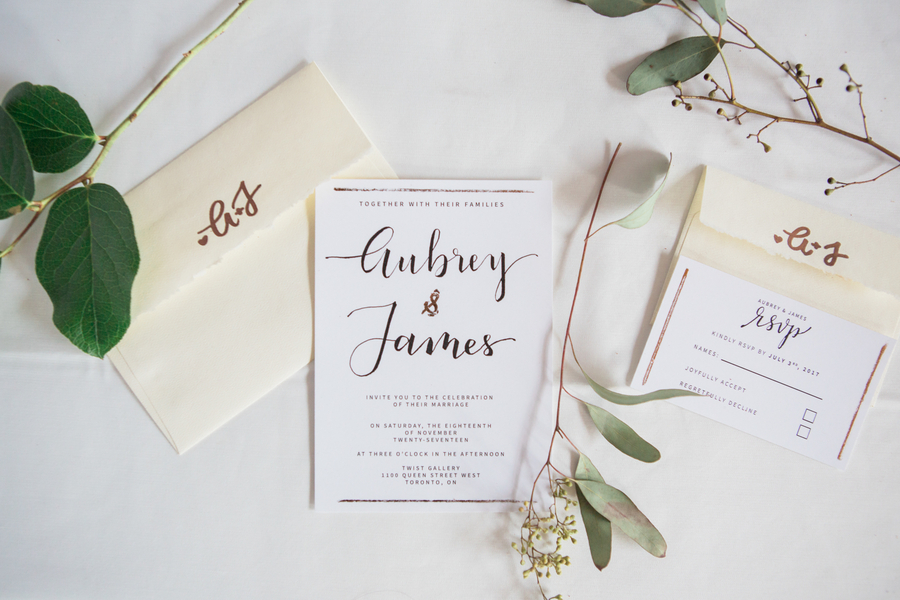 Well put!  People put a lot of work into planning the wedding of their dreams and if you are invited it is because they think you are important enough to witness one of the most important things that they will ever do.  To not show without so much as an explanation is grounds to immediately terminate the friendship because that person obviously didn’t think to much of the friendship in the first place.  And in a final thought of pettiness…would it be wrong to send them an invoice?