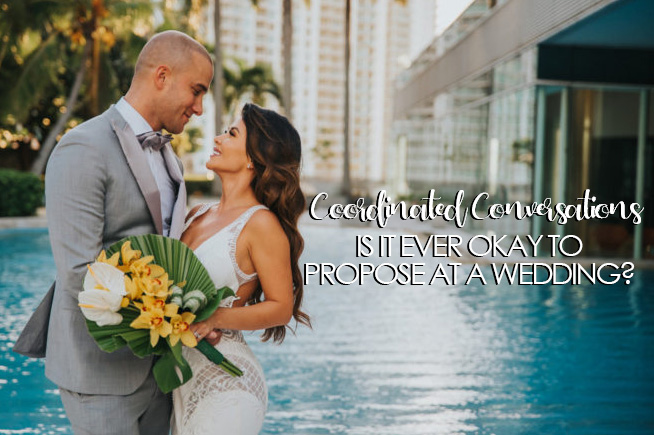 Coordinated Conversations: Is It Ever Okay To Propose At A Wedding?

We’ve seen it go viral a million times, a proposal during someone else’s wedding, but the real question is, is it acceptable? We recently asked this question to our Bride Sisters – if a close friend approached you about proposing during your reception, how would you reply. While we weren’t surprised, some of the responses we got were definitely unexpected!

Many simply agreed with Bride Sister @lungz404  when she said “Absolutely NOT!! It’s my day, why steal my thunder??” While a proposal could be looked at as trying to steal someone’s thunder, what if you were asked to be apart of the proposal and the couple was close to you?

Bride Sister @pelese confirmed she would be more than happy to share the moment by stating, “Yes! That 10 minutes or so wouldn’t hurt my day at all. I would love to be in on the surprise.” @nellera_nay agreed and added “Depends on how close we are. I might actually help him plan it, do it at the toss and give her my bouquet 😊”

@diambalb had us take things into perspective when she said “Not sure how I feel about this one, but would they want that happening on their wedding too? There’s 365 days in a year.” Which is absolutely true, out of all days in the year, you chose to want to propose on my special day?!

For the most part, all of our girls stood firm in their decision to kindly decline such a surprise. As @events_by_sheavonne said “No I think the married couple should be the primary focus at the event.” Which we happily agree with. But to each their own!

If you want to have a close friend propose and share in your special day, then more power to you, because most of us would simply not! And if you’re thinking about asking a friend if you can propose at their wedding, consider one thing first, would YOU mind, if it were YOUR wedding?