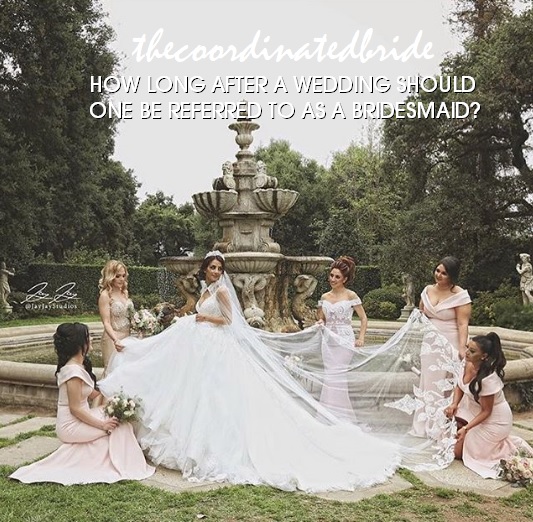 Coordinated Conversations: How Long After A Wedding Should One Be Referred To As A Bridesmaid?

We all know, it’s an honor to be in someone’s bridal party, you’re first in command when it comes to anything wedding related. But what happens when the wedding is over, should your title be dropped? Should you go back to your pre-wedding title as best friend, sister or bestie? Or will you be referred to as a bridesmaid from now until forever when it comes to that bride? We asked our #TCBBrideSisters if this is actually annoying or if someone should feel special because they were given that title, and here are the responses we got! 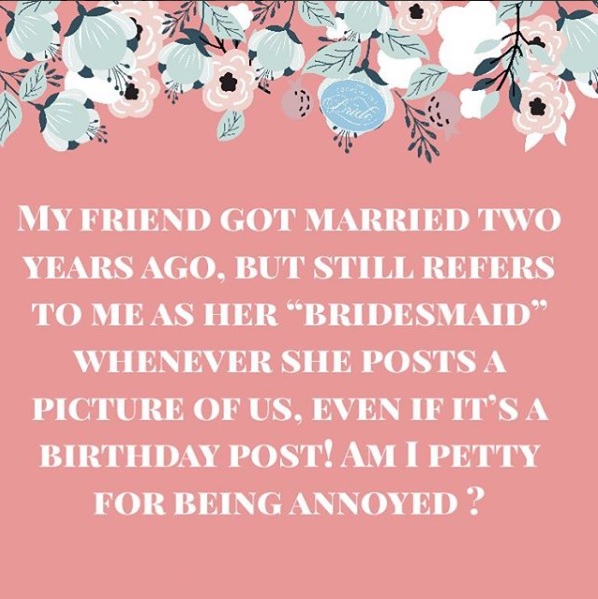 Bride Sister @smart_cookie86 tried to help us see it from both sides by saying “Well I think maybe her friend is still excited. Probably still in newlywed bliss. However, you were her friend before the wedding and you are her friend after the wedding. The title should change unless she is referencing her wedding. Also, consider that being a bridesmaid is an honor and she holds you in high regard. There are many reasons to be mad, this isn’t one…although it probably is a tad annoying.”

@lovesimone3 gave some tough love by stating ” There’s never a cut off point for this lol you are one of her bridesmaids and she honors you that way. It’s never going to be forgotten. Suck it up buttercup.

@adaachina opposed those who considered it a high regard and agreed to there being a cut off time, she added “Lmao this is super annoying and selfish. Life doesn’t revolve around the fact that she had a wedding that you were a part of. Life goes on and you were her friend first. I would be super annoyed”. @Ladylafi also jokingly said “Absolutely not petty. Ask the bride who were you to her prior to the engagement??? Then once she says so then tell her to go back to that….your Name…her friend!!”

Former bride @beingmarieanne had no idea people would be annoyed with these titles at all and stated “I didn’t know this was a thing. I think it has more to do with how they view their relationship. I think it’s endearing. A bridesmaid stands by the bride on one of the most memorable days on her  life. #Forevermybridesmaid and i will always be #foreverherbridesmaid!”

Bride Sister @shayd0918 reminded us of that one person we all have on our timeline when she mentioned “Omg annoying AF! I know someone who would do something similar. Everytime it was someone’s birthday she would post her wedding photo with said person in it. It’s like are you saying Happy Birthday or you just want people to see your damn wedding photos again and again. I’m just different I guess like yes I’m married but I don’t do all that extra stuff”.

So what do you think ladies, is it annoying or is it an honor? It’s easy to give a birthday shout-out and mention all the roles someone has played in their life and it can also easily be annoying if it feels like your original role as a friend has been replaced with a wedding title. At the end of the day it depends on the person and their relationship with a bride, we advise to just use your discretion!