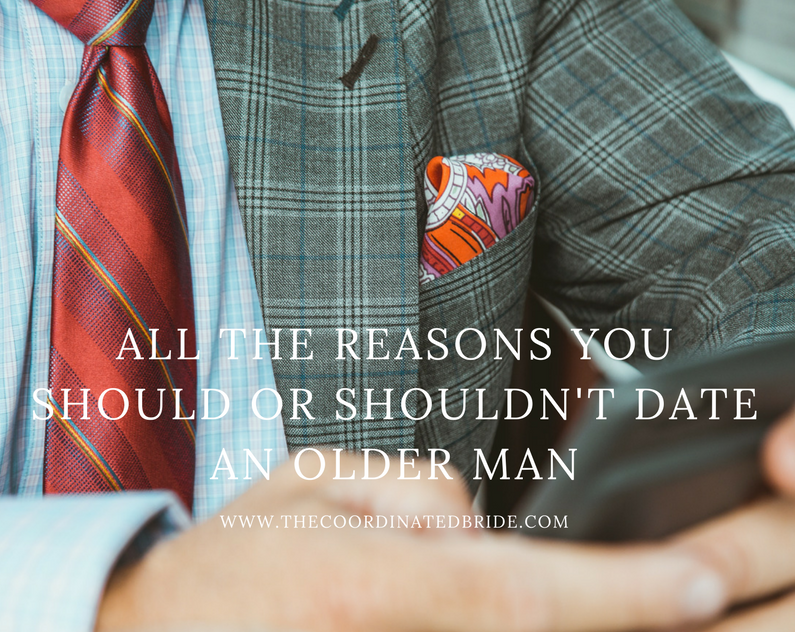 Coordinated Conversation: All the Reasons You Should or Shouldn’t Date An Older Man

Two years ago, my dad and I shut down the bar at an old New Orleans hotel. Like literally, the bar back had cleaned from top to bottom, and the bartender was standing at the end of the bar, practically begging us to hurry up. We had beers and apple martinis over conversations about politics, religion, money, and fell somewhere in between family and relationships. We got on the topic of who I was dating – where he asked if I was a lesbian, because I don’t bring any guys around. After a long sigh, and me mentioning there’s nothing wrong with being gay, thats just not me – I told him every date seems to start out good – but the relationship always takes a sudden deathly turn, crashing into the earth’s atmosphere, bursting into flames, and then eroding under the surface of the earth, dead and buried.

The rest of the night was a blur, except for the moment he said – “to be honest sweets, you really need to be dating someone 5-10 years older.” That comment always stuck with me, but you never believe your parents until some stranger validates it right?

Fast forward to earlier this week, when I hopped in an Uber on my way to the airport. The driver struck up a conversation starting with bad Uber customers, to his entire relationship history, and ending with him saying – “to be honest, a lady like you, really should be dating someone 5-10 years older. I began to think, maybe they’re right, hell it worked out for lots of people, Mr. Big was 11 years Carrie’s senior. Jay-Z and Beyonce are ten years apart. John Legend has Chrissy Tiegen beat by 7 years. Perhaps there’s something to this dating older men thing, and after doing some research over a few cocktails with friends, here are the pros and cons of dating an older man.

“Better Sex, said Lindsey. “Older men are experienced, so the sex turns out much better. They’re also typically straight forward about what they want out of that relationship.”

Disclaimer: Just because someone is older, does not make them mature.

Dating an older man usually means they have more life experiences. The downfall is, you and older men may not have much in common,“ commented Allison. “What’s funny to you is immature to him, what’s classic to you could be teenie bopper to him.”  “Also, for them (older men) dating a younger woman is an ego boost, so get ready to deal with that.”

Older men can be stuck in their ways, always the teacher never the student. For example my ex got boring during sex after a year or so. Another con is that older men take medicines, and come with a few more ailments. Ask yourself when dating someone older – are you ready to be someones nurse?”  Kim digs in, “The mysogony can also be a huge problem. Its rare to find an old school man that’s a feminist or equalist.”

Lauren said between sips, “Although older men are more sexually adept, they may not be as open to trying new things like younger men., unless they’re coming out of a boring marriage – then they can be very receptive to exploration.” “They typically tire after sex and their parts may not be as up for the job. On the bright side, they tend to take care of everything. They won’t hesitate to pick up the check.” “I kept going out with a guy who would give me $60-80 cab fare, even after I told him it was only $40 dollars including tip.”

Disclaimer: This is in reference to older men that have their stuff together, because what’s the point of dating an older man that doesn’t?

“Dating an older man means stability. They’re already settled in their career. You also know exactly what you’re going to get. At a certain age a man is who they are, no more figuring themselves out, no more growing into a maturity level,” explained Dahra. “What you see is what you get. Also, they offer life and career advice, older men have been through it already, so they can teach and you can learn.”

Jill expands on a major con, “He was just in such a rush to do everything. He was too quick about me meeting his family, getting married, having kids. We’d only been together for like two weeks.”

“Older guys have a teacher mentality, and can sometimes be condescending,” said Arielle. They’re also not typically open to free thought, but again that could just be the idiots I dated.” Her advice – “ think of your priorities, and keep them in mind with whoever is next on your list. Don’ts settle for anything less than your priorities. The “universal” perfect guy might be different than the perfect guy for you.

So as I swiped through Tinder this morning, I kept these details in mind, reconfiguring my age range from 26-31 to 27 – 35. To date an older man or not to date an older man, that is the question – or is it the answer. The verdict is still up in the air. We’re curious about what you think. Have you dated an older man, share your experiences below.