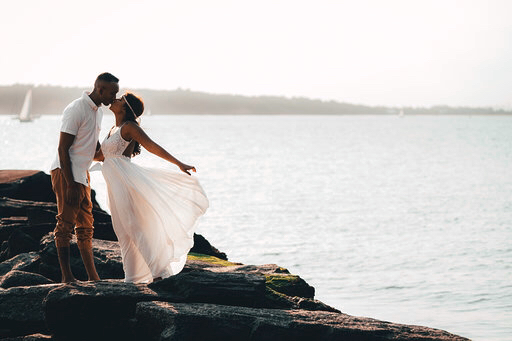 Us Against The World – Priscilla and Chres, A New York Engagement Shoot

“It’s us against the world” – Those were the words Chres said to Priscilla when he was deployed overseas in 2014. This saying has stuck with the couple throughout their entire relationship together. Fast forward to five years later on March 30, 2019, when Chres proposed to her. It was a beautiful day that started off with the couple going to the Vessel, and a walking tour of Central Park. Chres asked their friend, Sapan Patel, to secretly take candid photos of them throughout the day. They then went to Witches Brew, the location of their first date. That’s where a “tea date” turned into a proposal. As Priscilla said, “It really will always be, us against the world”.

For their engagement photos, they wanted to emphasize their Indian culture, Chres’ career in the military and their love for the beach. They eventually decided on Morgan Memorial Park in Glen Cove, New York. This amazing couple is just 10 months away from their wedding and we are wishing them nothing but the best during their journey down the aisle!

Check out the gorgeous images below, captured by Sapan Patel.