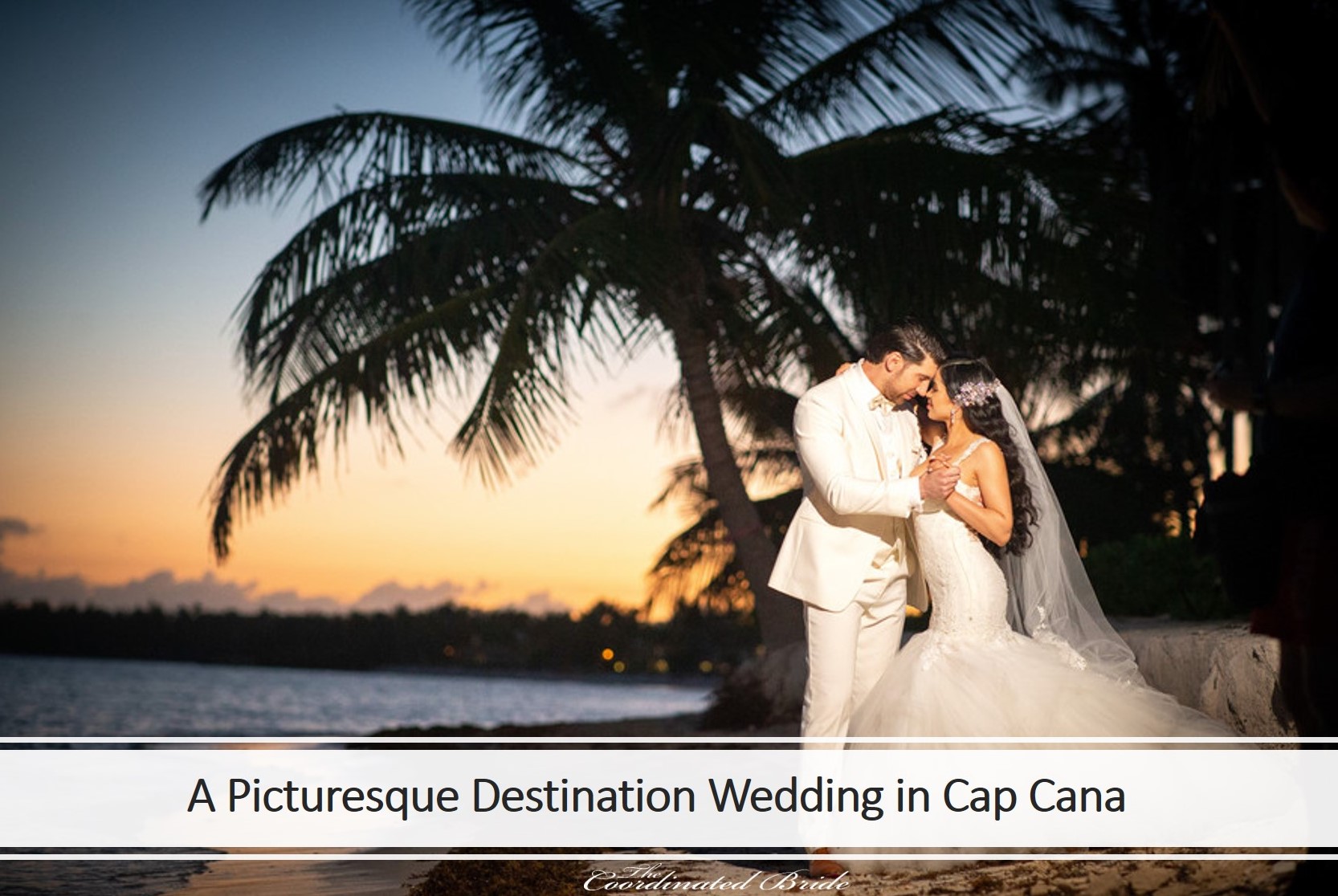 The couple in this destination wedding are picture perfect, just like their Dominican Republic wedding location! As a little girl Angela always dreamed about having a fairytale wedding and finding her prince. Over time that changed in part because of her nearly 20 years of experience in wedding planning and floral design. What became clear to her and ultimately inspired her wedding day is the simple idea “less is more”. Importantly, much of the elegance and pageantry that brides desire on their special day can be seamlessly integrated by incorporating elements that hold significant cultural value to the couple and their respective family’s. With this is mind Angela set out to match elements of Old World majesty with a modern spin set in blush and neutral tones that still allowed them to pay homage to their shared Catholic faith.

Like many modern love stories Angela and Justin met through an online dating app and had a romantic first date in Asbury Park, New Jersey. After about a year and a half they got engaged during a trip to Cartagena, Colombia. Knowing that Angela was a wedding planner Justin knew that he would have to do something special. Justin arranged a very special proposal with the help of the staff at LM Boutique Hotel. The proposal included a seashell path that led to a large heart situated in front of the sunrise on the Rosario Islands off the coast of Cartagena during sunrise. Within the heart was a message written in large white letters created from small white pebbles and oyster shells that asked Angela to marry Justin. The sunrise represented the start of their journey towards getting married, while the sunset that occurred on their wedding day marked the end of that period and the start of their life journey together.

Angela wore a custom designed wedding dress by Israeli fashion designer, Galia Lavah. The bride had long admired Galia Lavah’s bridal vision as it is a style that truly complemented aspects of her own floral design. The dress was body-hugging with a low back, an extravagant tulle skirt, and included top floral appliques with hand beaded pearls and Swarovski crystals that created the illusion of an open back look. The bridesmaids wore a Sherri Hill blush silk dress that was both elegant and chic. Groomsmen wore an ivory-colored tuxedo to compliment the pastel colored beach and warmer tones of the nearby sea and sky. The groom wore a custom-made white tuxedo for the occasion. The bride and groom further personalized their special day by adorning their respective Louboutin shoes with Swarovski crystals.

As a floral designer, the bride is a lover of flowers and so simple, clean, but still elegant floral design elements were incorporated during both the reception and ceremony. The bride bouquet was designed by the bride with all white preserved gardenias with Swarovski embellishments from Maison LaFlevr. The bridesmaids’ bouquets were made of blush pink peonies also designed by the bride. In addition, we had a floral backdrop of all white hydrangeas and blush roses—this is where the bride and groom had their “first look” while overlooking the turquoise colored ocean. It also became the go-to place for guests to take photos and selfies.

Angela describes the most anticipated or special moment of the wedding day: “Our first look! That moment when you see the groom/bride for the first time in your wedding attire. There was so much planning to make that moment extra special and to finally see the person you are going to marry for the rest of your life was thrilling. Things did seem to move quickly up to until that moment, but after the reveal the day seemed to fly by!”

The backdrop and venue for the wedding day was a stately French Chateau inspired villa which represented their shared ancestral lineage, but in Cap Cana, Dominican Republic the country of Angela’s youth. The ceremony, officiated by the Archbishop of Santo Domingo, took place in a quaint, ethereal chapel and incorporated all of the traditions of a sacramental marriage. As they left the ceremony as husband and wife for the first time—cast against the vibrant colors of the setting Caribbean sun—Angela and Justin released white doves before hopping into a vintage 1940s convertible roadster and headed to the reception!

Both the ceremony and reception were decorated all white with blush elements. While the reception was reflective of the white and blush colors that have deeper meanings related to purity. This theme was extended with centerpieces designed by the bride – all white hydrangeas, blush peonies, roses, phal orchids and blush cherry blossom trees, set in a clear tall cylinder vase. The sweetheart table was adorned with a DIY masterpiece table skirt created by both the bride and the groom with real touch silk blush roses—it was the wow factor of the reception. In the main doorway entrance we had two silk cherry blossom tree that represented both the “spring” season that the couple met, but also the beginning of something new! Personalized gold-painted oyster shells with guest names and corresponding tables were strategically placed in a sandbox just inside the main entrance to further accentuate the Caribbean-inspired theme. Guests’ tables were decorated with a white sequin tablecloth accompanied with Chiavari chairs with matching chair-covers. Personalized menus and gold mirror acrylic laser cut place cards were situated atop clear glass dinner plates. Each guest received a singular preserved white rose showcased in a clear acrylic box provided by “Maison LaFlevr”; a sister company that specializes in home décor owned by the bride.

At church a live band played the couple’s special songs during the ceremony and an opera singer performed the Ave Maria (the bride’s dream came true!). At the reception’s entrance, they had two human champagne tables where the guests were able to pick up a glass of champagne as they walked into the outdoor front atrium of the villa during cocktail hour. There was a live-band that included a violinist playing the bride and groom’s favorite songs at the cocktail hour.   Guests later illuminated the atrium using sparklers and lined up to form a tunnel for the bride and groom when they arrived. This was a magical moment for the newlyweds – as it was the first time they were announced as Mr. and Mrs. One of the finest chefs from the Dominican Republic was selected for the affair ensuring that the bride and groom, and their guests, dined on their favorite dishes from both land and sea. An award-winning mixologist provided signature cocktails aptly named the “Blushing Bride” and the “Dashing Groom” and served in glasses personalized with their wedding logo.     The logo was also embossed on the dancefloor as well as the runner at church adding those subtle details that really help personalize a wedding’s design. The first dance was set off by a plume of water vapor that mimicked the property of clouds and the celestial feeling that both the bride and groom felt that evening. This was the first of many dances that evening, which also included a belly dancer and all white masquerade shows, both entertaining and equally encouraging guests to continue dancing.  Last, but certainly not least, was the cake. Again, reflecting the couple’s desire for a simple, but elegant theme the five-piece layered cake with finished with an antiqued fondant and topped with Swarovski crystals strategically placed in the form of the bride and groom’s initials

DO NOT ever plan your own wedding even if you happen to be the most talented wedding planner. Your wedding day is one of the most significant and special days of your life, taking on the additional burden of trying to coordinate the logistics while trying to savor the moment is not something I would recommend. There are so many things that occur during the wedding day and being a bride is stressful enough, allow a planner to take control and pamper yourself instead. Hiring a wedding planner, even if it is only for the day of, and practice delegating if you happen to be a control-freak like I am because the emotions you experience as a bride are real and focusing on other things can take away from that special moment. Additional advice that I would recommend to those future brides out there that are hell-bent on planning their own wedding, avoid doing a destination wedding in part because identifying vendors that can deliver your vision is taxing. On numerous levels I was lucky to have established contacts and amazing vendors such as True Love Wedding who I have worked with in the past locally in New York and could rely on to fly to the Dominican Republic, however most brides will not have this luxury. Spending a little more money to hire professionals, who have the experience of doing a destination wedding is the way to go, and will save you many headaches!