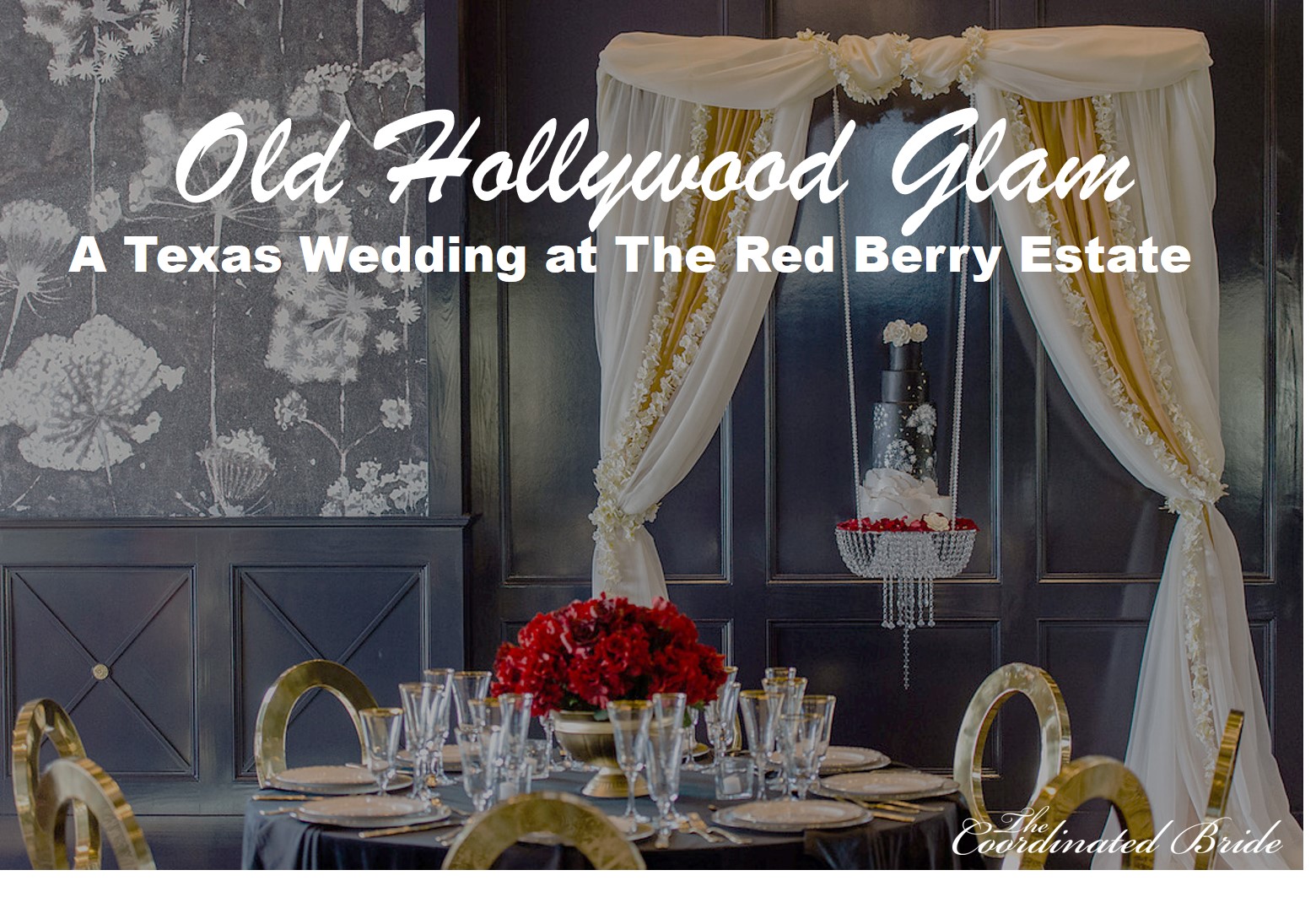 This old Hollywood glamour-inspired styled wedding took place at the newly restored, renovated, and redesigned lakeside venue—a French chateau-styled mansion built in 1951 that was owned by Virgil Edward “Red” Berry. He was widely known for his involvement in (mostly illegal) gambling in the area for decades. The Red Berry Estate in San Antonio, Texas just so happens to be the newest, most illicit, and sexiest venue on this side of the San Antonio River. Well, actually on both sides. From the sizzling 1920s to the Golden Age of Hollywood, glitz and glamour continue to be iconic inspirations in modern-day wedding styling. Inspired by a few quintessential starlets of the era such as Audrey Hepburn, Elizabeth Taylor, Grace Kelley and influential music artists including Frank Sinatra and The Rat Pack, Old Hollywood glamour entertainment is at the heart of this styled shoot.

The Red Berry Estate is not only one of the most fashionable and glamorous venues in the city, it also has a history steeped deep in scandal. This old Hollywood glamour-inspired shoot took place at the newly restored, renovated, and redesigned lakeside venue—a French chateau-styled mansion built in 1951 that was owned by Virgil Edward “Red” Berry. He was widely known for his involvement in (mostly illegal) gambling in the area for decades. After serving in World War I, Red Berry won the title (deed) to 84 acres just south of the San Antonio U. S. Army post—Ft. Sam Houston—in a gambling bet.

On these 84 acres, he built this three-level house that served as one of his gambling operations. The basement (built into the side of a hill) housed a full casino. During the felonious gambling nights, Berry would frequently post lookouts on its second floor and balcony terrace because of the clear view of all the approaching highways. However, a police raid in 1955 permanently closed down this illegal gambling ring. In 1960, Red Berry went on to run for the Texas House of Representatives with the goal of restoring his good name and to push for the legalization of pari-mutuel wagering on horse racing in Texas. He served three terms in the Texas Legislature and then went on to be elected to serve two terms in the Texas Senate. He died during his second senate term in 1969.

More recently; however, the RK Group purchased the Red Berry Estate with the goal of bringing this historical landmark back to life. (Covid-19 delayed the renovation, and subsequently, this styled wedding shoot that was originally planned for much earlier this year.) By mid-October, most of the renovations had been completed.

For the bride, Glam On Demand created a luminous, classic look with vintage waves, a sexy red lip, and sultry eyes. The look was completed with an Ovia gown by Enzoani of Olivia Grace Bridal. This gorgeous mermaid gown left us absolutely speechless. With side illusion panels, stunning embroidered Indian beading, a full, tulle train that sweeps at full cathedral length, this gown screams Hollywood glamour.

The groom looked as dapper as Humphrey Bogart in a polished and sophisticated black tuxedo with matching black bow tie from Rex Formal Wear. He spent some time in the mansion’s casino level before meeting his bride for a first look. This room, with a speakeasy entryway, includes a library, lounge area, and will soon be completed with poker, roulette, and craps tables. A hodgepodge of Italian and French antiques and memorabilia pay homage to the late Mr. Berry and his love for gambling and horse racing. There are many trap doors in the mansion and the one in the casino-level is used as an entryway to the kitchen.

The bride and groom saw each other for the first time outside in the garden between the mansion and the lakeside ballroom. The couple whispered sweet nothings to each other, took a private walk, and enjoyed each other’s company before the ceremony.

The two exchanged rings in a private ceremony on the mansion’s lawn overlooking the 12-acre lake which is a mere 10-minute drive to downtown San Antonio. The lake has three built-in water fountains which can be illuminated at night with color-changing LEDs. There are also two Duffy boats on the lake used for private rides, intimate toasts or dinners, and backside views of the mansion.

Illusions Rentals stopped at nothing when it came to fusing those good old Hollywood vibes. The tables were dressed with an assortment of red, black, and gold sequenced linens. Variation centerpieces including compotes of red roses, vintage stacked books with white florals, and trios of white pillar candles were centered amongst gold chargers and gold accented china and goblets. The sweetheart table dazzled with tall pillar candles and a show-stopping ostrich feather centerpiece.

Tucked away in the corner, Laura, of Snap Chic Wedding Painting, recreated the scene with an acrylic painting of the ballroom as seen through her eyes.

Another trend we’re sure will spark ignition into the new year is this ravishing, suspended cake atop a crystal chandelier. This black buttercream three-tiered cake with translucent wafer paper ruffles looks as good as the white velvet, lemon, and chocolate layers taste. We especially love the way Adesewa of Luxe Appel hand-painted the white dandelions to match the ballroom walls.

And, we just couldn’t forget the classic champagne tower. The champagne tower can be added to any black-tie event when you’re looking to impress. Always invite with a uniquely made invitation like the ones Aly Am Paperie custom designed.

After toasts were made the bride slipped into her second dress (because nothing evokes glam like a theatrical costume change). The bride wore Norianna by Enzoani of Olivia Grace Bridal. A full-length mermaid gown made of a soft, sleek stretch georgette, combined with a deep plunging neckline and illusion side cutouts, complete with a center slit.

The bride and groom headed out for a private ride in the venue’s Duffy Boat before their official exit.

After an exhausting, yet exhilarating, 13-hour day, we ended the night with a bang—literally! Pro FX, Inc. pulled out all the stops with three different firework displays to send the couple off in style. The couple drove off into the night through an entire tunnel of cold sparklers in a Polaris Slingshot provided by Royal Exotic Rentals—we’re sure even Gatsby would approve of this sleek roadster.