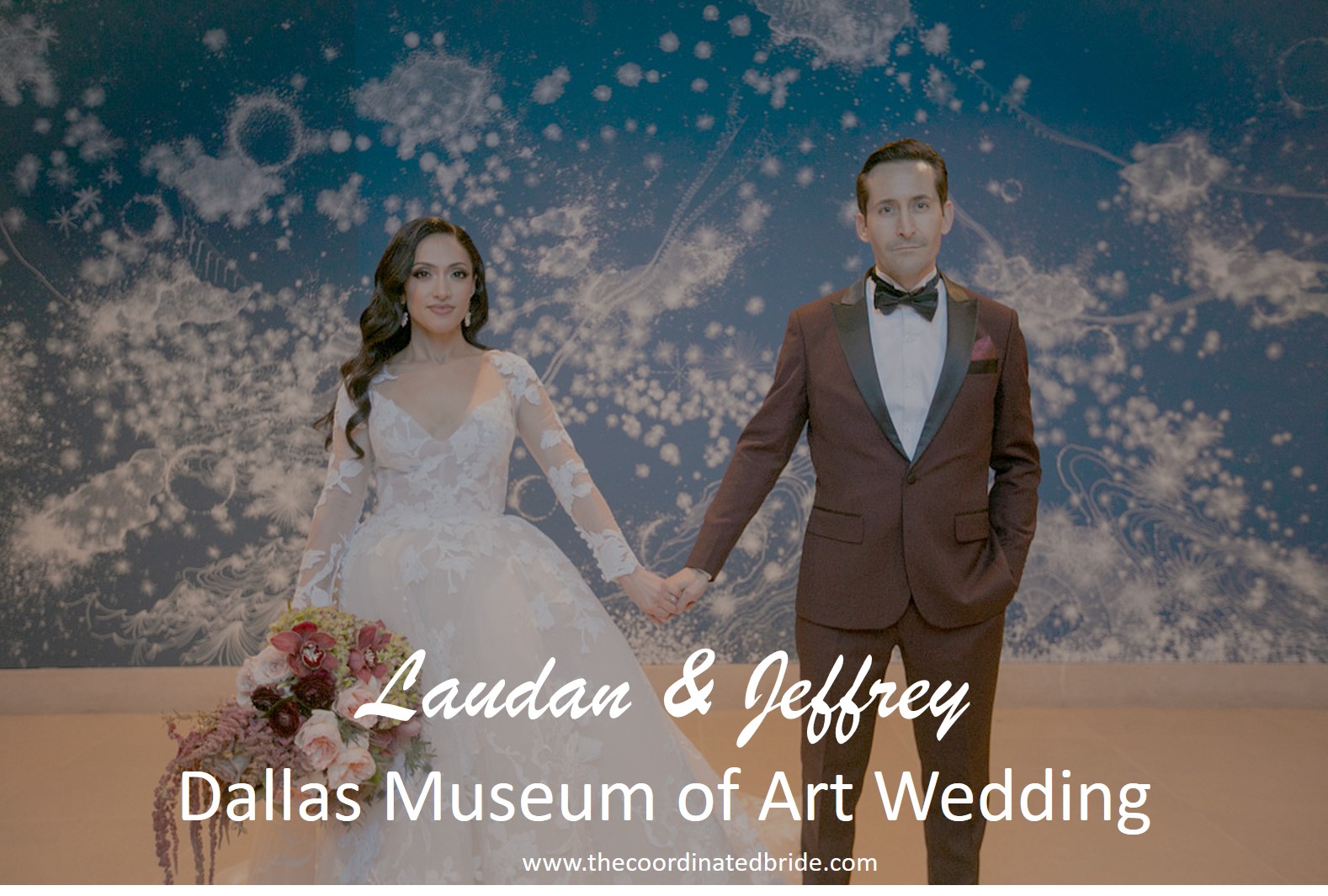 Laudan & Jeffrey’s (Jeff) wedding at the Dallas Museum of Art included a traditional Persian ceremony (Laudan’s family is from Iran) with modern elements.

Laudan & Jeffrey met at Barry’s Bootcamp in Dallas, a boutique workout class. They attended the same morning class each week routinely, so Jeff introduce himself to her one day. Laudan moved to Austin and wasn’t in class for several months. She returned to Dallas to visit family and ended up at Barry’s Bootcamp. Jeff took the opportunity and asked her out.

Laudan completed her first Olympic triathlon in Orange County, California on June 2nd, 2019. After the race, they drove down to San Diego where they would be staying for the following week. On June 3, 2019, Jeff told Laudan he had a surprise for her. He drove her to a marina where a beautiful 55-ft private yacht was waiting for the two of them, set up with Laudan’s favorite wine (Kim Crawford) and charcuterie. They set sail and yachted around the San Diego harbor for about an hour until it parked in front of a beautiful downtown skyline view. It was there, at the front of the yacht that Jeff got on one knee and proposed!

The very next day after the proposal, the pair started hunting for a wedding planner. They knew that they wanted someone experienced who had their finger on the pulse of the “creme de la creme” of vendors that could make a dream wedding happen seamlessly. After whittling down a list to 3 planners and interviewing each one, Jeff and Laudan decided to go with Jacqueline Hill of Jacqueline Events & Design. Since their objective was to avoid the lengthy research it would take to find the best vendors, they put their faith and trust into Jacqueline for recommending the vendors.

“The wedding day was purely magical. The Persian ceremony typically incorporates a sofreh table (ceremonial table) that is filled with various items that represent aspects in life such as health, love, fertility, wealth, etc. The couple gets seated at the head of the table as they look on into a mirror that is set before them to reflect light, truth, purity and reality. One of the traditions include the throwing of the rice at each other at the very end of the ceremony (Zoroastrian tradition), which is said to dictate which of the two wears the “pants” in the relationship based on who it was that threw the rice first (I won!).

What we decided we wanted was a modern wedding that felt “grand” without being gaudy. We knew we wanted it to be rich in color (not traditional white), and ended up choosing jewel tones such as sapphire blue, ruby red, amethyst purple, etc. Given that our venue was an art museum which is by design all neutral walls and floors with a large vaulted ceiling, we wanted something that could fill a large room and make it feel intimate yet sophisticated. Our florist, David Kimmel of David Kimmel Design, helped execute our vision with a combination of sculptural and floral arrangements. The floral arrangements included varied types of flowers including roses, hydrangea, thistle, stock, orchids, and heavy textured greens. We also decided to hire a 12-person band as well as a Persian DJ, which ensured that the dance floor was never empty. The dinner was served as a buffet so that tables never had to sit down for long periods of time, waiting for food but rather was a very social and active scene with people mingling constantly.” – Laudan

“My very favorite moment of our wedding day was walking down the aisle with my mom and taking every single moment in. I made sure to stop before I started the walk, take in the sight of how many of our loved ones (practically all of them) were there filling the room, the sound of the string quartet playing, the vision of my future husband at the end of the aisle, gazing down lovingly in awe at me. It was the best minute or two of my life as we walked down towards him, and when he received me at the end and walked me to our seats at the head of the table, I felt like I was in an absolute fairy tale, marrying my prince.” – Laudan

“This is a tough question because I had so many “favorite” memories about the wedding. Forced to chose, I would say that my very favorite moment was when we made our entrance into the reception and descended the grand staircase at the DMA to greet all of our smiling friends and family cheering our new marriage.” – Jeff

“Think about what you can give to the relationship vs. what you can get from it. If each partner does that, amazing things happen.”