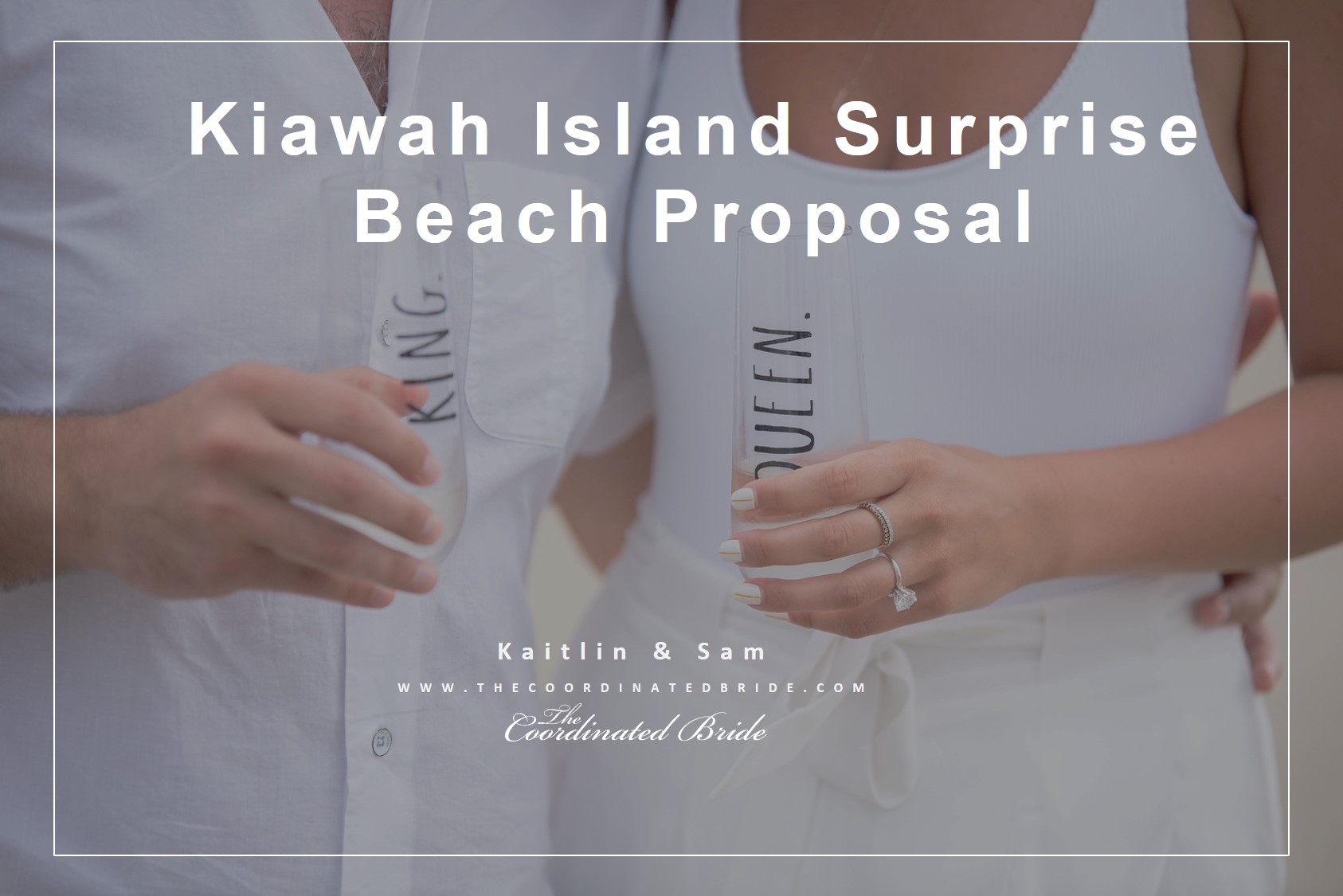 For years, Kailtlin’s family has been going to Kiawah Island in South Carolina for their summer vacation over the 4th of July. It’s one of Kaitlin’s favorite places; so when Sam was ready to propose, the location was a no brainer! He and Kaitlin traveled from Los Angeles, California to join her family on Kiawah Island for a week long trip! Sam knew he wanted to propose on the 4th because he knows how much Kaitlin enjoys celebrating it! However, getting her out of a bathing suit was the biggest question!! How are we getting Kaitlin into normal clothes on the 4th!? …so Kara, Kailtin’s bonus mom, staged a family picture on the beach to entice Kaitlin to get dressed! …and although she looks GORGEOUS, that white “top” is actually a bathing suit! Kara told everyone to wear, read, white or blue…and it’s just by chance that Kaitlin wore all white for her Kiawah Island Proposal!!

From The Coordinated Bride to Be, Kaitlin

Sam and I met in the fall of 2016. I was out by the pool in my community when he came to visit my friend/neighbor, who happens to be his cousin. We were both in relationships at the time, but after a few months passed we were both single and he asked his cousin for my number. He called me to ask me out to our first of many dinner dates, which was at Fig & Olive on December 9, 2016. Our last first date. We went on dinner dates every night for the next week, and then he drove me to LAX (Los Angeles Airport) (that’s true love) because I was going back to North Carolina to spend Christmas with my family.

From our very first date, Sam and I were on the same page. It was an instant connection, and we haven’t stopped laughing and having fun together since! We don’t agree on everything, but our relationship is a constant adventure. Sam is one of the most generous people you’ll ever meet and is always taking care of those around him. He is my partner in life who always looks out for my best interest, is selfless with his love, and never makes me question his loyalty. He has always supported anything I want to do or be and let’s me be myself no matter what.

Sam and I come from very different backgrounds. I was raised in a small town in North Carolina, and moved to Los Angeles when I was 25. Sam and his parents (he’s an only child) immigrated to America from Armenia when he was 3 years old, specifically to LA where he has lived his entire life since. While our pasts differ, we are very similar. We always joke that no one likes to eat and relax more than we do. One of Sam’s greatest talents is choosing the best food! Luckily LA (Los Angeles) has all the food options you could want, and we take full advantage of that.  We also love spending time with our dog Dave, traveling (where we eat a lot, of course), live music, and anything involving a pool/ocean!  We are very social and we love to host in our home, which again involves lots of eating!

Sam cannot keep a secret and he does not like surprises, so the proposal was the absolute shock of my life!! Being together for 2.5 years, and attending weddings together, people were always asking when we would get married. This repeatedly asked question led to only one detail about our eventual engagement, and that was our dog, Dave, being included. Dave travels with us everywhere, so our annual family vacation to Kiawah Island (off the coast of South Carolina) was no different. Without my knowledge, Sam had been planning with the help of my family and especially my stepmom, Kara, for about a month. He had called my dad, my mom, and my brothers for their permission and blessing. Once he decided that it would happen at Kiawah, the challenge of exactly how began. I love the beach and I rarely get out of a swimsuit when we are at Kiawah, but since they had arranged for professional photographer Yasmin Leonard to capture the proposal, they had to make sure I was dressed. Every year we take nice family photos, so this was the perfect opportunity, and I was unsuspecting since it’s tradition. We went down to the beach where Kara set up her camera on a tripod and as we were posing, Sam turned to me and said “I love you so much” to which I responded “I love you too…” as he was getting down on one knee. I immediately felt like I was going to pass out because I was so surprised, but I managed to say YES and the photos following speak for themselves.

The ring is custom, from Ritz Jewelers in downtown LA. Sam is diligent in everything he does, and this was above and beyond! I was in such shock that I never even looked at the ring until my family asked if I had looked at it. It’s a 3.25 carat round-cut diamond with a platinum band.

We are excited to celebrate this new chapter in our story, and enjoy being engaged. The wedding details will come through thoughtfulness over time. The food will be one of the biggest priorities, as well as photos. I co-own a photography company called Pic Station, so a photobooth will be a must, and always captures such fun moments of your guests!