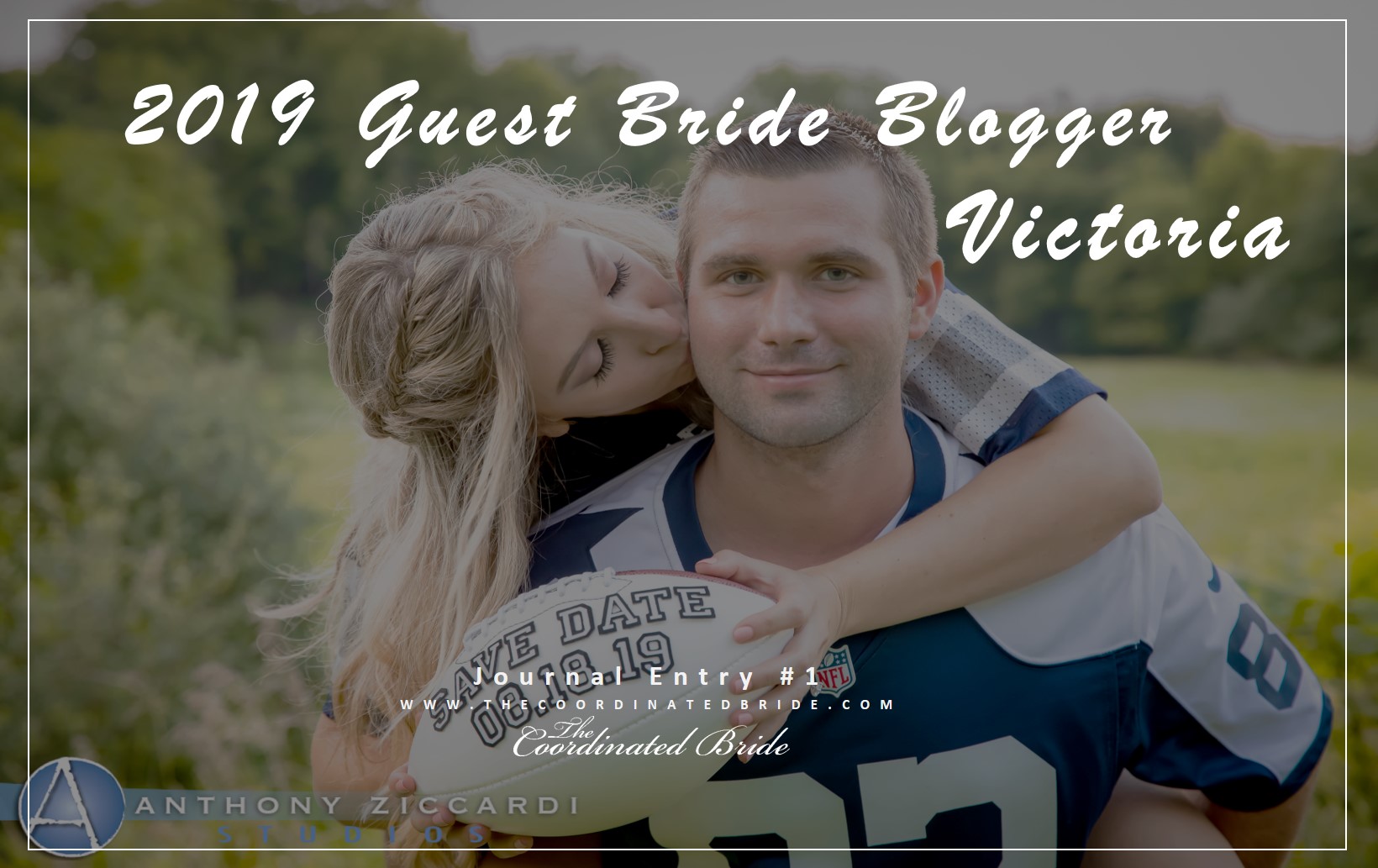 Victoria and Dylan are just 76 days away from their August 18, 2019 New Jersey wedding!   We’re excited to have Victoria as a 2019 Guest Bride Blogger so grab some coffee or tea and enjoy her first journal entry as she prepares to tie the knot.

“Ugh, it is so cold out. I definitely don’t feel like going to the gym tonight. It’s Friday, I should be going out. Who goes to the gym on a Friday night anyway? Summer will be here in less than 3 months. Fine, I guess I really should go.”

That is how it all started.  It was a cold February night in New Jersey, and I was fighting with myself on whether or not I should head to New York Sports Club. While on the treadmill with my headphones in, I figured everyone understood that I did not want to be bothered. I guess my current fiancé didn’t get the memo.  After a tap on the shoulder turned to small talk, Dylan asked to meet back up at the gym on Sunday to go through some workouts together. This wasn’t my typical first date, but I figured a change was exactly what I needed.  After the gym, he asked me to sabotage that work out session and go get pizza and catch a movie. Pizza was an offer I couldn’t resist. Unfortunately, I was thrown an unexpected twist when the date went south for the both of us.  Not only was there a blizzard outside, but my friend being our waitress made it nothing less than uncomfortable. A family friend who I haven’t seen in awhile came over and practically threw her baby at me.  Let’s just say holding a crying baby while partaking in small talk isn’t my ideal first date. When it was time for the movie, I thought, “OK, this date cannot get any worse.” Boy, was I wrong. The movie seemed never ending, and he chose sci-fi.  I hate sci-fi. When I finally arrived back home, I couldn’t help but think I would be single for eternity. To my surprise, he reached out soon after. We decided to give it another shot, which would lead us to a blissful future that I could never have imagined.

It only took a month for him to move in and begin our lives together. They aren’t lying when they say opposites attract. He was nothing short of a country boy.  He wore cowboy boots, drove a big truck, and listened to Zac Brown Band. I was a girly girl on the other hand. I enjoyed days spent in the city, pop music, and drove a small sports car.  Shockingly, he brought out a side of me I didn’t know existed. A change is what I needed, and a change is what I finally got. He got me back into my hobby of skiing and pushed me to go back to school for dental hygiene. I couldn’t help but fall in love with a man who motivated me to grow.

Traveling was an interest we both shared. Each vacation I excepted a romantic proposal on a beach in the Bahamas or at moonlit dinner in Hawaii. But when the question never came, I began to feel tortured.  After fifteen months, apprehension built up. “Will he ever ask me to marry him?” I thought. Finally, he offered to look at wedding rings. Once this occurred, I found myself shopping for outfits for every occasion, even events as common as pumpkin picking or a football game.  However, six months went by.  Six months turned into twelve months, and I began to wonder what was going on. Within the past several months, we went to the Caribbean to swim with pigs, we went to the Dallas Cowboys game, we went to New Hampshire,we went to Colorado, and still he did not pop the question.

After 3 years together, and fifteen months since we first looked at rings, he planned the last vacation that we would have the boyfriend and girlfriend title. My eagerness never faded, and I found myself back at the mall shopping for a whole new wardrobe. Within the first four days, we had fancy dinners, swam with dolphins, and partook in island excursions. The question still never came, and I was beyond discouraged.  I found myself messaging friends, telling them that this too was not the vacation I had expected. I began acting manic; rummaging through his belongings, checking jacket pockets, and searching his suitcase for the ring I’ve been craving. Still, there was no sign of an engagement or proposal in the near future.

By the seventh night, I came to terms with the fact that maybe it just wasn’t the time. To treat myself, I decided to get my hair blown out for formal night.  Everyone on the cruise would be wearing elegant dresses or a spiffy suit. After pampering myself, I met him by the elevator. He asked to go to the top deck to take a picture since we both looked our absolute best. I didn’t think much of it because I’m a girl, and what girl doesn’t love a good picture?  His perspiration was at an all time high. I remember asking if he wanted to take off his jacket, a question he was sure to ignore. When we arrived at the top deck, he grabbed both of my hands, and I couldn’t believe it was finally happening!  I expected it all along, and when I finally didn’t, here it was! They really do mean it when they say the best things happen when you least expect it!  He gave a breathtaking speech that threw me into shock. When he finally went down on one knee, he opened a little box. There it was, my diamond ring starring back at me. He didn’t even finish asking me to be his wife before I grabbed the ring and placed it on my finger. It was unquestionably stunning.

We decided to wait two months before discussing the planning, so we could enjoy the moment.  We got engaged on March 16, 2018 and decided to have our engagement party that June.  We invited our closest friends and family and had an extravagant backyard party at his aunt’s home.  We could not have had better weather; the sun was shining and there wasn’t a cloud in the sky.  It was on this day that we asked our army to be part of our wedding.  I had my dearest friends come with me in the morning to get our hair done before heading to the party. When I asked my bridesmaids and maid of honor to be a part of my special day, I showered them with gifts, a personal letter, a Swarovski bracelet that resembled a knot, and a cute Etsy mug that read, “I can’t say I do without you,will you be my bridesmaid?”  When the girls received their gift bags and read their letters, some laughed and others cried.  It was a surreal moment for my friends and I because I would be the first to marry.   Picking bridesmaids was not an easy process,which led to me having eleven bridesmaids in total, but you’ll hear more about that in my second journal entry scheduled to go live this Thursday, June 6!

Being the youngest in my family, I had the privilege to witness my brother and two sisters’ weddings in 2017.  I learned a lot from being a part of their planning. I realized what is important in life and what is not. Having two sons and no daughters, it is crucial to have my mother-in-law as involved with the planning as my own mother. This day isn’t just about my fiancé and I, but the two women who raised us. Throughout the planning I followed my motto, “If it is important to someone else, but it doesn’t matter to me, just say yes.”

When finding a venue, Dylan and I both agreed on a rustic feel. When we found the one, we knew the moment we entered. Dylan fell in love with the groom’s suite which resembled a man cave. The pool table, shuffle board, and the infinite amount of video games sold him. I was mesmerized by the outside ceremony area that consisted of a heart-shaped pond. A grand entrance is a must. What would be a barn wedding without animals? We agreed to have our flower girl, Aspen, walk down the aisle wheeling three mini pigs in a wagon. I am thankful for New York Teacup Piggies for making this possible.  When I begin walking down the aisle, I will pass two barrels filled with beautiful flowers to give a rustic feel. The two ring bearers will be carrying my ring on a pillow made from my mother’s lace wedding dress. When I reach the arbor that I will be saying “I do” under, tulle and silk will hang above and flowers will line the sides. Next to the arbor will be different sized tree trunks to continue that homey farmland feel. When planning our wedding, we wanted to do things out of the norm. Instead of a played-out flower wall, I ordered a seven-foot metal ring from the Ukraine. My florist will decorate the piece with lovely fresh roses and greenery. My guests will be blown away when they enter Bear Brook Valley and open their eyes to ten-foot ranch tables covered with roses and garland. High floating candles will also fill the table tops to give the scenery an elegant bright pop. As I mentioned before, my future hubby and I are opposites. When it came to choosing music, we just could not decide. To accommodate his family’s taste and my own, we agreed to have both a ten-piece band with a brass section and a DJ. With the planning still taking place, we have not decided on our final cake. However, we know we will order from no other than Palermo Bakery.  Their mouthwatering desserts are to die for! We will end the night of August 18, 2019 with a sparkler exit for one last celebration.

Because I have a large bridal party, I needed to figure out a way for everyone to turn heads. I decided on having my closest girls wear two different colored dresses, half will be wearing mauve while the others will be wearing nude. The groomsmen will be wearing all black, and the best men will have a mauve or nude vest to stand out. Since I was a little girl, I knew my wedding could not be ordinary. I am looking to have two dresses on my unforgettable night. For the ceremony, I will wear a rustic lace two toned gown and I will wear a glitzy white rhinestone dress for the reception.

Life has a funny way of unfolding. You never know what can happen at any given moment. Never did I expect my agonizing night at the gym to have a fairytale ending. I learned to enjoy life as it comes at you because everything happens for a reason. I am beyond blessed to have had this man enter my world, and I am forever grateful to live a life filled with love and happiness with the husband of my dreams!