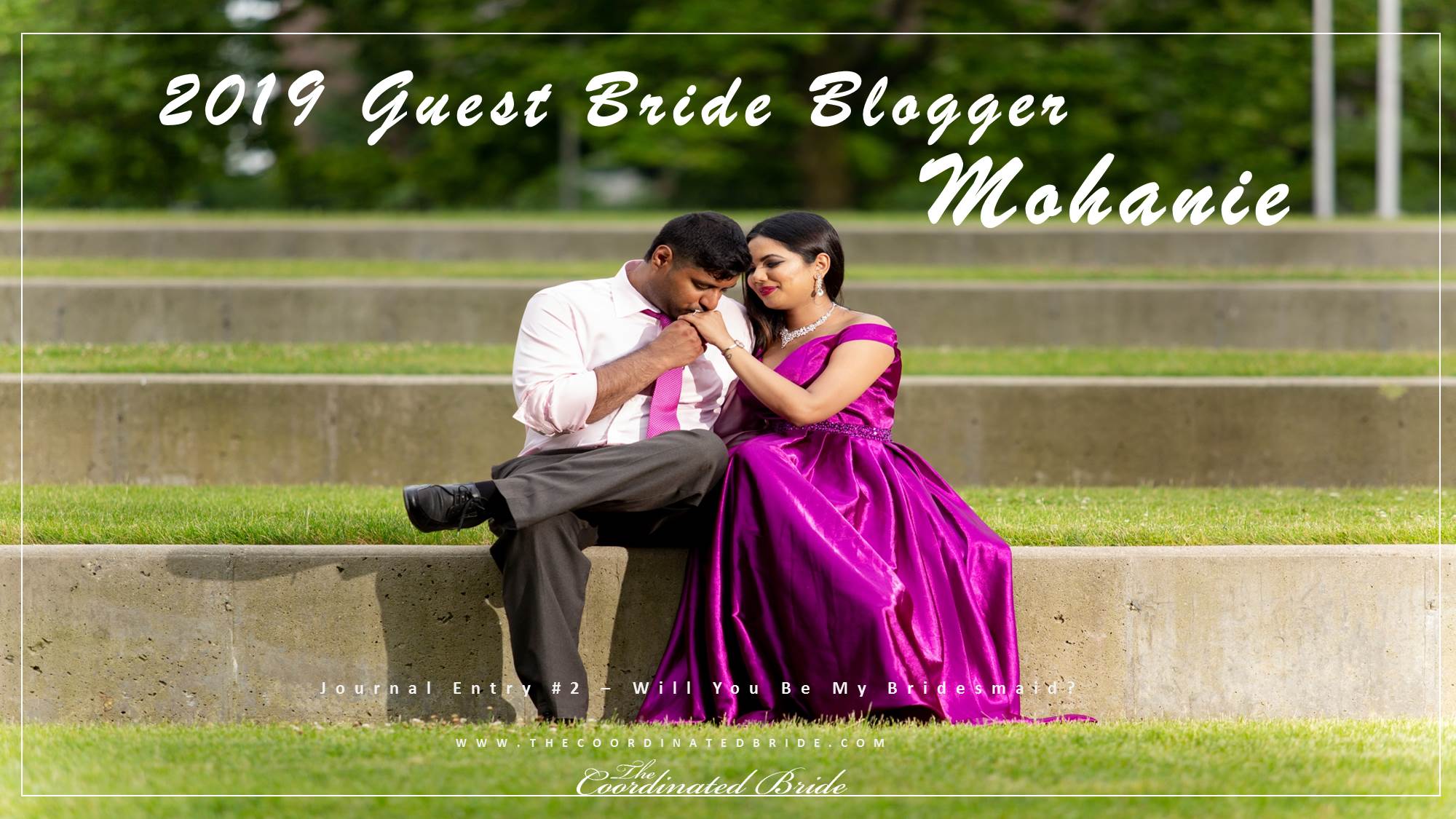 Guest Bride Blogger Mohanie {JE#2}- Will You Be My Bridesmaid?

Will You Be My Bridesmaid?

Bridesmaids proposals- oh boy where do we begin… We all got our ring so now it is our turn to propose to our bridesmaids. I personally could not have gotten through all my years of dating my fiance without help from my bridesmaids. They were the ones that listened to me rant and rave about him. They were also the ones that were there to listen to me gush about him.  And you know what- they were the ones to hear me talk about the wedding process. They kept me from going full on bridezilla mode many a time.  Bottom line, my bridesmaids are like my lifeline to sanity and your bridesmaids might be the same for you too.

Each of my bridesmaids walked into my life at a different point but are all important to me. All my bridesmaids knew they would be my bridesmaid as soon as I got engaged but their actual proposal box came much later. When I say later, I mean like 3 months before the wedding kind of late. I unfortunately procrastinated on creating their proposal box. They all knew they existed and I had everything I needed to put them together but I just did not make it a priority. That was a big mistake on my part so brides learn from me and get them done ASAP!.

The main reason my proposal boxes took so much time was because I wanted to customize the box based on the individual. Every girl had the same box and similar content. Each box had the sari they will be wearing for the religious ceremony, a bath bomb and a mini bottle of their favorite alcohol. The box also included a lip gloss and nail polish I thought would look good on them.

Each girl also received a homemade scratch off card that asked them to be my bridesmaid. This was the first really unique item in the boxes that were a reflection of them. For example, one bridesmaid likes the cloister in Central Park, another the Washington Square Monument, another Tweety etc etc. I used some good ole fashion card stock paper and some gray paint to create these. They were very easy and quick to make. Just google DIY scratch cards and tons of inspiration will pop up.

All of these items were created to be unique.  But what stood out the most in each box was the picture I made each of them.  Using my artsy side, I copied a picture of myself with each girl onto a canvas. The stand for the pictures are also a different color based on each girl’s favorite color. They were surprisingly easy to do but a little time consuming.   The finished product took 2 days.   I learned that there is no way to rush the process and just take your time unless you want to have to redo the entire thing.   I wanted to make each girl feel special and not like they have a generic bridesmaid box.

While we’re on the subject of bridesmaids, let’s talk Maid of Honor proposal.  She is your main chic, your bachelorette and bridal shower planner, your second in command and your right hand woman.  She deserves to stand out more than the other bridesmaids.  If you have more than one Maid of Honor, make them all stand out.  My Maid of Honor is my younger sister.  She has been my partner in crime since before she was old enough to turn over or crawl.    For her proposal box, I created two scratch off cards.  We grew up following a British band called The Wanted and she loves pandas- so that was what I put on her card.  I also went an extra step and bought her a Maid of Honor tiara. I’m not saying you should go all out for your Maid of Honor  but let her know she plays an important role in this whole process and make her feel extra special.

My next challenge after creating the boxes were getting them mailed out to the appropriate places. My bridesmaids live in New York, New Jersey, Tennessee, Michigan and Kentucky.   Living in Michigan myself and creating these boxes in New York was a challenge because I could not work on them as I would have liked. So brides, this is where time management skills will really come into play.   I failed miserably but I am here to share my experience so that you do not.  If anyone is interested in how I created the canvas pictures let me know and I will post the link.