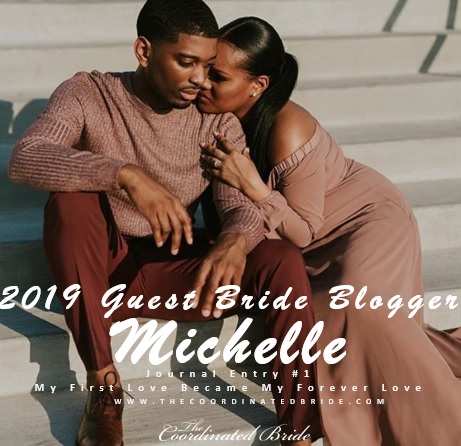 Hey readers! My name is Michelle Jones, after August 10, 2019, you can call me Mrs. Michelle Harley. I will be marrying my MIDDLE school (yes I said middle school) sweetheart Justus Harley in Upper Marlboro, Maryland.

Justus and I met in 2003, we had an eighth grade class together where we literally passed the”Will you be my girlfriend/boyfriend? Check yes or no box” notes (there are break up letters too).On top of having a class together, Justus was on the basketball team and of course, I was a cheerleader, thinking we were the perfect couple. Fast forward 15 years later, we are engaged! Being teenagers, we only lasted halfway through our freshman year of high school. I must admit, it was a hard break up for me; Justus has always been my first love. We didn’t speak much afterwards until the last day of school our senior year (petty me). Fast forward to 2010 my cousin, who was dating one of Justus’ close friends, asked both us to be the Godparents of her first child. Just like that, he was back in my life but this time only in the friend zone. We shared an innocent friendship, that was until I had a messy break up in 2011. Justus was a breath of fresh air. He listened, he was genuine, kind, and the best part of it all is I already knew him. Things got serious between Justus and I as we spent more time together and we decided to make it official (again) in May of 2012. Six years later, we’ve experienced so much with each other. From college graduations, career changes, closing on our first home and becoming parents to our one year old son, Mason and two year old puppy Zoe. Therefore, my first love became my forever love.

It was our son’s first birthday party, February 2018. We were running late (per usual for us), but Justus was taking his time. On the way to the birthday party I thought it was weird Justus kept checking his phone. In my mind I was concerned about the party and setting up for the guest so I brushed it off. The party had a great turn out and it was time to sing Happy Birthday to Mason. As soon as we finished, Justus handed Mason off to my niece and began to thank everyone for coming to the party. He went into a speech thanking our village for helping us survive the first year of having a child. Immediately I thought something was up because Justus isn’t the type to talk to crowds. At the end of the speech, he gave me props for being a strong woman by his side and finally asked If i would marry him. The guests at the birthday party went crazy. My response was “Duhhh” and we ended with a kiss. How did Happy Birthday turn into a wedding proposal! I always dreamed of the fairytale proposal and I got the perfect one. After six years, I couldn’t have asked for anything else. Yes a tear dropped, but it wasn’t the actual proposal. What made me cry was the appreciation Justus was describing during his speech and to end it with a proposal. Goodness. Apparently my family already knew as he had told them in December. I was shocked at how they were able to keep a secret being as though my sister and I talk almost everyday.

As of now, we’ve been engaged for seven months and ironically I’m seven months pregnant.That gives me even more time to sit at home and plan a wedding. Being in four weddings in the past, as a hostess and bridesmaid, I feel like I can pull this off on my own. I do have my Godsister on the sideline helping me to think things through. When we first got engaged, we KEPT getting the question “have you picked a date.” It made me feel like I needed to start planning right away. I started looking day by day for wedding venues online. I was stressing myself out and Justus had to tell me to chill. It had only been a month and we had already visited two venues. He suggested I slow down and I did. I then began to read blogs that suggest newly engaged couples to ENJOY your engagement and not to rush into planning, so I vowed to do that. I then shifted the focus to engagement photos. Justus and I were already going to New Orleans for his birthday in June, so I thought why not take pictures there too. I just love that city, the colors, the culture, and the food. I thought of it being an amazing memory to have professional pictures from there. So I did an Instagram hunt for a photographer who was awesome.

We decided on Calvin Gavion and a flawless make up artist Dee, the owner of Faces of Virtue Makeup Studio. Justus was set, all he needed was a haircut from home before the flight. As you can see the pictures came out great! We had an engagement cookout as well over the summer called “I Do BBQ.” We usually throw one turn up event during the summer so we thought this year we could celebrate our engagement. We put pictures from the last six years of our relationship throughout the house. Our guests loved it and asked questions about where each picture took place. Besides the wet monsoon that was going on outside, we were able to celebrate with our family and friends indoors.

As far as planning the actual wedding, we decided to go with The Lake Presidential Golf Course in Upper Marlboro, Maryland. We set the date for August 10th, 2019. We knew we didn’t want to rush into the wedding before the baby so we went with 2019. August 10th has sentimental value to me as it is my deceased mother’s birthday. With it falling on a Saturday, I thought it would be an honor to get married on her birthday. Coming up next were planning to do our bridal party proposals. Can’t wait to share how thatgoes with you!!