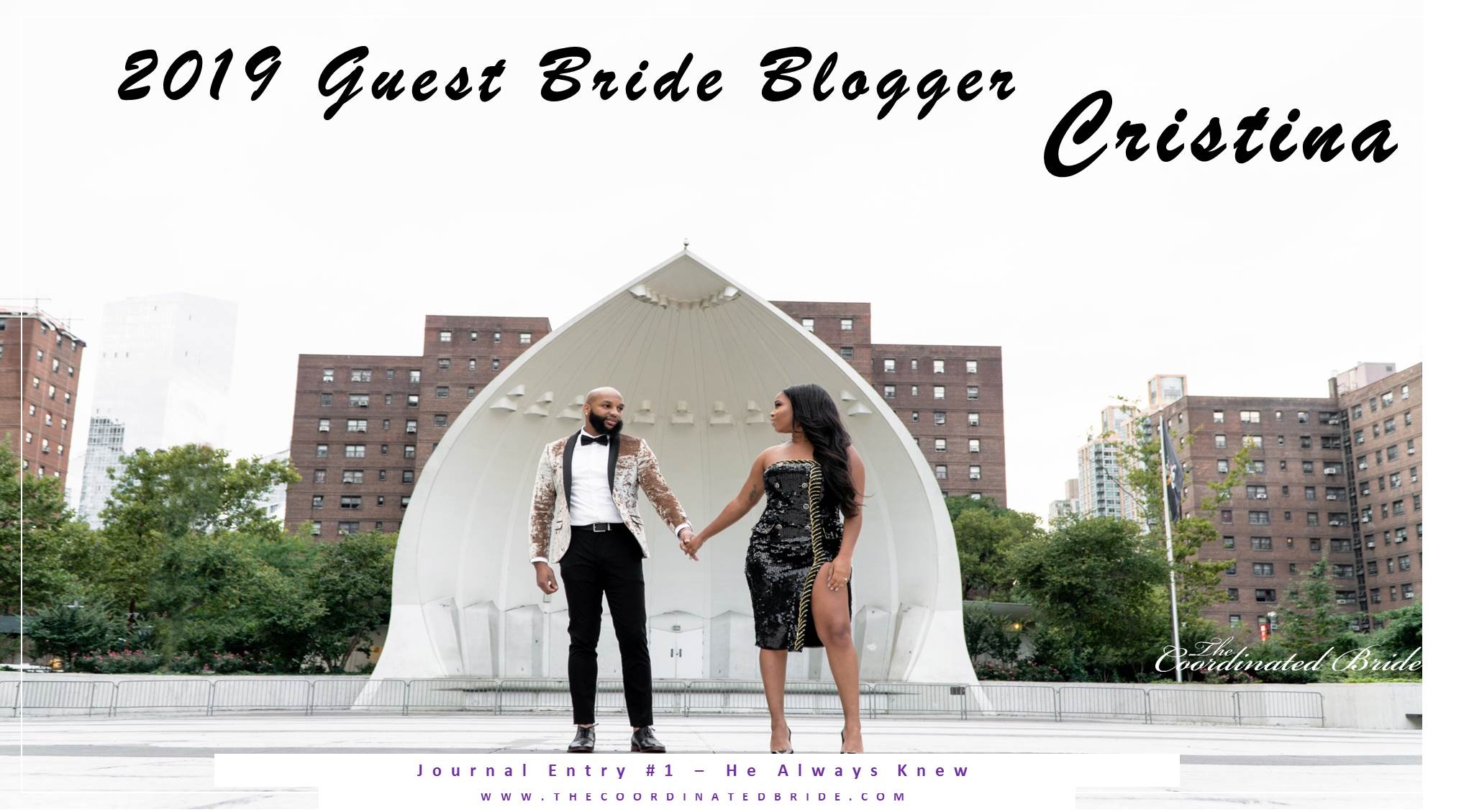 Hello Coordinated Bride family.   My name is Cristina Cowan and I am ecstatic to marry my future hubby Andrew this Summer in New York.  Here’s a glimpse into our story…

Andrew and I officially met in person Memorial weekend, May 2011 in Columbia, SC following months of him trying to pursue me via Facebook. He first saw a picture of me in a collage on one of my best friend’s wall. Andrew and my friend Shari were attending the same college down south; she and I attended elementary and high school together in Elmsford, NY. They claim to this day that when he first saw my picture he said, “I want her”. Retelling the story years later, it doesn’t even sound real but I guess it was love at first sight! Well for him at least, lol. It took a while of pursuing before I fell head over heels for him!

While on vacation with friends in May 2011, we stopped in South Carolina where I was able to “randomly” meet Andrew in person for the first time. My friend later revealed to me that she told Andrew we would be in town. Our initial encounter was brief however it was enough for him to catch my attention after months of him attempting to connect with me through Facebook messages.After this encounter, Andrew and I began to chat here and there through text messaging. He was always complimenting me and saying that we were going to be together, however I honestly wasn’t feeding into it much due to the distance between us. I was living in White Plains, NY and he was living in South Carolina after graduating from college, though he is a New York native.

Months later in October, Andrew held his annual birthday party in NYC which I attended with a friend of mine. From here I became even more interested in Andrew after sharing a kiss in the club, which was unusual for me because I had never been much of a kissing kind of person. When he returned to South Carolina, we began speaking every day. He even switched to team iPhone so that we could FaceTime. Our bond began to grow stronger and stronger, and we began taking turns traveling back and forth every other month so that we could see each other.

Over the years, we encountered some mishaps. I would say it just wasn’t the perfect timing when I look back on it now, however despite where life took us we always remained in contact with one another,offering advice, encouragement and support to one another throughout the years. We drifted apart for some time between 2015 until early 2017 due to us not being on the same page with our expectations and moving forward. Still we always had strong feelings for one another that was undeniable whenever we were in one another’s presence.

Towards the end of 2016, Andrew began to contact me persistently saying that he couldn’t imagine delaying us being together any longer and that he feared I would end up with the wrong guy, i.e. married to someone who wasn’t him. Initially I was a bit apprehensive because I couldn’t stop thinking “why now”? I decided to take the chance and believe in the timing of everything and agreed to becoming an official couple in April 2017. Due to the strong friendship that we had built over the years, everything came naturally to us in a relationship. We began to visit one another more frequently back and forth between SC and NY again, until Andrew made the decision to move back to New York to be with me, his family, and to further pursue his career.

Over the next few months following Andrew’s move, he and I became inseparable (as seen on Instagram, ha ha ha). On May 23rd, 2018, after asking for blessings from my father (who already referred to Andrew as his son), and Andrew’s son Sidney, he proposed to me at my graduation dinner, celebrating me just receiving my Masters of Social Work from Fordham University, in front of both our family and friends.  Of course I said “Yes”!

Andrew had the waiters bring out the cake box with a sparkler in it, and the hilarious part is when I looked down in the box I was so confused not to see a cake that I said, “I think they brought us someone else’s cake box”. It was honestly the most shocking moment of my life to date. I couldn’t believe this was happening although I honestly felt it coming. I had given several hints of my dream ring but I was so focused on the graduation and my upcoming birthday. However, I knew that we were going to be together forever and it was only a matter of time!

Andrew and I have been in the making for approximately seven years, and are now going to become one in August of 2019 and I seriously cannot wait. We are both in jobs that we love that consist of helping others,him being a Recreational Therapist and myself a School Social Worker.  We will be moving into our new starter home soon. We have been doing so much wedding planning as far as selecting our bridal party, putting together bridesmaids and groomsmen proposals. We’ve hired our photographer/videographer, booked the most amazing venue in Rye, NY, and have selected out colors and theme. We recently did our engagement shoot with our photographer J. McCoy (@j.mmcoyphotography). We had an Engagement Party the last weekend of September, planned by my sister who is also my Maid of Honor,my parents, and Andrew’s aunt. It was the most amazing time ever and has us both even more excited for the wedding!

We are honestly just so blessed, enjoying the wedding planning process and each other, as well as our friends and families who have been sooooo supportive. At this moment there haven’t been any stressors but it is just the beginning. I am excited to go dress shopping, bridesmaids dress shopping, flower shopping, etc.  From speaking to recently married friends as well as others who are currently in the wedding planning process I have heard mixed reviews. I’m bracing myself for the stressful moments that will come, if any, and crossing my fingers that most things will run smoothly! My next step is to probably look into hiring a coordinator or a planner, I think I’m leaning towards coordinator since I already have my vision.

I can’t wait to share the journey with you!