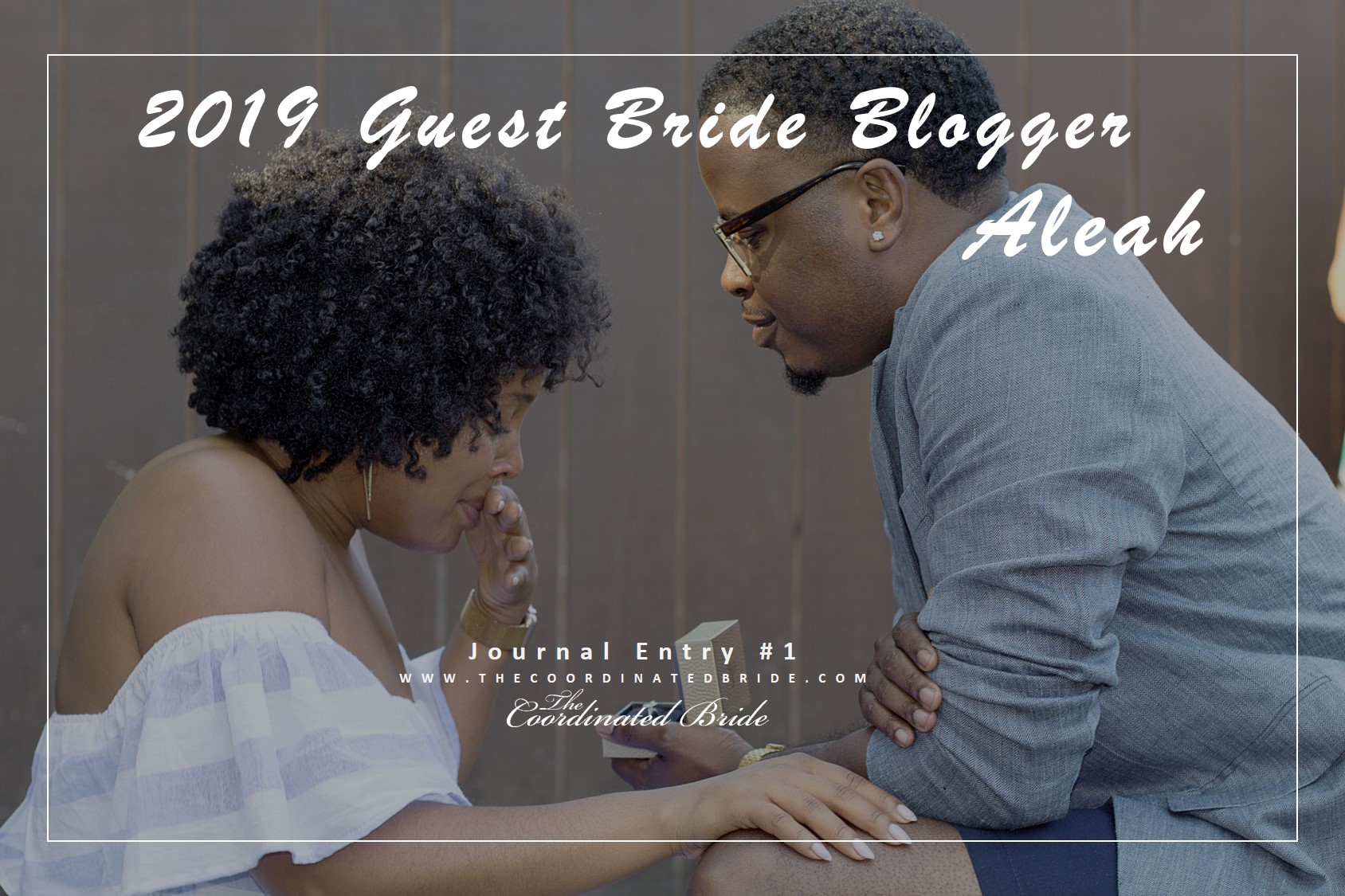 We are elated to introduce you to Aleah and her husband to be, Terrence aka #ForeverJordan. The pair are all set to tie the knot on November 10, 2019 and Aleah is our final 2019 Guest Bride Blogger/Certified Coordinated to get married this year. Sit back and read her first journal entry and keep in mind that Aleah penned this back in September of 2018. Enjoy!

I am a 30-year-old bride-to-be, who has been dreaming about being married for 45 years! Ironically, I could never picture my wedding with an actual groom until a month or so after meeting Terrence. I was fresh off of a heartbreak and done with dating for a while, and he had just ended the longest relationship of his adult life. We went into the relationship planning to just be friends and 5.5 years, long-distance, new jobs, cohabitation, and a Ph.D. later, I FINALLY got my ring!!

Once upon a time…

I was out with some girlfriends in Minneapolis and the line to get in the club was SUPER long. I saw a few cute guys near the front so I crawled under the rope and was like, “Hey can we cut?” They were all like “HELL YEAH!” His friends were really chatty but he didn’t say much. Once we got inside he said, “Yo, I know the bartender, let me get you a drink” and returned with an Amaretto Sour of all things (I was so unimpressed). The night got crazy so we left without exchanging numbers, but a few days later I get a call from him saying he heard some new Sorors were in town and wanted to make sure we were settling in okay. He totally acted like he didn’t know me…little did I know he had asked someone else for my number but didn’t want to seem like a creeper, lol. That week we talked on the phone all night, every night, like teenagers. One night I was hungry and he was bored so we decided to go to a diner. Keep in mind I was not interested in dating…I showed up in sweats, a ponytail and zero effort to impress him. Fast-forward to a month of hanging out and one day it hit me, “I think I like him!” From that day on I was super nervous and weird around him until he finally confessed that he was into me but didn’t want to start anything due to him leaving to start his Ph.D. in the Fall. We couldn’t deny the attraction no matter how hard we tried and as he drove off with a car full of stuff to move to Atlanta for school, I got a text that read: 1-4-3. I called him and said, “I knew you loved me, why didn’t you just say it?” 3 months later I moved to Atlanta and the rest is history!

Let me quickly share my headspace the week of the proposal. I had been a bridesmaid 10 times and literally, EVERYONE around me was getting engaged. I had just flown to NY the week before for my linesister’s engagement. I also knew my cousin and friend were both getting engaged in July. Needless to say, I had a permanent attitude for the month of June. Top it with the fact that he had been Doctor Jordan (ie. Done with school) for nearly 6 months, I loved him but I was FED UP!!

I was home in Indiana visiting family and my mom put together a BBQ so I could see everyone. I had been hoping every day for the last year that it was “the day”, and this day was no different. I obsessed over what to wear, spent 2 hours on my twist out hairstyle and added an extra touch of highlighter. When he text me from Atlanta saying he was going to Urgent Care, I sadly thought it wasn’t happening. All day he had been texting updates and telling me about The Wire, which he was re-watching for the 100th time, so I really had no hope and was kind of down about it. Little did I know, he was really around the corner at my sister’s house, not in Atlanta or watching The Wire. A few hours into the BBQ on the hottest day ever, my cousin put $50 on the line to get me out of the house to play corn hole. As we are playing everyone starts taking out their phones to record “game point.” I was like it’s not that deep…oh wait something is happening! My 3-year-old nephew Carson runs out of the house with a ring box and goes “Tee Tee this is for you!” I open it and the box was EMPTY! I was now bent over asking “Carson what is going on? This is not funny” and he is shrugging and smiling while everyone else is laughing and recording. I then look up and see Terrence walking out of my parents’ house. I literally throw the box and turn my back as tears are streaming down my face. He grabs my hand and gets down on one knee and I completely left my body! It was really loud so I got down with him and he was looking like “What are you doing?” After 5.5 years, I did not want to miss a word! Once he said all of the sweet things, faces started to appear in the growing crowd and I saw he flew in my cousin and his best friend from Atlanta, his family had driven up from Milwaukee and of course, my entire family was there. I was so shocked my mom had to yell, “Let him put the ring on!”  It was absolutely perfect!

I am the planner in every group and my Fiancé is so spoiled by my research abilities, that this event was no different. He asked me to send him “the spreadsheet” and then we could talk. I had my spreadsheet of locations, pros and cons, prices and commentary, but I sat on it for a few weeks to pretend like I didn’t already have everything planned. We have known for the last few years that we wanted to do a destination wedding to cut costs (it’s shaping up to be just as expensive as a traditional wedding lol) so all we had to do was select the location. 1,000 podcasts/videos/blogs and 2 travel agents later, we have landed on Dreams Playa Mujeres in Mexico. The bridal party proposals have been sent, my mom and I just got back from our site visit and Save-the-Dates will be mailed this week! I am in 2 weddings in 2019 on top of mine so I am trying to get as much done in advance, as possible.

In the few months that we have been engaged, Terrence is shaping up to be a bit of a groomzilla lol, but we are so very excited to celebrate our love with friends and family in Mexico next year!

All images captured by Joe McCool.