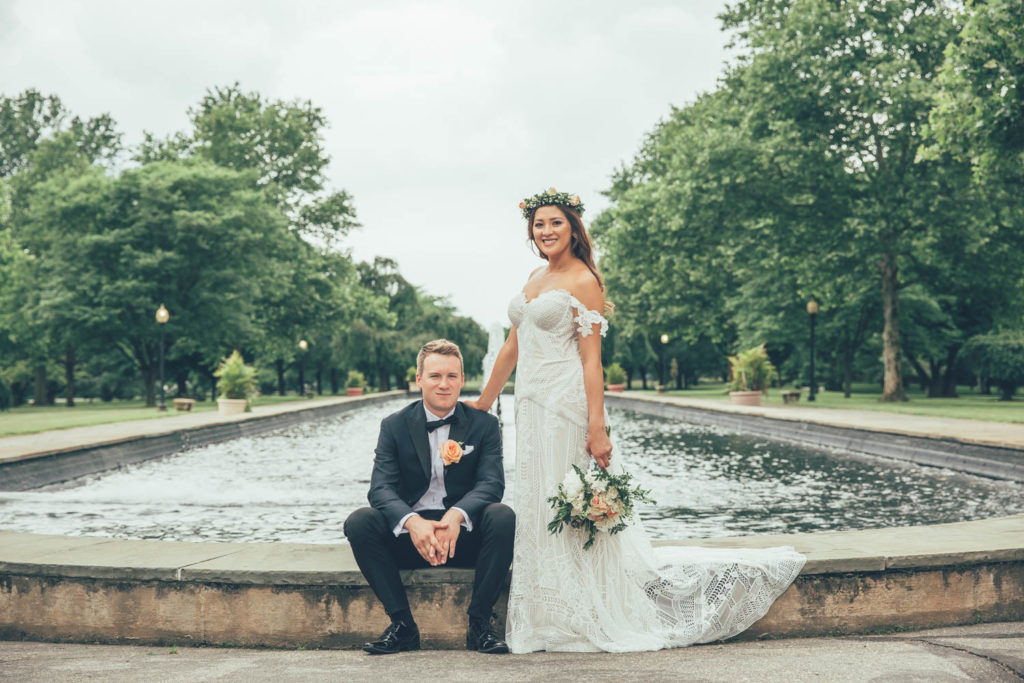 Chandara and Garth had a serene Philadelphia wedding at the Fairmount Park Horticulture Center.    The couple met during their college years while they both happen to be in Mexico for Spring break.

From The Coordinated Bride, Chandara

I went down to Mexico on spring break with my sorority sisters (5 of us girls total).  We met these three fun guys from Philly.  They had weird accents and cool dance moves. They were doing this dance called the Cat Daddy. (Chris Brown song, that was popular at the time).  We had never heard of the song or seen anyone do the dance!  These Philly guys were cool! 😉 I met Garth the first night at our resort and it was their first night down there also.  We hung out with the three guys from Philly the entire time while we were in Mexico. We thought it would be fun to take these Philly guys as dates to our sorority formal, with their cool dance moves…

Garth was my date to the formal, so when he was in Minneapolis, we went on our first date to a steakhouse.  It was a fancy steakhouse and Garth asked for A1 steak sauce (I was mortified!)

Garth proposed in our new home with flowers and a poem.  We moved into our new house in September and Garth proposed shortly after on December 30th.  We celebrated our engagement that night with dinner.  The next day was New Year’s Eve, and we threw a huge party at our house and was able to celebrate our engagement with friends and family, and “ring” in the new year!

The Bride, Chandara is the owner of a local Philadelphia company called RadiantSoap.  At the time, she was an Accountant and felt incredibly depressed and stagnant in her career.  She started this business as a way to express herself creatively and see the fruits of her labor.  From dreaming up different soap combinations, to planning out her product photo-shoots, Chandara loves being able to have her own brand that allows her to express what inspires her in the moment.

Special thanks to Chandara and Garth’s wedding officiant, MARRIEDby REV ROXY for submitting their story and the beautiful images by Dave Austria.