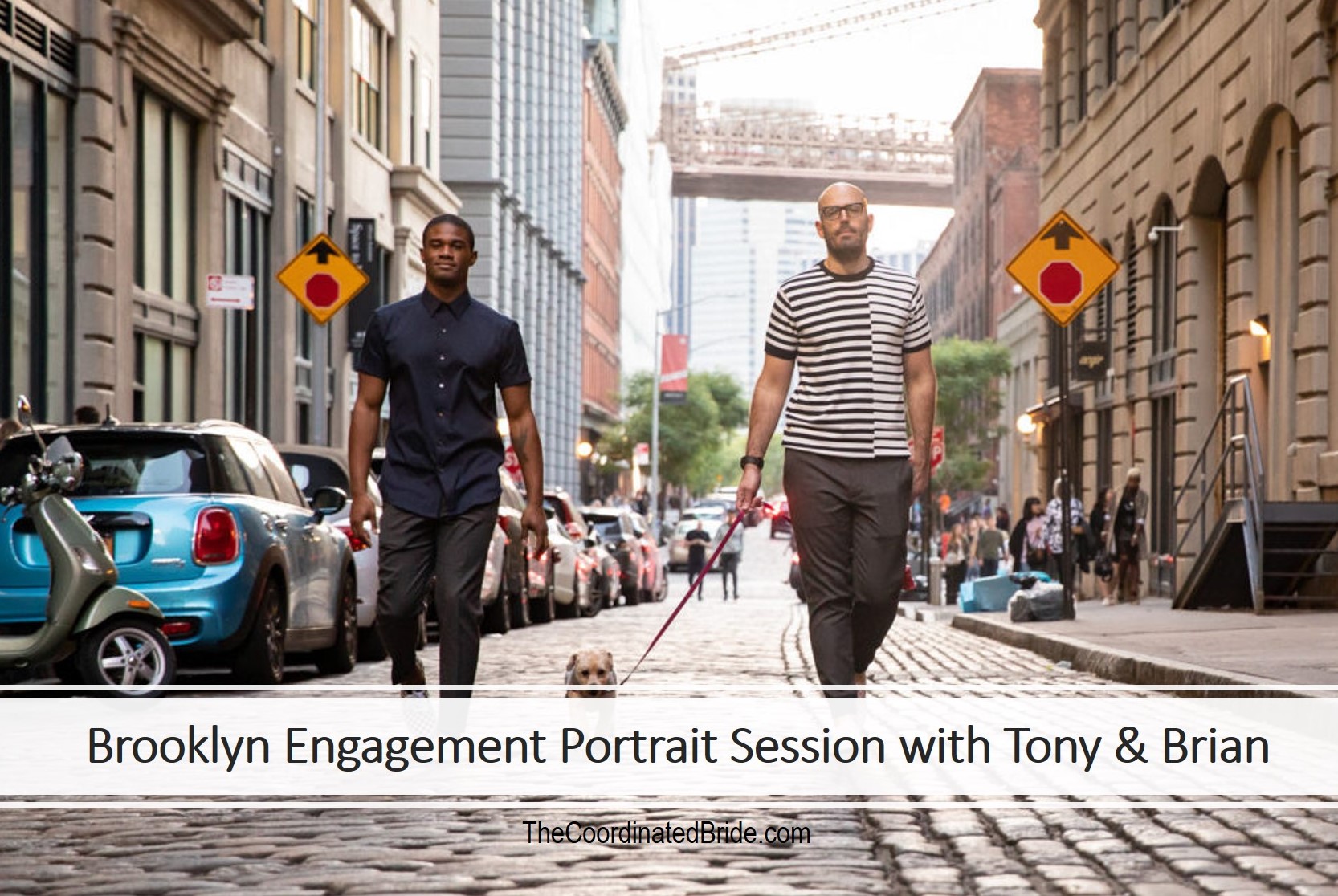 Tony and Brian first met in New York City back in 2011 through a mutual friend.  At the time, Brian was visiting from North Carolina.   Five years later the two reconnected over Instagram. A few weeks after later, Brian visited Tony in the city where they had their first date, dinner at The Mermaid Oyster Bar followed by the Broadway show, An American in Paris. The two dated long distance until Brian relocated to New York City in November 2017.

Tony proposed to Brian in their home on the eve of Brian’s 30th birthday in May 2018.  To get Brian out of the apartment, Tony told Brian he was stuck at work and that Brian had to drop Winnie (their dog) off at a friend’s to watch her while they were in Barcelona.  When Brian left the apartment, Tony already had picked up Brian’s favorite foods from around the neighborhood, and decorated the apartment with candles and strung lights, and when Brian returned from dropping off Winnie, Tony had a playlist ready to go and was on one knee.

Tony and Brian intended to fly to Barcelona, Spain on the next day to celebrate but unfortunately ran into an unexpected passport issue upon arrival at the airport.  Though there were tears and heartbreak in the moment, they quickly planned a diverted trip to Miami, FL and it now makes for a funny — yet painful — story.

For Brian’s engagement ring, Tony surprised Brian with the Cartier rose gold love ring, with diamonds. For their bands: Brian stacked his Cartier love ring with a Cartier platinum band, with diamonds around the entire band; and Tony has a classic Van Cleef & Arpels platinum band that compliments Brian’s rings beautifully.

Tony and Brian were beyond excited to celebrate their marriage with family and friends at The Hoxton in Brooklyn, NY on October 5, 2019. The two hosted their ceremony and a cocktail hour on The Hoxton’s Summerly Rooftop, followed by their reception and party in The Hoxton’s Apartment. It was the perfect bash and blast that the two always envisioned — celebrating with about 125 guests. They were grateful to have diverse and talented females contribute to their special day: officiant, The Honorable Deborah A. Batts, United States District Court Judge in the Southern District of New York; photographer, Laurie Rhodes; wedding coordinator, Brittany Ward of Modern Rebel NYC; disc jockey, Khloe G (Milkyshake); singer, Tamara Jade; and guitarist, Alex Nolan.

Today, the happily married couple live in DUMBO, Brooklyn with their dog, Winnie.  They both adore her and spend a lot of time taking long walks with her on the Brooklyn waterfront.  Tony and Brian also love to travel as much as possible!  For their honeymoon, they went to Bali and Singapore for two weeks.  Also, to celebrate their first Valentine’s Day together as a married couple, Tony surprised Brian with a trip to Paris.  In addition to travelling internationally, Tony and Brian frequently visit Provincetown and Palm Springs.  Tony and Brian also love exercise — they recognize that it is key not only to their physical healthy, but also to their emotional and mental health.