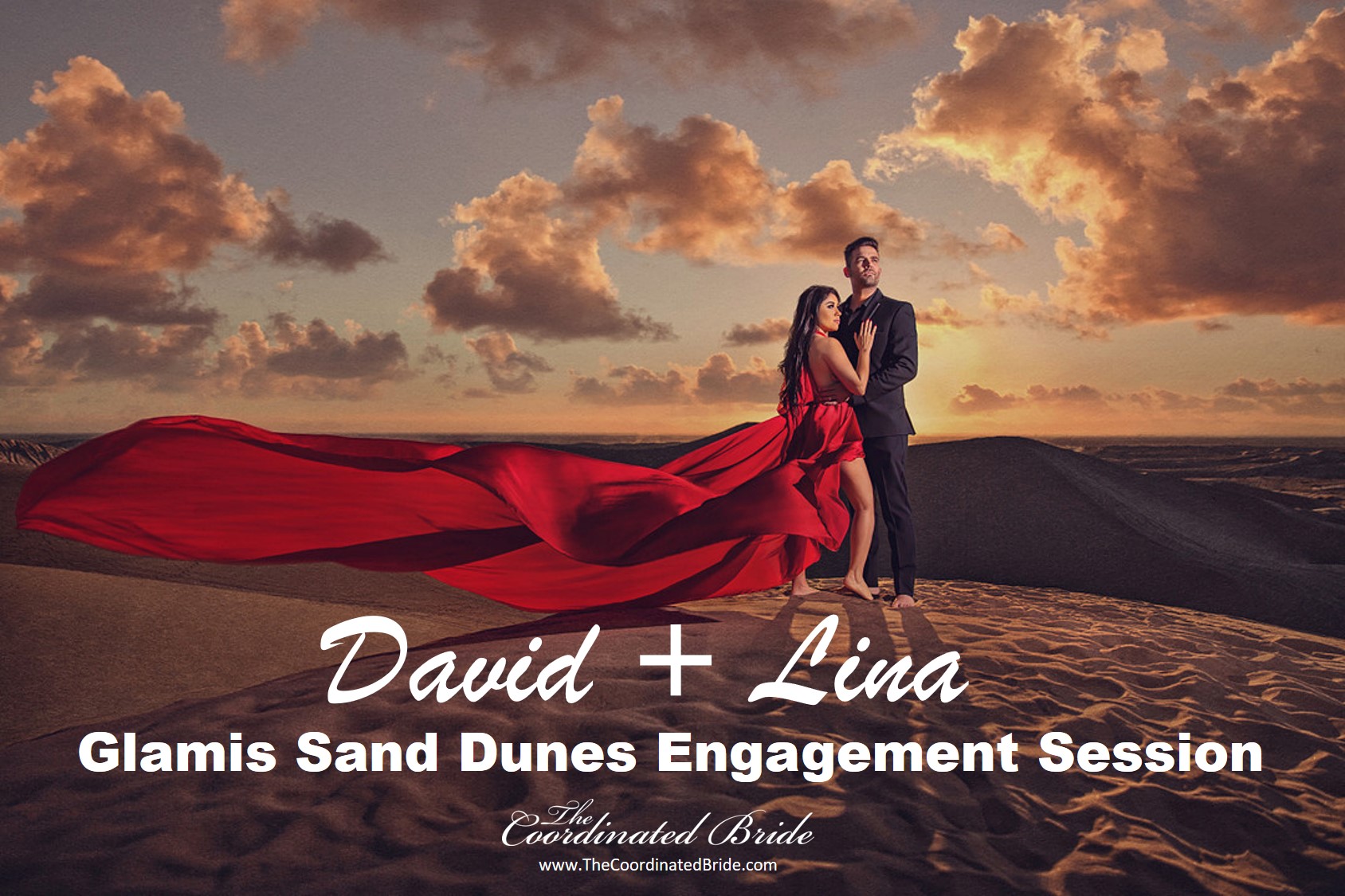 David, a California native and Lina, a Colombian native found real love back in 2018 in downtown, Los Angeles. They recently had their engagement session at the stunning Glamis Sand Dunes with photographer David Martin Jr Photography! Keep reading for a beautiful love story!

We met on August 11, 2018 in Downtown, Los Angeles at LA Live. I was with my sister and friends heading to a concert that night. David was passing by having dinner at one of the local restaurants when he saw me for the first time. It wasn’t until 3 hours later, after the concert ended when we crossed paths again in a nearby cocktail lounge. As the night went on, someone walked over with a cocktail and said this is from “my friend over there”. Given that I couldn’t see who it was because it was so packed with people and I was a little uneasy of the circumstance, I did not accept the drink, LOL. It didn’t take too much longer until my sister came to me and said “sis you need to come and see this guy who’s asking for you, I think you are going to like him”.   I didn’t really want to go but my sister kept insisting so, UGH I went 🙂 The first thing he said was that he was shocked because he saw me outside passing by and he thought he would never run into me again (I had no idea at the time that he saw me outside 3 hours prior). As it turns out, the guy that my sister took me over to meet that night just so happened to be my future husband, David. To make a long history short, we started chatting that night and we’ve been together ever since. Who would have thought? 🙂

It was on our 2 year anniversary weekend (August 11th, 2020) that we snuck off to a beautiful hidden gem called Guadalupe Valley just about an hour or so passed Tijuana in Mexico. Guadalupe Valley is a breathe-taking wine country that is full of romance and unforgettable energy. We stayed at a hotel resort called Encuentro which overlooks Guadalupe Valley. This magical place is one of the most unique hotels that we have ever stayed at and maybe even our favorite of all time. I can’t even explain it you just have to go there. David took me to a restaurant called Fauna on the evening of August 10th. Fauna is a farm to table restaurant with the most delicious food and amazing views of Guadalupe Valley. I told David later that Fauna was the best restaurant that I’ve ever ate at which I can’t believe I even said that because we have amazing places to eat in Colombia. Thats how fresh and good and all of the above that Fauna was. I told David “if you ever propose to me I want it to be at a place like this” (I had no idea at the time that was going to propose on this trip).Lina tells me that and I’m like holy smokes in my mind. The thing is I had a different plan and didn’t have the ring on me but in my mind I’m like crap I should have brought it here! This was our first night in Guadalupe Valley and I wanted to propose tonight that way we could enjoy the rest of the trip engaged. I was thinking to myself maybe we should come back tomorrow evening and I’ll do it then but then I’m like no no …I didn’t want to wait so even though she said that I stuck to my guns and went with my original game plan. Back at our room, which was way up in the mountains in our own private space (Its like a mini house). We had a little outside patio that overlooks the mountains with a fireplace. We came back from Fauna and the gentlemen at the resort got our fire place going and had wine set up for us outside. It was a gorgeous night with a million stars out. Lina went in the room for a moment and came back out to me on one knee, slightly shaking with ring out. The rest is history.I had no clue and was shocked when David proposed. We were going there for our anniversary but I didn’t know that was coming. I said yes!

Lina said what she’s most excited about in the planning of the wedding is getting her vows ready to read to me and picking out and fitting into her wedding dress. What I’m most excited about is also putting together what I’m going to write to her and picking out the food selection for our guests as were choosing our cuisine in an untraditional like manner. We are infusing what we like, foods from different cultures that we eat on a regular and sharing it with our guests which for many of them, will be the first time in trying it.

Congratulations to both David and Lina, we wish you the best in both love and life!