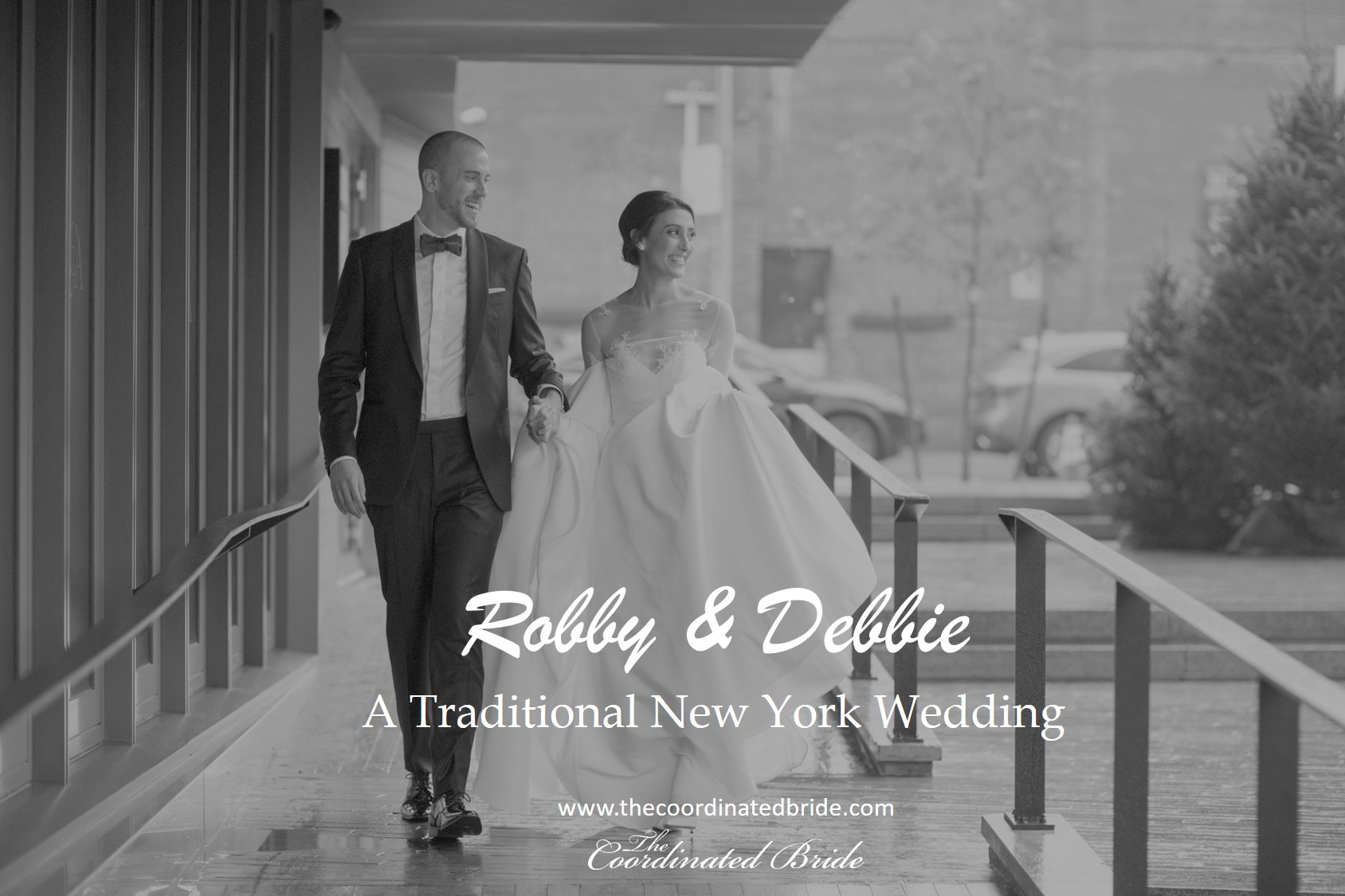 Debbie, the bride, is a wedding coordinator at Vision Event Co.! She first met Robby at Camp Ramah in the Berkshires in the summer of 2005 (despite having gone to camp together for three years prior) in an attempt to set him up with one of her friends.  Fast forward 13 years later and the couple had a 350 person, traditional Jewish wedding in New York at Knockdown Center.

Choosing a coordinator was a no-brainer since Debbie proudly works for Vision Event Co. Daniela’s (and Colleen’s) attention to detail and problem-solving mindset calmed Debbie’s nerves and took weights off her shoulders in the weeks leading up to the big day.

The wedding planning process had its highs, and of course, its challenges. Nevertheless, Robby and I miss the fun parts –picking out vendors, choosing fun foods to include and reviewing song lists. However, talking about other topics is definitely a welcome change!  I (Debbie) was lucky in that I had experience planning weddings. I work part time for Vision Event Co. as one of their lead wedding planners, but truly nothing quite prepares you for the occasional difficult conversation that arises throughout the planning process. I always joke with brides and grooms that you’re finally equipped to plan a wedding the day after it is over.

Walker Studios (Jason and Rebecca Walker of Walker Studios) were the photographers for Debbie and Robby’s wedding day.   Wedding entertainment was provided by Hank Lane Band/Nocturne, Debbie specifically chose this band after stumbling across a video on Instagram of them playing Paul Simon’s You Can Call Me Al”. The horn section and the energy of the band was contagious.

The day of our wedding started much earlier for me than it did for Robby. Friends of mine started to arrive at 7am to begin getting their hair done (Face Time Beauty/Glamsquad) and make up (Hencey’s for Beauty). It didn’t take long before my suite turned into a hair and makeup factory! Nevertheless, it was a leisurely morning and exactly how I wanted to start my day. Robby and I decided we didn’t want to do too many toasts during the actual reception so my sister (Maid of Honor) gave a champagne toast in the morning to kick off the day. There was not a dry eye in the suite and it was such a touching way to begin what would inevitably be an extremely emotional and exciting day!

Once it was time to get into my dress I could feel things getting real! After my mom and sister helped me into my dress I did a quick first look with my Dad (we managed to keep my dress a secret from him up until that point), gave my Mom and Dad letters I wrote them thanking them for their love and support, a first look with my friends in my suite and read a card Robby wrote me.

Robby’s day started much later than mine. I think he woke up closer to 9am and had breakfast with his brothers followed by a nice hot shave. We even convinced my Dad to get one, which if you know my dad, would be shocking. A bit later on his Dad and step mom arrived at the William Vale from their house in NJ as did the photographers. Robby put on his tux, tied his bow tie (successfully, I may add) and read the card I wrote him. There is a great photo of him laughing while reading it. It is one of my favorites!

Robby and I met shortly after getting into our dress/tux respectively on the ground floor of the William Vale. I walked down this long staircase and met Robby at the bottom of the stairs. His face was priceless!   I don’t think I can narrow it down to just one favorite moment – but I will try. One of my absolute favorites was our first look. I know that is probably cliché but it is true! In accordance with Jewish traditions, Robby and I didn’t see each other (or really talk) for a week leading up to the wedding. When I headed to our first look I felt overjoyed with excitement, which I’m sure is normal but I think I had an extra layer because not only was it our wedding day, I was so excited to get our life back to normal, to hear how his week was, how his day was going and truly to catch up!

After the first look the day sped up quickly! Jason and Rebecca moved us around the hotel and the next thing I knew, Colleen was helping us into our SUV (which we pre-ordered using MyLimo) and we were on our way to the venue! Our day was overcast and a bit misty in the morning which didn’t make for the most effortless photo session, but Jason and Rebecca managed to make magic happen anyway. The photos of Robby and Me with the clear umbrella are some of my favorites!

Walking into the venue was one of my favorite moments of the day…and most definitely my least “lady like”. I’m pretty sure when I walked into the space I used profanity that I don’t care to admit. I was overwhelmed. The space looked AMAZING! Our Caterer (Pomp Catering) utilized wood and florals to bring the cocktail hour stations to life, the rentals (Broadway Party Rentals) that my Mom and I obsessed over for hours looked fabulous, and our Chuppah was everything my floral dreams were made of. Rosehip took an empty, industrial, cavernous space and transformed it into an intimate, romantic wedding ceremony of my dreams.

We had 350 guests at our wedding but wanted desperately for our ceremony to feel intimate. To accomplish this we held our ceremony in the round, with our marriage canopy (Chuppah) in the center. This was one of the things my mom felt strongly about early on and she was right! It added a level of connectedness and intimacy to an otherwise large crowd. Robby’s stepmother, Nancy likes to joke that you could hear a pin drop!

The schedule of events included the cocktail hour first, followed by the ceremony.  The cocktail hour is divided into a tisch and a bedeken. During the Tisch, Robby and his male friends and family gathered for food, drinks, a few short speeches, lots of toasts and an all-around joyful celebration of the groom.  While the Tisch is going on, Debbie greeted guests at the cocktail hour in another part of the venue.

Robby: My favorite moment from our wedding was the end of – and few minutes directly after – our ceremony.  First of all, Debbie and I hugged and kissed for the first time as a married couple which was just an indescribable feeling and one I’ll always remember like it just happened. Then we were danced out of the room with all of our friends and family with music blasting and everyone jumping and singing at the top of their lungs (including me and Debbie), all of this happening before the party even started! In this small window of time the room fills with this perfectly unique combination of love, excitement and pure happiness that is simply impossible to replicate.

We closed the night out with an epic afterparty in the bar attached to the restaurant. DJ Unique (Look him up, he’s amazing) chose incredible songs and really kept the party thriving – especially considering it was 11pm on a Sunday night.

Debbie: Take a moment before beginning to plan to truly bask in being engaged, and once you get started, try as best you can to enjoy the planning process. Surround yourselves with people – friends, family, vendors – who bring you joy throughout!

Robby: Constantly remind yourselves that no matter what happens throughout the planning process, at the end of the day you will be married. Planning a wedding and juggling the endless amount of variables is stressful, but doing it together and reminding yourselves of all the joy that lies ahead makes it much easier to handle. While you can’t (and shouldn’t) expect everything to go perfectly on your wedding day, the day itself will be nothing short of perfection as you get to marry the love of your life and celebrate with everyone who loves you.

Both: Take time to plan your honeymoon. Having something to look forward to after the wedding is key, not to mention how great it is to spend time together after the wedding! Also, take a moment during the party to look out at the crowd. It is so spectacular to see everyone together having a great time celebrating you.