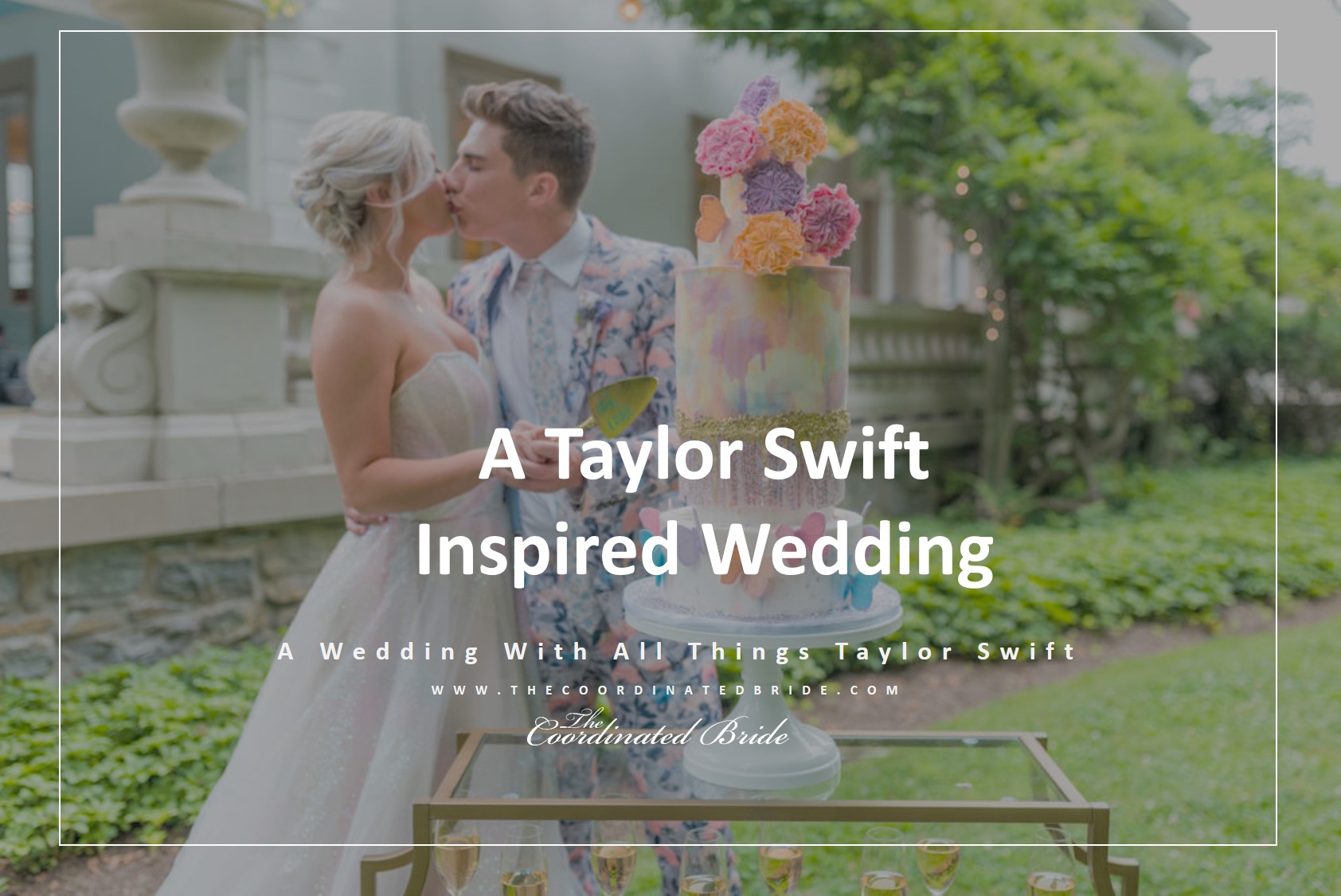 Today’s feature is a special one and probably one of the most creative editorials we’ve ever featured on the blog – definitely magazine worthy. The collaborators behind this shoot thought absolutely outside of the box – I mean wayyyyy out of the box and everything was coordinated beautifully. Taylor Swift premiered the “Me!” video back in April of this year but Photographer, Ashton Kelly had been planning a Taylor Swift Inspired Wedding since May of 2018. I would narrate but Ashton covered all of the bases when submitting this stunningly colorful and vibrant shoot so here’s the play by play of this production – directly from Ashton.

It was a piece of paper in a notebook. A simple list of ideas. One that kept finding its way to the bottom of the pile. It was a scrap sheet of parchment that I would dig out every now and again to add something new.  I was planning a full-on Taylor Swift inspired wedding. On May 22nd last year, I filled an entire page. I took a photo of the report and I emailed it to a creative friend. She responded immediately that I needed to create a mood board and carry this out. While I was excited, it was extremely intimidating and I got overwhelmed. The list of ideas was sat aside, again.

At the end of 2018, I started working with Jess Albins Events on a lot of projects. As we entered 2019, we decided to pick a few shoots we were really passionate about to ensure they were carried out. I took the time to revisit my “Secret Session I Do” notes, and Jess insisted it needed to be at the top of our list. We set a date and started recruiting the squad! With a shooting date of June 9th, we gave ourselves a few months to carry out planning. It was important to us to have a lot of time so we could give our team could curate the best content possible. We were unprepared for what came next.

Jess and I were deep into planning. We were deep diving through social media, watching music videos, listening to albums on loop, and studying live shows for anything we could incorporate. When we weren’t immersed in pop culture through direct search, we were browsing through everything the fandom had to say. It was a level of know-all commitment that even I wasn’t used to. Then, something crazy happened. Taylor Swift emerged with a cryptic countdown. Her Instagram took a colorful turn. She was making tons of appearances in rainbow inspired dresses. New music was on the rise. The best part? It matched EVERYTHING we were planning.

The ME! video provided us with tons of ideas to incorporate. Across the board, we all discussed changes we could make to include this new era. Excitement was at an all-time high behind the scenes.  We took a cue from Taylor and began a mysterious countdown of our own. “6.9” was coming and we wanted everyone to be intrigued.

The day of the shoot was a whirlwind. We were at the venue for over 12 hours. It was the most intense and ambitious shoot I have ever planned. We brought in breakfast and lunch for the team who worked tirelessly all day. While we had a few hiccups, it was truly a blast to create. The weather was amazing, our squad was incredible (and so much fun!), and our models brought everything to life. I’m so elated to be sharing these photos with you today!

I normally do a segment called “FIVE FUN FACTS.” Today, I thought it would be fitting to do thirteen.

6. Right after Kelsey Montague premiered the Taylor Swift butterfly mural, she came to Baltimore to paint one locally. My friend Kate (one of the bridesmaid models!) invited me to a private party to preview it and I got to meet Kelsey. I completely fan-girled and she generously answered all of my questions about Taylor and her mural in Nashville!

7. Every single detail was chosen for a reason. Almost everything in the shoot will relate back to Taylor Swift. We’ve referenced everything from iconic moments to over a third of her discography. How many “Easter Eggs” can you find

8. During our shoot, we saw a real snake! While I’m not a huge fan being so close to slithery snakes, we all took it as a great omen for the shoot. You’ll see a photo of our friend below.

9. Crimson and Clover opted out of using any greenery by including candy colored foliage in pastel pinks and purple.

10. Amy Scripts lettered “his” and “hers” vows which I wrote from taking romantic snippets from every song of the “Fearless” album.

11. The glitter fringe on the wedding cake MOVED in the wind.

12. When ME! premiered, I took a huge leap of faith that the album would be called “LOVER” and commissioned a jacket to be made for the shoot. Daily Disco created the custom piece you’ll see in the photos, which is also conveniently my size. 😉

13. During the shoot, as people observed what we were doing, we were approached with the same question over and over. “Is Taylor Swift coming here?” We had to reply no, but we are hoping our paths cross soon.

People always ask me what I would say to Taylor Swift if given the opportunity. The truth is, that’s one of the hardest questions for me. I know, for one, I’d be emotionally speechless in that moment. Secondly, what could I possibly say to her that could be anywhere as insightful as what she’s spoken to me through her music? Honestly, I just feel like anything I could say would be cliche or self-serving. I just really relate to her, her music, and I aspire to make others feel the way she’s made me feel. I am so inspired by her music.  Can’t you tell? 🙂