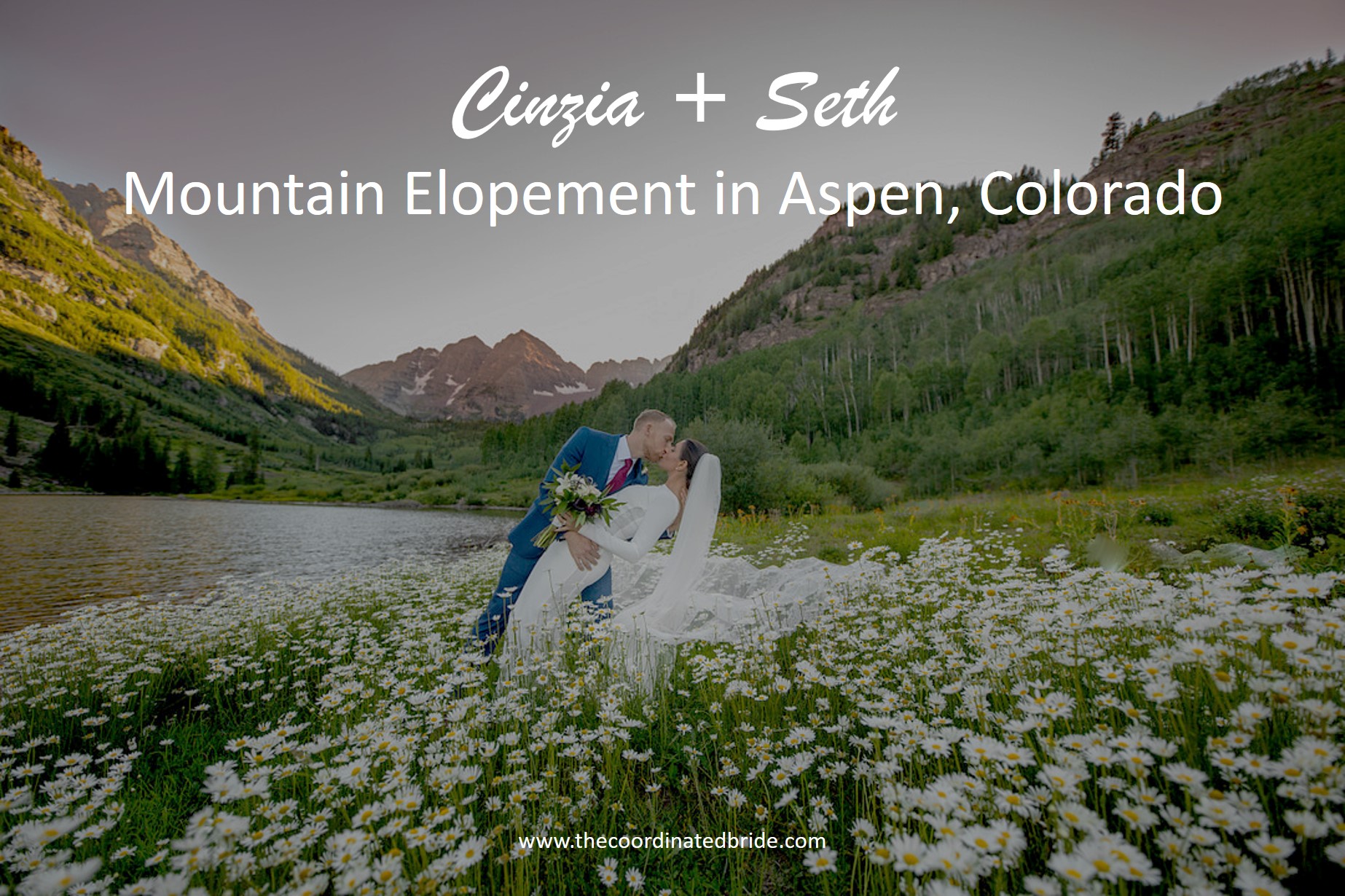 Cinzia & Seth decided to elope atop Aspen Mountain and took some amazing photos at Maroon Bells. They originally planned to wed in California with a church ceremony and Sonoma vineyard reception but decided to elope due to Covid.

Beautiful Cinzia & Seth… an Italian beauty from the east coast and a handsome fella from the west coast… met by chance on a connecting flight in Denver, Colorado. They chatted on the plane, they instantly connected and Cinzia’s number found its way into Seth’s phone. They spent the next months getting to know each other and courting long distance until Seth flew cross country for their first date. Three years later and lots of adventures behind them, Seth asked and she said yes! As they planned their big beautiful Sonoma Wedding day, Cinzia joked about getting married on a mountain top. Then sadly, COVID19 hit and try as they might to see their big day through, this pandemic had other plans. Knowing how much they both wanted to start a family, Seth came home one night and said, “you know what, lets go get married on a mountain top”. One week later, Cinzia curated an entire new plan… back to where they met! They found me, they found Anthony and Nathaniel of Gold Heart Video, they found Seth a gorgeous Ted Baker blue suit, she picked up her Pronovias couture gown (which was coincidentally named “The Colorado”) and off to Aspen we went for what was one of the sweetest and most intimately beautiful days I’ve ever had the honor to capture. – Photographer: AMA Photography

Wedding Day Details as told by the Bride and Groom

Our day was not at all what we had planned. We were supposed to get married August 22, 2020 in Sonoma, CA. Unfortunately, 4 weeks before our wedding the venue and church had to cancel our nuptials due to government rollbacks. This decision was difficult on many levels, but mostly because we needed to start a family. I’m considered a high-risk pregnancy and we just couldn’t wait to have a baby. I had joked when we first started wedding planning that we should go get married on top of a mountain. After we got the news Seth suggested we get married on top of that mountain I had talked about when we first got engaged.

We decided that Colorado would be a beautiful location and a place that had a lot of significance to us since we met on a plane ride to Denver.  On my first visit to Colorado to visit Seth he brought me to Aspen and our first hike was on Maroon Bells.  And so it was decided, we were headed back to Colorado and to Aspen Mountain and Maroon Bells to elope!

We did not have a specific theme, but I wanted it to be romantic and elegant and among the mountains and trees. I wanted our love to compliment the breathtaking backdrop of Aspen. The colors we chose were a dark burgundy for his suit’s accent pieces, i.e. tie and pocket square, my lipstick, nails, and some flowers. We also had Seth wear an Indigo blue suit which was one of the original colors planned for our California wedding.   To coordinate I incorporated some blue accents in my bouquet. Seth is Jewish and we really wanted to include something traditional, so he stomped on the glass after we were married and saved a piece to take home!

Tear jerker alert: Cinzia lost her father just a few months before she met Seth. Cinzia and her dad were as close as a father and daughter could ever be. Cinzia fully believes that her daddy brought Seth to her on the plane that day, Tiger Lilies were incorporated into Cinzia’s bouquet and Seth’s boutonniere. This was done as a homage to Cinzia’s father since the Tiger Lilly is the national flower of Italy, his home country. When he passed the family had pieces of his favorite suit that he was buried in taken to keep and hold onto. The bride had her seamstress cut the piece in the shape of a heart and then had it sewn into the skirt of her gown. Seth fully believes that dad guided them to the mountain top… and I fully believe, Papa Enzo was sitting right there with them.

Even the best laid plans can change at a moment’s notice, but don’t let that stop you! I think people feel that they need everyone around them with all the fanfare to have a special and memorable day. I’d tell those people to believe in that fact that the two of you are absolutely enough. Seth and I are so happy that we eloped, we know that this is the way it was meant to happen, and we are so grateful that the day was truly just about the two of us and our love and commitment to each other.

Captured and submitted by AMA Photography.