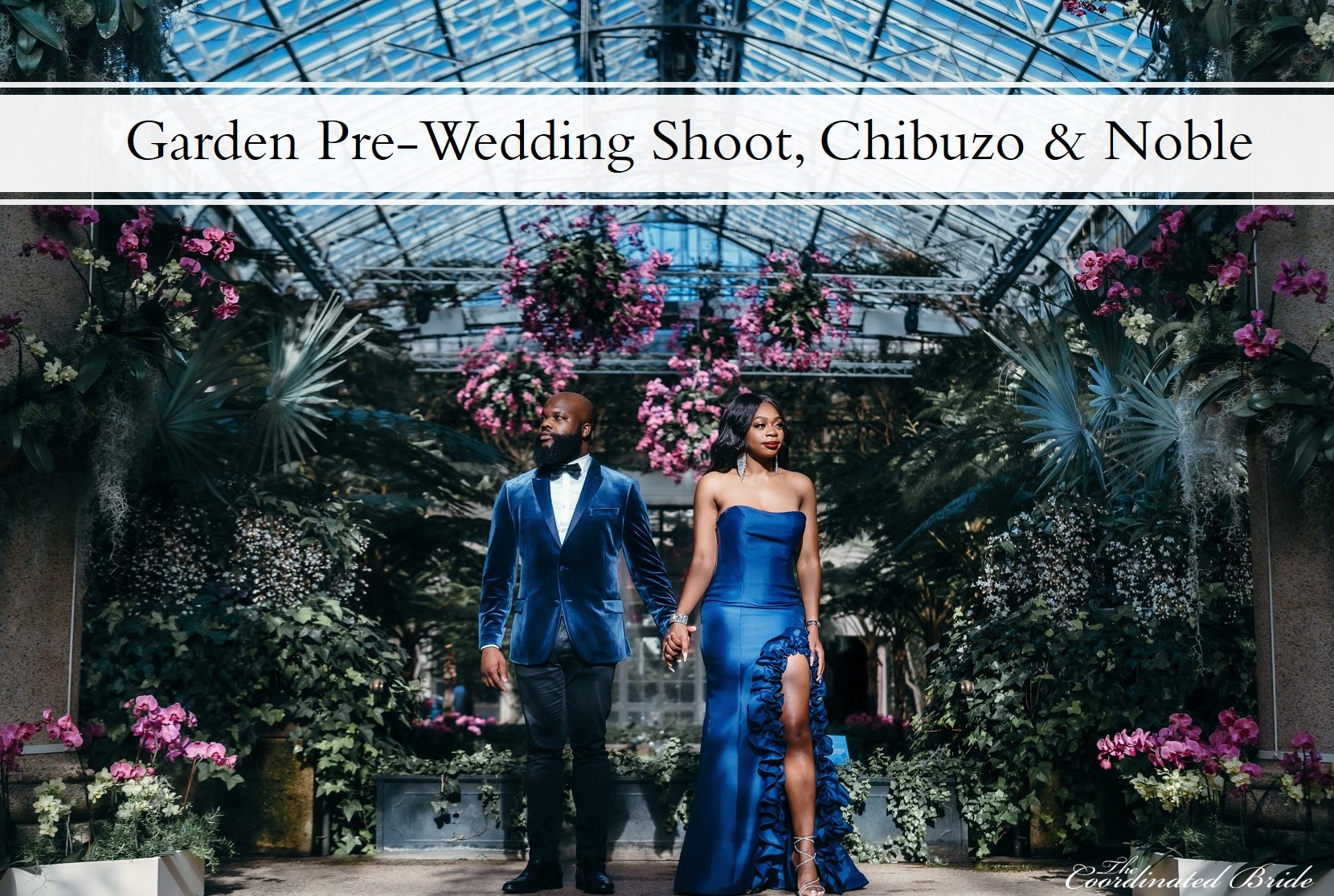 Chibuzo & Noble were set to be married on Saturday, June 20, 2020 in from of almost 350 friends and family.  As you can imagine – they are devastated that their wedding could not occur because of current circumstances.  #ANobleLoveStory #NoBu2020 is officially postponed to July 2021.

But!!!  Love isn’t cancelled.  We are honored to share Chibuzo & Noble’s love story today and are sending them love and hope as they, and all of us, battle through Covid19.

It’s a funny long story that I’ll try to make brief haha. So, I went to college in D.C. (Washington, D.C.) and subsequently made many of my lifelong friendships in the area – because of this, I would always find myself making frequent 2.5-hour drives back and forth between NJ (New Jersey) and MD (Maryland) for one function or another.  One day in September of 2016, I found myself making that drive again, but this time it was for my friend’s 25th birthday party.   The gathering was really small and intimate with only about 9 people present.  One of the guests at the party happened to remember that one of his friends lived in the same apartment complex that the party was being held.   He decided to text his friend letting him know about the gathering and little did I know, in walked my future husband.

It was so funny – He came in, sat down, and introduced himself.   When he said his name, “Noble,” I remember saying, “Noble Okeke?”  He got really excited, and was like “Yea,” with a big smile on his face lol – I think he thought I might’ve known him from somewhere or maybe that we had a mutual friend.     My next response was, “I think you follow me on Instagram.” Hahahaha. His face immediately changed to an awkward expression lol and he responded, “Yea, I follow everyone on Instagram.”    I felt bad for making him feel awkward in front of everyone so I kind of just kept quiet after that lol.   Believe it or not, we actually didn’t talk for the remainder of the party and I only found out later that he wanted to talk to me so badly, but the party didn’t end that pleasantly so there wasn’t really room for that.

Afterwards he tried and tried to figure out how to get my phone number so that he could get in touch with me. I asked him later, “Why didn’t you just ask your friend to ask my friends?” lol.   He said he wanted to contact me on his own.   So that leads to the next part of the story.  Remember earlier I said that he already followed me on Instagram.   So Noble contacts me via Instagram around November 2016 and asks me if I’ll be in town for Thanksgiving.   I thought that was so weird, so I didn’t even respond lol. I thought to myself, “why would you think I would be in town?   I live in NJ (New Jersey).” Hahaha.   Anyways, he proceeded to try and make small talk with me from time to time, and sometimes I would respond, other times not (horrible of me lol).   Then one day, he took the time to pour out his heart in one message to me that really caught my attention, though I was still being difficult.   Little did I know, he already decided that this would be his last attempt to try with me.   Anyway, one line in the message really stood out to me – “I just want to be in your space without getting in your way.”   I thought that was so poetic lolll.   Anyway, I finally decided to give him my number and here we are today lol 🙂

Noble and I love to learn and to challenge ourselves. We are big foodies and during this pandemic period, we’ve been challenging ourselves to make a lot of our favorite foods like steaks, hibachi, and we recently got a grill so we’ve been putting good use to it.   We’ve also rekindled a love of trying to crack Rubik’s cubes, so that has been a lot of fun as well. On another note, Noble and I are very forgiving and have learned the value of effective communication to get our points across and to make sure that each other feels heard and listened to. We make sure to never go to bed angry at each other.  He can always make me smile even when I’m mad lol.  He’s my best friend.  I could hang out with him all day every day and never get tired. I feel so blessed to be able to do life with this guy.

I can’t exactly pinpoint a day. From maybe day 2 of dating, Noble would always call me his girlfriend and I would always say, “I’m not your girlfriend,” lolll.  He knew that I was for him from the very beginning. I think girls are sometimes a little more difficult when it comes to realizing when someone is the one.   All I’ll say is that he cared and cares for me so much. He’s so willing to learn and grow.  He’s able to retrospectively evaluate himself and admit when he doesn’t know something or may be wrong in a situation. Noble makes me a better person and encourages me to reach my highest self. When I realized that I could live with him every day and never get annoyed to the point where I wanted him gone, that’s when I knew.

So I was in the thick of my Master’s program and was soo stressed. I really needed a vacation. One day I told Noble, “Hey can we take a vacation and go somewhere?” He said, “Sure.” So that’s how we ended up traveling to Mexico (Playa Mujeres/Cancun) in January 2018. We had a great time and we planned every aspect of the trip together so; my guard was down and I had no idea that I would leave there as a fiancé. I remember thinking that Noble would wait until I graduated that summer before he proposed. I also thought that when he proposed that he would surprise me somehow and since we planned the trip together a proposal didn’t even cross my mind.  On day one of our trip, Noble asked me if it would be fun to do a dinner cruise or dinner on the beach.  I hate the cold and thought that the dinner cruise would, for the most part, end up being pretty uncomfortable, so I chose dinner on the beach.  A funny part of the story is that Noble and I had a slight argument on the day of the proposal and I found out later how scared he got, knowing that he planned to propose later that day lolll.  Anyway, so we’re chilling on the beach in the daytime, after doing an excursion and riding ATVs. Noble goes to go find drinks for us and I now know that he ran into a photographer who was there photographing someone’s wedding.  He asked her if she could shoot our proposal and she did! That night when we were walking out to the beach, I noticed someone crouched in the sand with a camera and I got so annoyed and asked “Is she taking pictures of us?!” Hahahaha. I was annoyed because I felt that often times when I would travel to a foreign country, people would just start snapping pictures of me and I thought it was so odd lol.   Anyways, we go sit down to eat and meet our waiter, Saul, who was sooo nice by the way.   Noble decides to say, “Hey Saul can you take us a picture?” So Saul takes a few pictures and then as we’re turning around to go sit down, Noble says, “Wait let’s take one more picture.” I’m all shocked and making a weird face thinking, “You want to take more pictures?  You don’t even like taking pictures!” loll. Then he grabs my hands and starts telling me how much he loves me.  All I start doing is saying, “Oh my God, Oh my God,” over and over with my head tilted back laughing loudly lol.  I thought Noble was joking because I remember him joking like this before.  But when he pulled out the ring box from behind his back, I realized that he wasn’t joking and I asked, “Are you serious?” And when he told me that he was, the waterworks flew! I didn’t even think that I would ever cry, but oh man I cried lol. So afterward of course I Facetimed my mom, sisters, brother, friends, pretty much everyone I knew and showed them my ring lol. That was one of the best days of my life.  I love my ring!!! It’s a pear shaped, brilliant cut beauty with a halo of diamonds all around the main stone and a diamond-encrusted infinity band.

So my wedding was actually supposed to be on June 20, 2020 but has now been postponed to July 2021.   I was completely devastated. We had our perfect hashtag, #NoBu2020 and now I’m struggling to figure out what to do with it or how to change it (we also use #ANoBuLovestory).   The June 20, 2020 date was so beautiful to me and I was looking forward to having it as my anniversary date.  We also ordered a ton of personalized items with our wedding date on it as well as the thousands my dad spent on personalized gifts for the guests. So yea, a lot has gone on sadly – but through it all I’m happy for good health, life, and the opportunity to still go on.  So I guess to answer this question – most of my wedding is pretty much planned.  Looking on the bright side of things, it feels as though I have a whole other year to fine-tune and really have the complete wedding of my dreams.   Some things that I may have had to skip out on, I now have the opportunity to have and include! I can also come up with new ideas to make my wedding day better than it was going to be initially