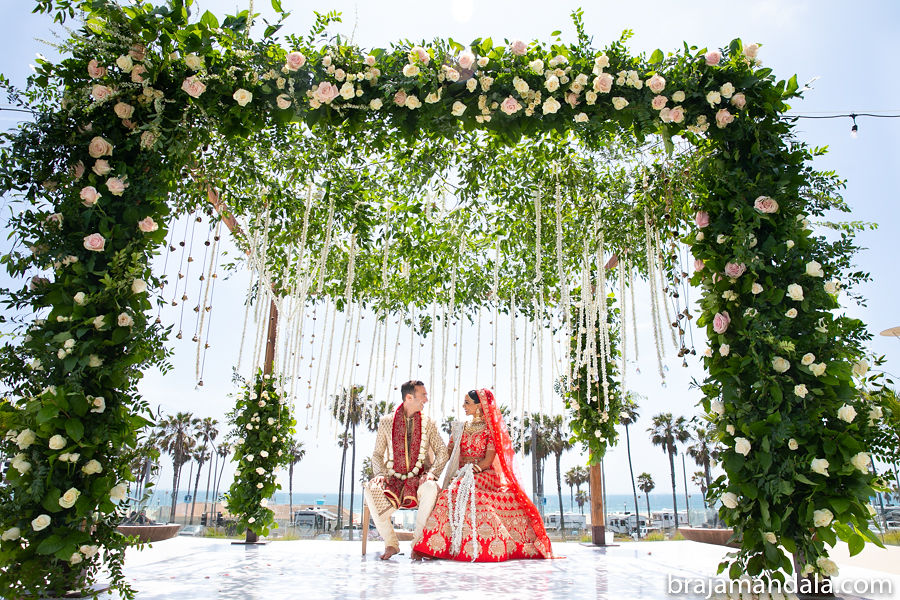 Poonam and Mark aka the bride and groom in today’s feature, got married at the Pasea Hotel in Huntington Beach, CA.   Poonam is Gujarati and Mark is Jewish.  The couple ensured that both cultures were represented at their wedding.   Poonam gave a wealth of information about the Gujarati and Jewish religion and cultures when recapping her wedding on social media {HERE}.

There are so many similarities between the hindu and jewish religions and cultures that Poonam wanted to integrate both Hindu and Jewish traditions into one ceremony.

Poonam chose coral as the color scheme for the wedding because it was the Pantone Color of the Year for 2019.   Her husband Mark was against the groomsmen wearing  pink or purple.  The groomsmen outfits were actually made from scratch.   Poonam and her family went to a fabric store in India to custom make their outfits.   They found a small tailor in a village whose store was no more than 6 feet by 6 feet. He had never made an outfit for a non- Indian man and was thrilled.   He asked to see a picture of every single groomsmen before creating the outfit so he can envision them in his work!

The sari blouses for her bridesmaid were also stitched and custom made by a different tailor in their small village in India who works from a small home no larger than 400 square feet! He made all 11 outfits in less than 4 days!

During their ceremony, which lasted 1.5 hours, the pundit chanted in Sanskrit, while their rabbi sang hymns in Hebrew.