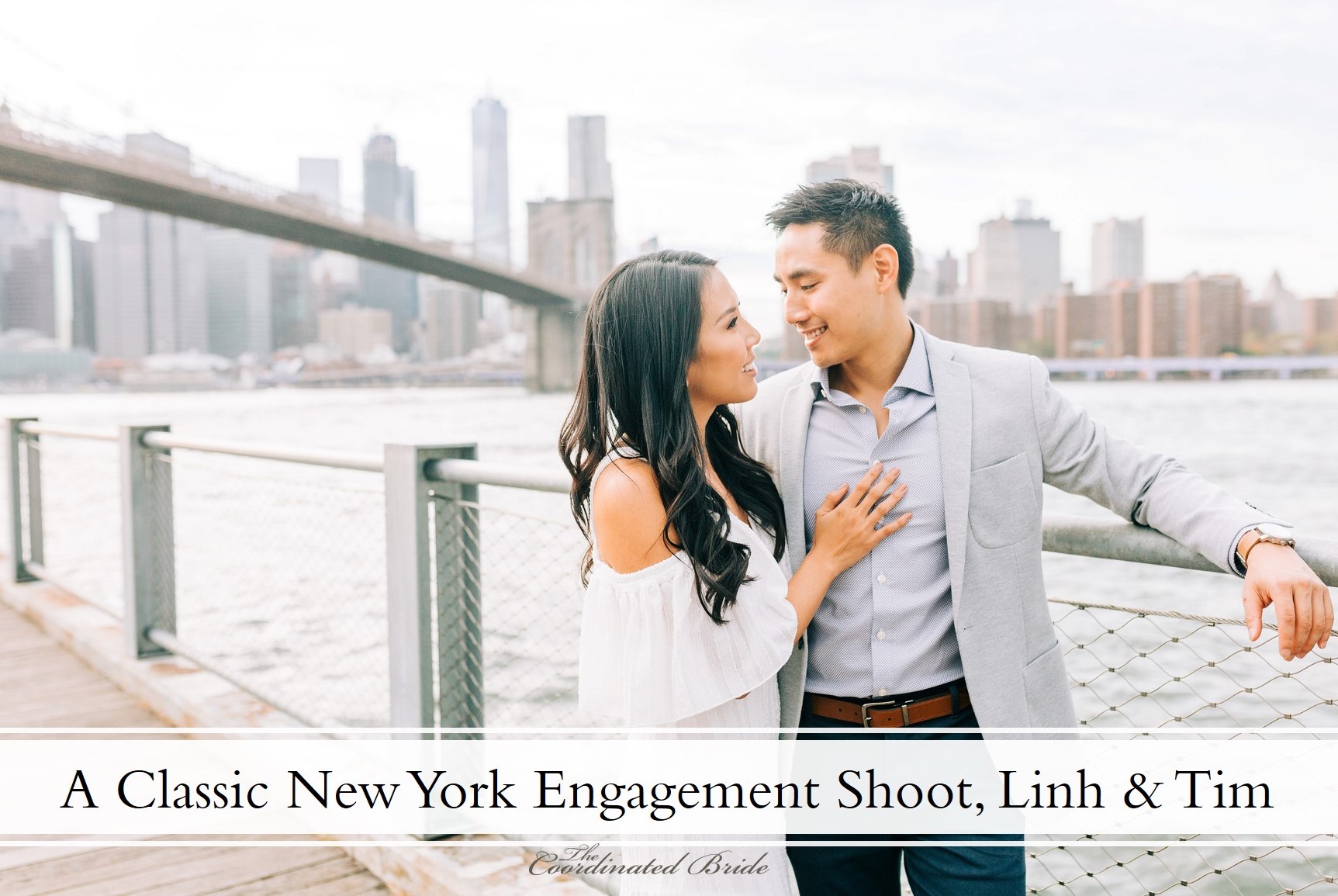 Linh and Tim chose two fabulous locations for their engagement session in the state where they once lived and fell in love – New York!  They coordinated with photographer, Yessica Grace Photography to capture fabulous images at the New York Public Library and in Dumbo, Brooklyn.  Although they met in New York, the pair has since moved to Charlotte, NC where they will have their wedding at the Providence Country Club this fall.

Linh first moved to NYC in Fall 2011 right after college and was invited by Ivan (Tim’s cousin) to join him and a few friends for Restaurant Week. The restaurant the boys picked happened to be right down the street from Linh’s new apartment, so she agreed to go and got Chelsea (her friend) to come with. As they were walking down 54th street towards the Russian Tea house for dinner, the girls passed by a group of guys who were being loud.   Realizing that they might know them, Tim’s friend stopped the girls and introduced themselves. Little did Linh know that the guy, Tim, that she met on the streets of New York City, would be the guy that she would end up marrying.    As cheesy as it sounds, it was love at first sight. A few days later they went on their first date at Madison Grill – the rest is history!

We will be celebrating our 8-year anniversary on June 30th of this year. As we reflect on the 8 years it flew by fast because we had so much fun together. We love each other’s company and are thriving during quarantine. We value each other’s independence and bring the best out of each other. Tim is very driven in everything he does and I’m very motherly. We are huge foodies and love to experience life through traveling and eating.

So funny as we had just talked about this and to be honest it was so hard for us to pin-point that one specific moment that we knew we were the one for each other, most likely the moment we first met each other in the streets of NYC. I believe there are multiple moments.  We’re both so different and independent in our own ways but together we’re a power team.  I keep him grounded and he pushes me to be my best. We are the ying and yang as corny as that sounds.  Our love and passion for traveling and food fuels our drive as well.

As a couple these two share a love for traveling! They’ve been traveling around the globe since they first started dating. Some of their favorite countries included Argentina, Peru, Vietnam, Mexico, to name a few. When Tim decided on the next location for the trip, Linh thought it was nothing out of the ordinary when he suggested Cappadocia, Turkey.   On the night before the proposal, Tim reminded Linh that they had to wake up around 5 am to try and catch a glimpse of the hot air balloons taking off at sunrise and be ready for the “tour guide” by 9 am. Anyone that knows Linh knows that she’s not a morning person, but she reluctantly got up. The morning was incredibly beautiful – the sunrise was breath-taking and the hot air balloons were the perfect touch.  However, Linh had no idea that as was busy snapping away pictures, Tim was fidgeting and trying to figure out how to get the “tour guide” aka the photographer onto the roof top without her noticing.   As the hot air balloons started to fly above them, she turned around and the next thing she saw was Tim down on one knee.   Her heart was racing and she started tearing up. Everything else was a blur, but she remembered him telling her “I can’t wait to spend the rest of my life with you!” What was already such a beautiful morning turned out to be the happiest day of their life!   The engagement ring is simple but beautiful and the perfect size.  Diamonds on the side and the perfect round cut.

Linh and Tim are eagerly anticipating their wedding later this year and have already planned 75% of it.  The wedding will coordinate around a dusty rose color and will be classic with a touch of modern and whimsical.