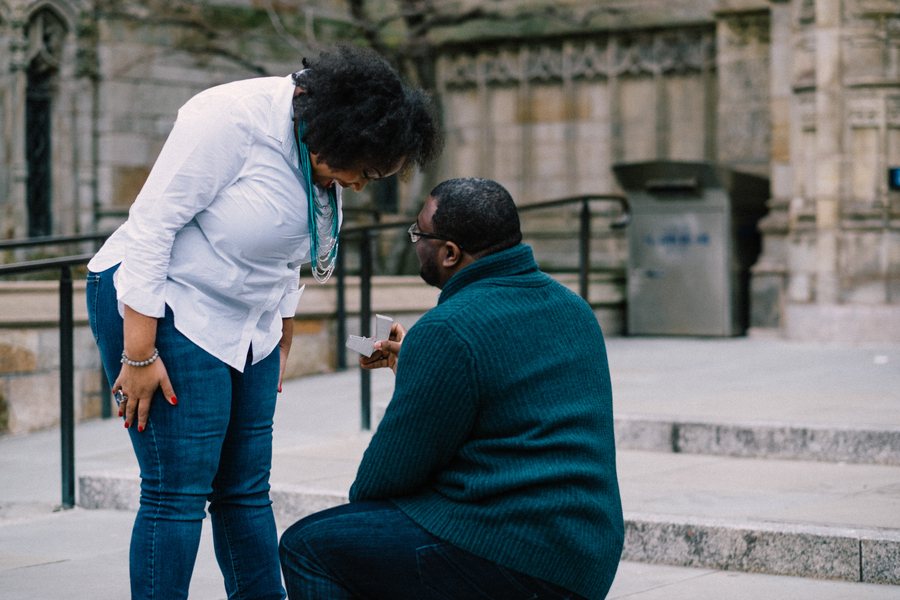 Shawnee and Andre met at a bridal expo in 2011 when Shawnee was helping her cousin plan her wedding. They didn’t get to know each other until reconnecting again through the same mutual friend the following year.  In March 2012, Shawnee hosted her birthday party at a local restaurant where Andre found himself among many invited guests. That night, they had a long conversation at the bar which extended to inbox messages on Facebook. They eventually exchanged phone numbers.

To Andre’s surprise, Shawnee chose Panera Bread to have their first date, then requested Cozi (another small bistro) for the second date. On the third date, Andre insisted they go to a restaurant, sit down and be served, so they went to Bertucci’s and saw a movie afterward. They made things official on Memorial Day, 2012 and on New Years Eve 2015, Andre surprised his lovely bride-to-be by asking for her hand in marriage. He booked a couples photo-shoot with mutual friend and photographer Keith Claytor, the same friend who hosted the event where they first met. Andre & Shawnee walked through a courtyard on Yale University’s campus taking photos and sharing intimate moments. Unbeknownst to Shawnee, Keith & Andre were playing a game of “hide the ring” the entire time. They reached the steps of a beautiful building at the end of the courtyard and Andre got down on one knee and proposed. And now a new chapter begins on their journey to becoming Mr. & Mrs. Rochester!

Her Story: “I was so excited about having our photo shoot with TimeFrozen, I was stressing over hair, clothes, shoes and Andre assured me that I didn’t have to overdo or over think what I was going to look like in the shoot. We booked my appointment with my friend Brettnee of Painted by Brettnee for my makeup & planned our casual outfits out. We met with Keith at the photo studio and he drove us to our location in New Haven. Although I was really excited, I was very nervous because the perfect boots I found for this shoot were hurting 🙂 & Keith assured me I would be fine because we have a 4 hour photo shoot ahead of us! I panicked!!!! Fortunately, we didn’t have an entire 4 hour photo shoot, but we moved around the courtyard of the Yale campus taking photos, talking and laughing. We finally made it to the very rear of the courtyard, taking photos & chatting…. Andre asks me “Do you Love Me?” I said “Yes”. He then proceeds to say “Well, be with me for the rest of your life” and gets down on his knee, grabs the ring and proposes! I said YES!!!!!!!!!!!!!!!”

His Story: “I had been contemplating my proposal for at least a year. Keith was there when we met and it was only right that I go with TimeFrozen to capture the moment I asked Shawnee to marry me. Shawnee had been telling me for at least a year that she wants to do a shoot with Keith. He is not only a close friend of ours but I am a huge fan of his work. I’ve followed his work since we first met, over 6 years ago. When the time was right, I contacted Keith and booked our photo shoot for New Years Eve. I chose Yale University in New Haven for the shoot because I loved the architecture on the campus. When we decided to wear teal for the shoot, I knew the stone buildings would be the perfect backdrop. We carpooled to New Haven and stopped in this beautiful courtyard at Yale. The box for the ring was really big and I couldn’t hide it in my sweater pocket so I had to sneak it to Keith somehow. We got out of the car and, fortunately for me, Shawnee forgot something inside. I took that opportunity to hide the ring in Keith’s photo bag. As we walked around laughing, talking and posing I was scoping out to the courtyard to find the right place to propose. We got about midway through the courtyard and I let Keith know that I wanted to propose in front of this beautiful building in the rear of the courtyard. It was an old library with some really cool doors. After Shawnee’s heel got stuck between the stones in the walkway and I almost ripped my jacket on one of the walls we clumsily made it to the rear of the courtyard. People kept coming up to take pictures of the building so we had to keep walking around shooting photos until the small crowd cleared. Keith pretended to fiddle around with the camera to set up some shots and hid the box on the stairs. When we walked up to take our next set of photos he signaled where it was by looking down. I walked up and I placed my foot up against the box so I would remember where it is. The silver Zales box blended right in with the stairs. Shawnee noticed something but assumed it was trash or something. We took a few photos and I asked her if she loves me. Of course she said yes and then I said, ” Be my wife”. She then replied by asking “What are you saying”. I said, “Spend forever with me”, then I got down on one knee, grabbed the box, showed her the ring and placed it on her finger while she said yes. She looked at me with the most beautiful smile and we kissed. She then did a little celebratory dance while I popped my collar behind her. An elderly couple walked by us and congratulated us, then we continued the shoot for another 20 minutes until Shawnee could no longer deal with her boots. Keith got the car and we took a bunch of selfies while waiting.”

Check out the beautiful images captured by TimeFrozen Photography below! 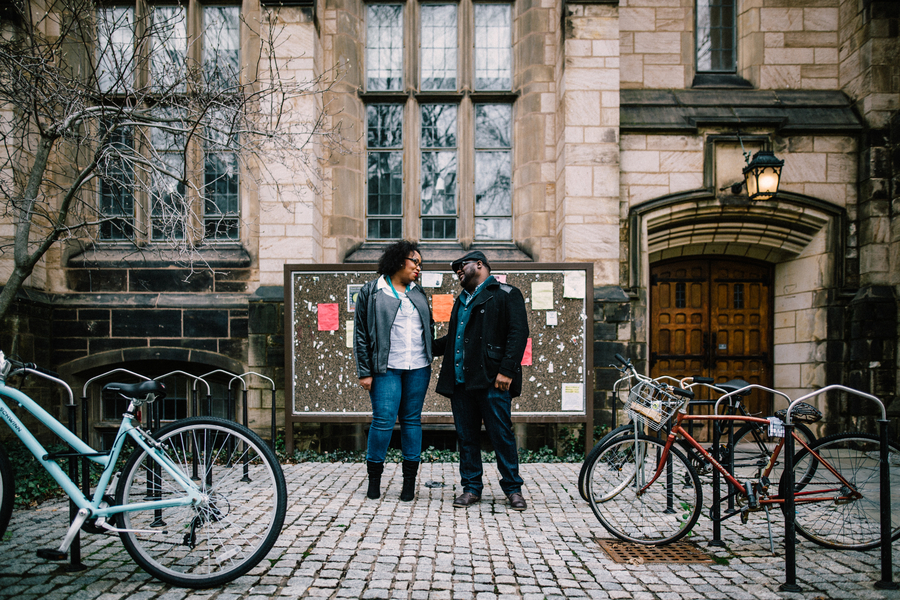 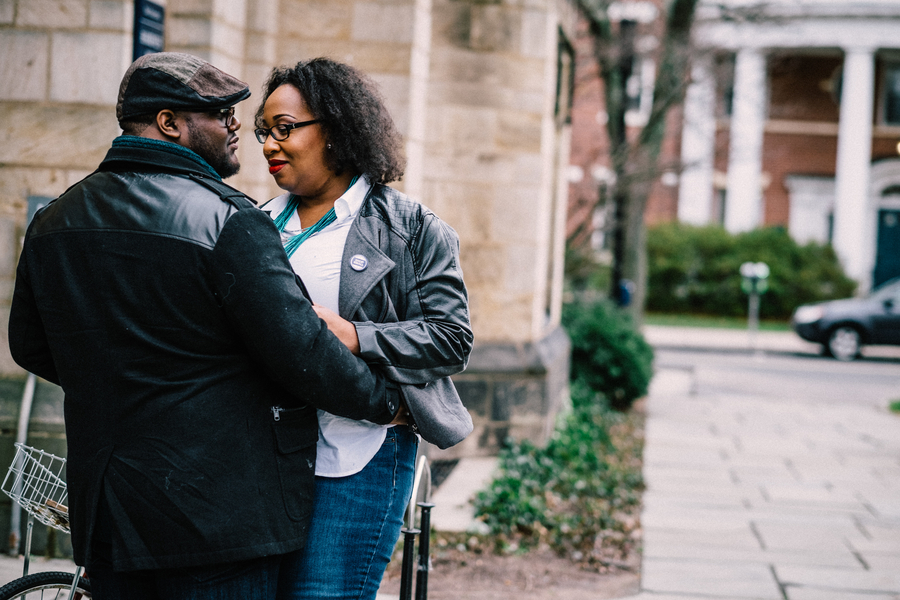 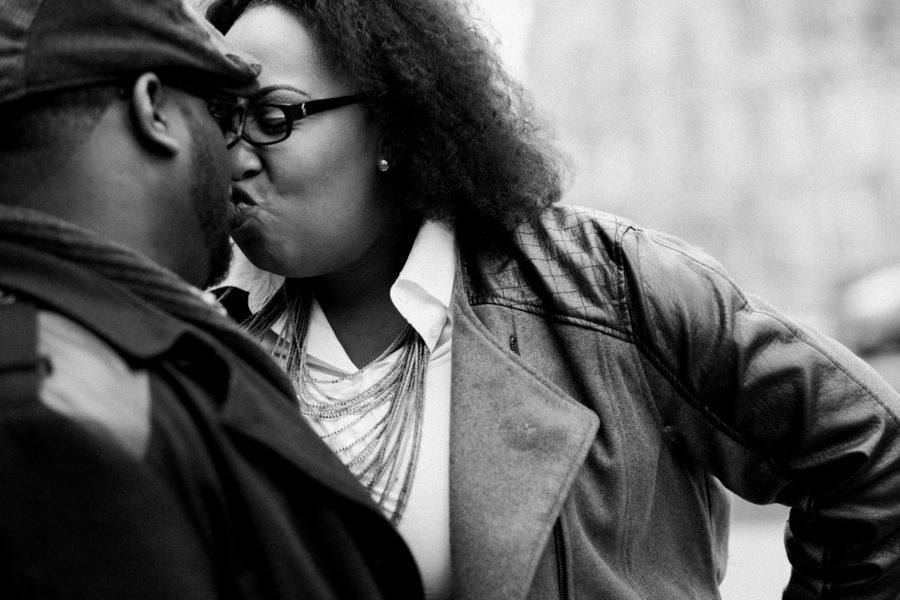 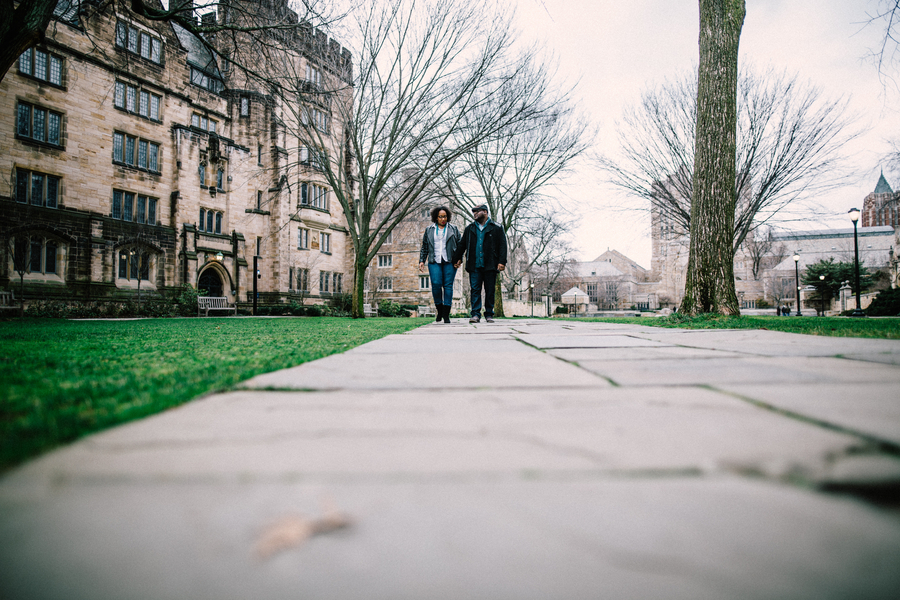 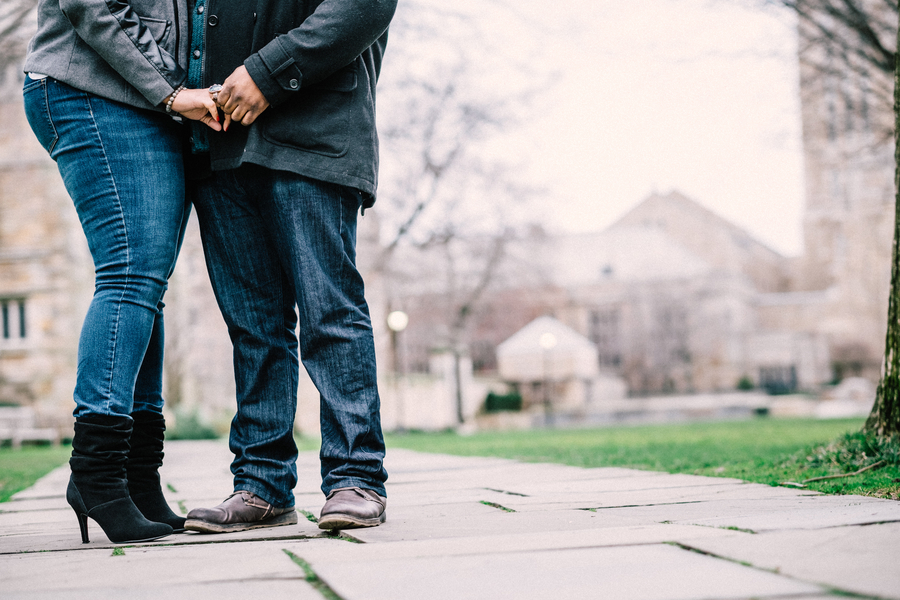 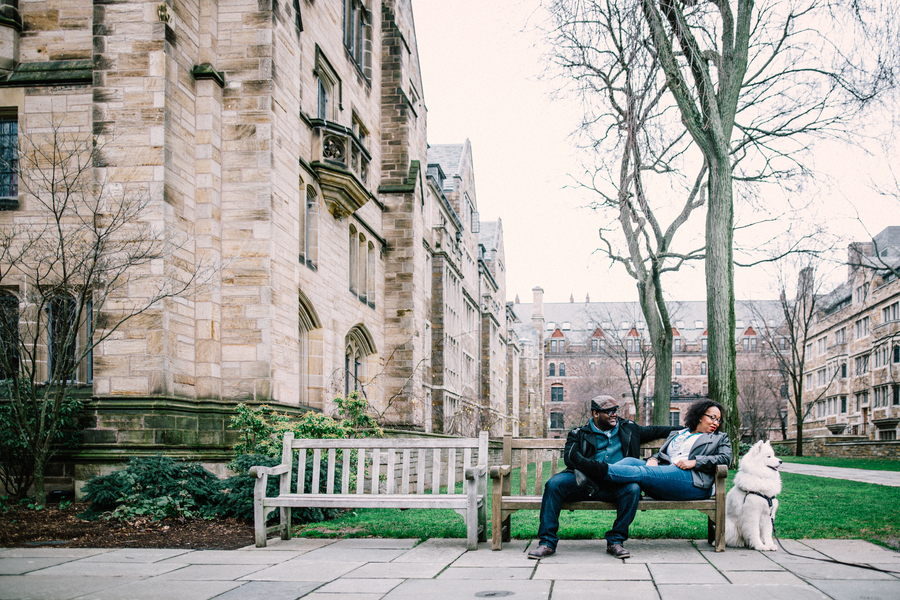 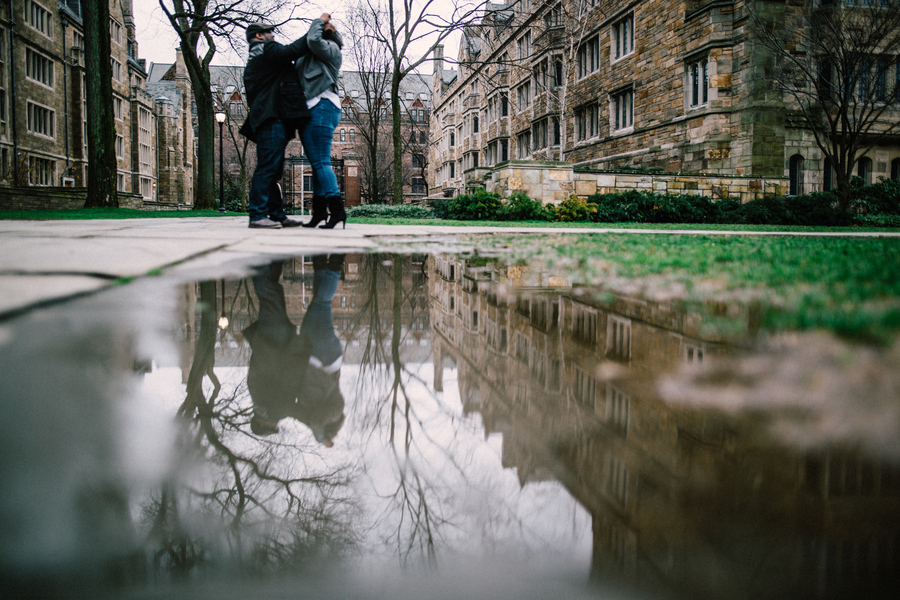 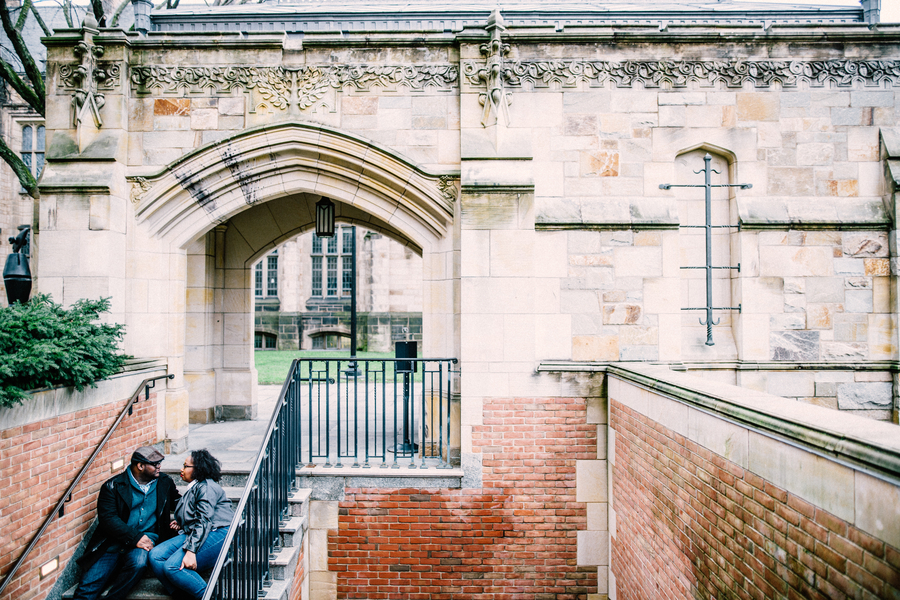 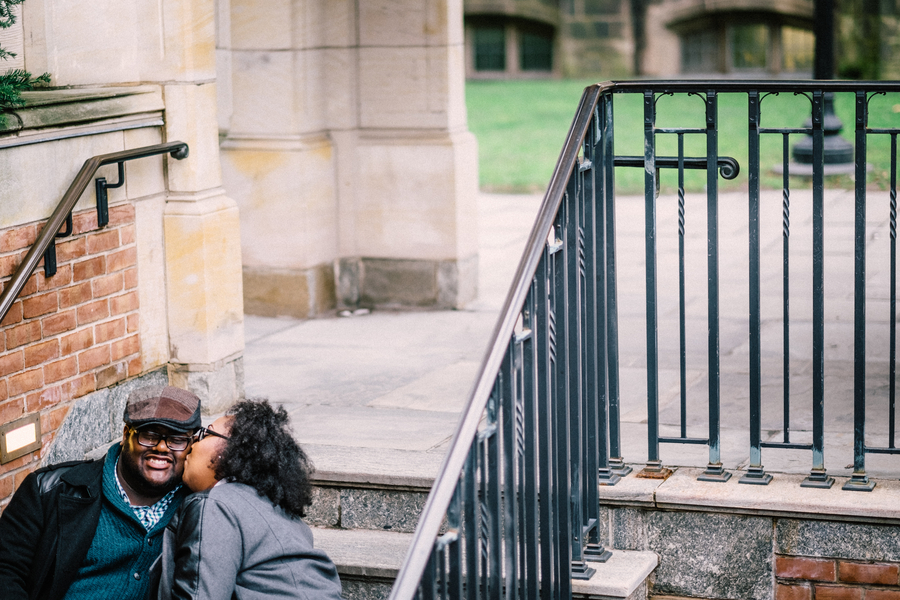 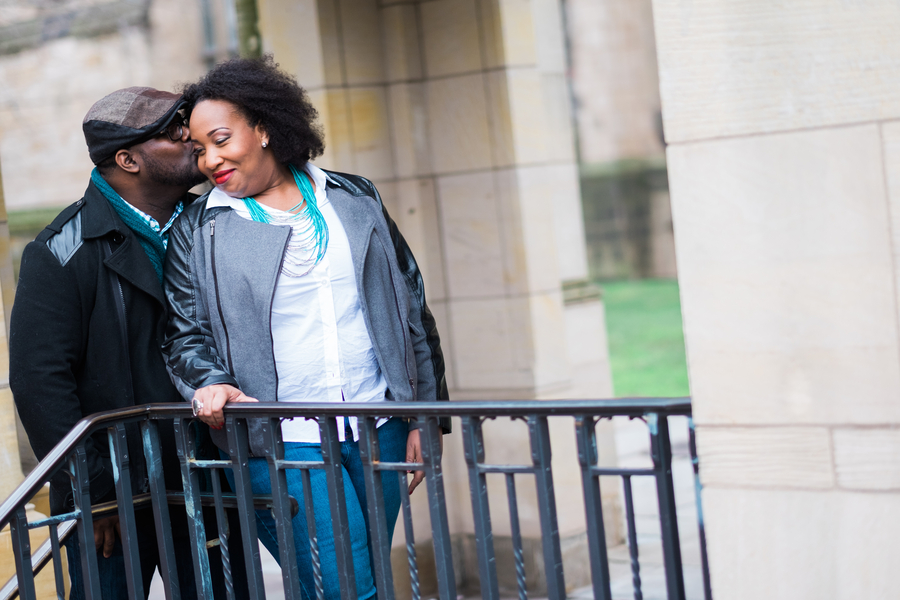 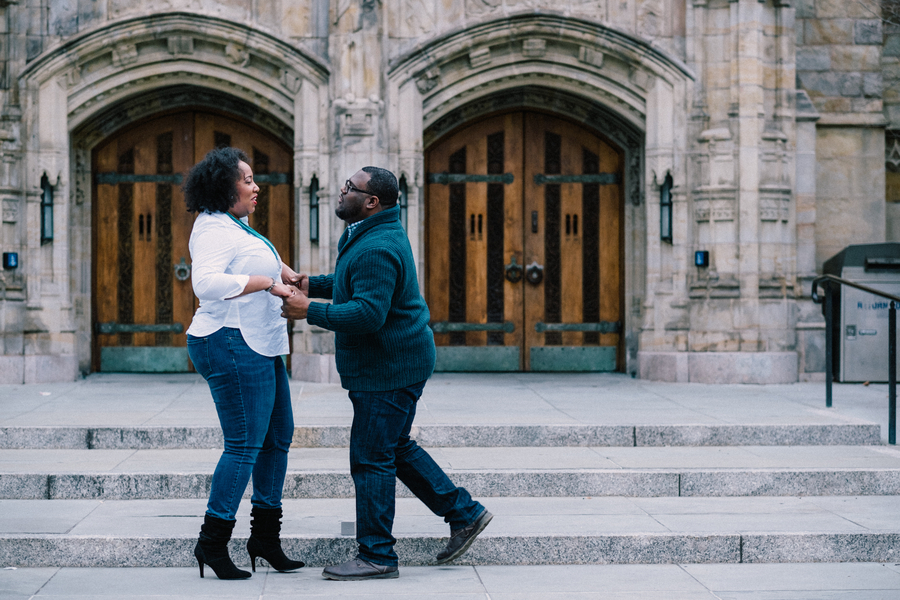 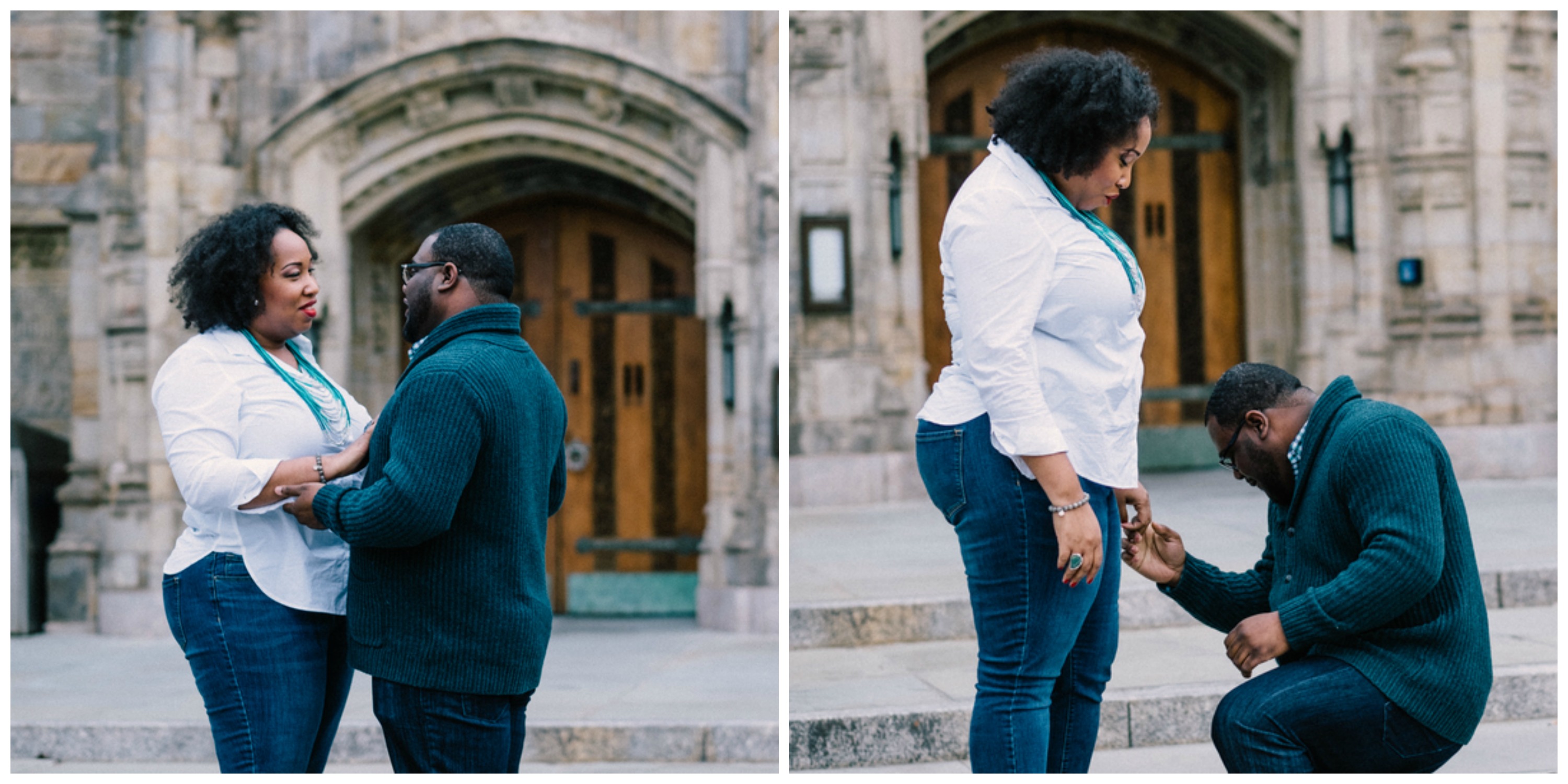 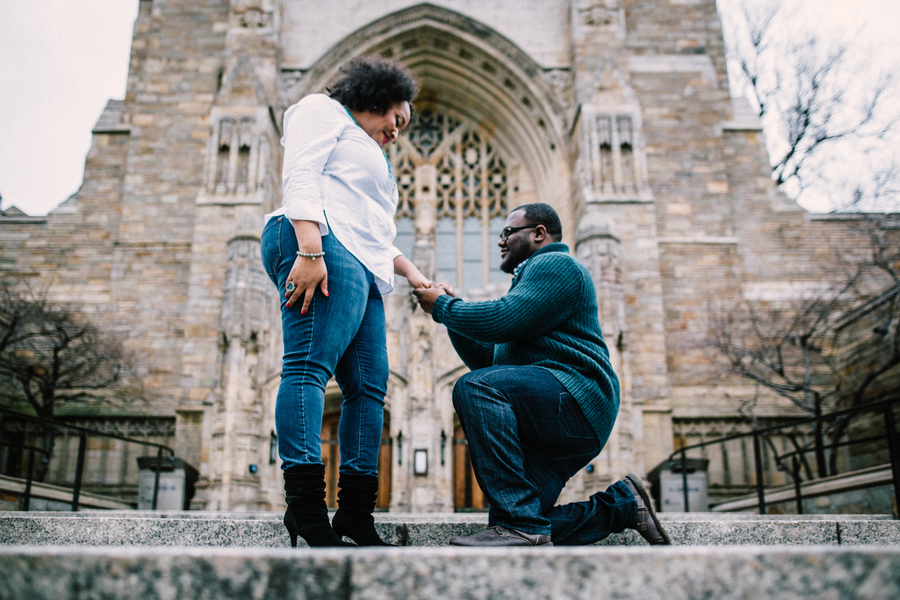 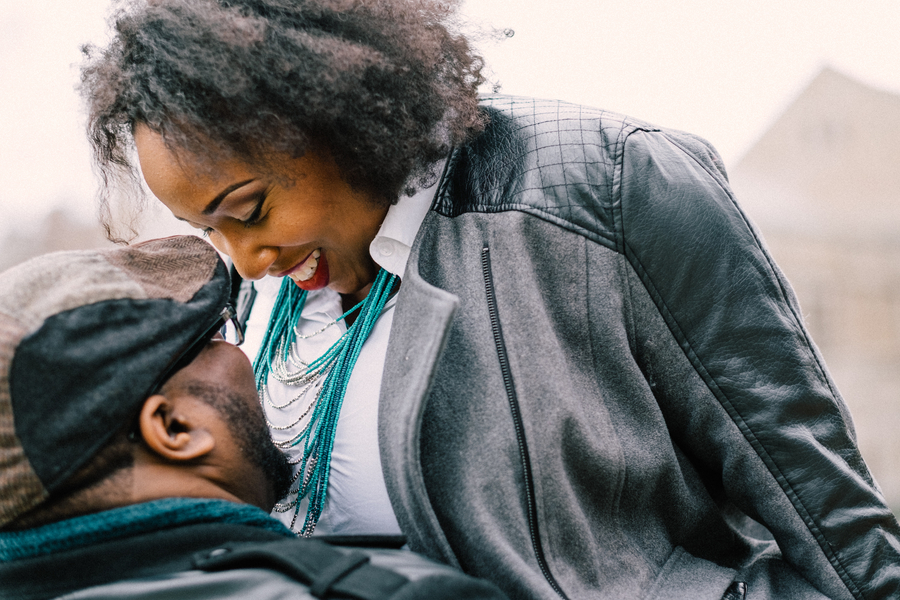 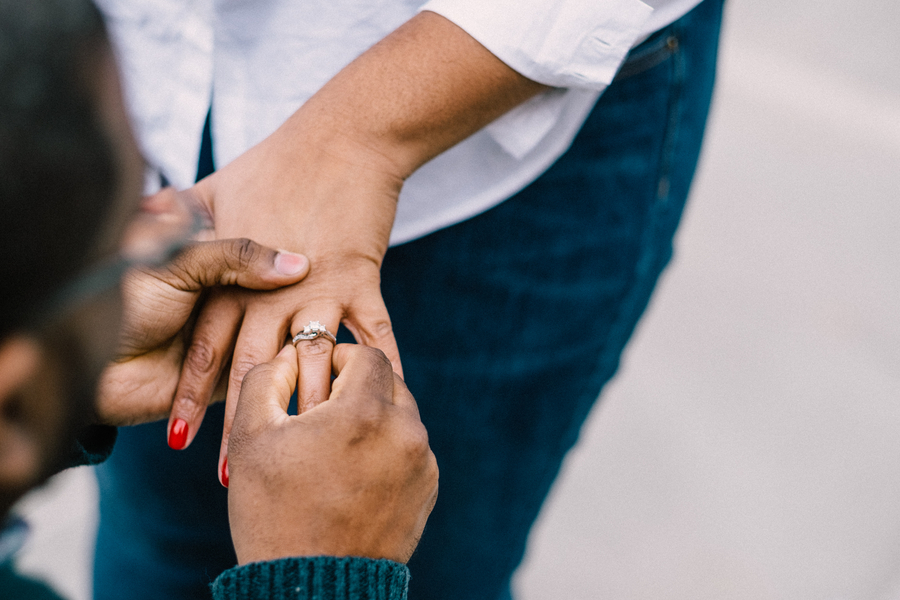 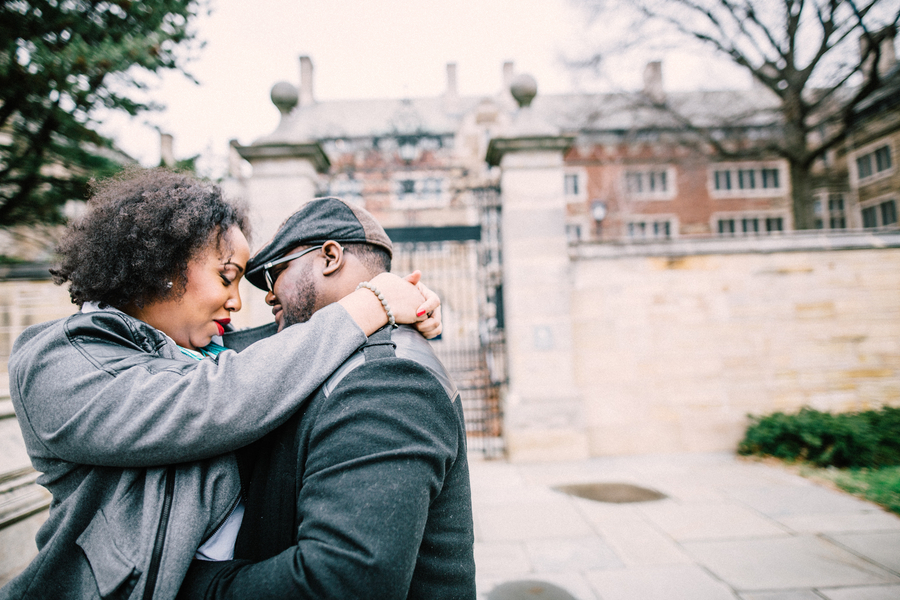 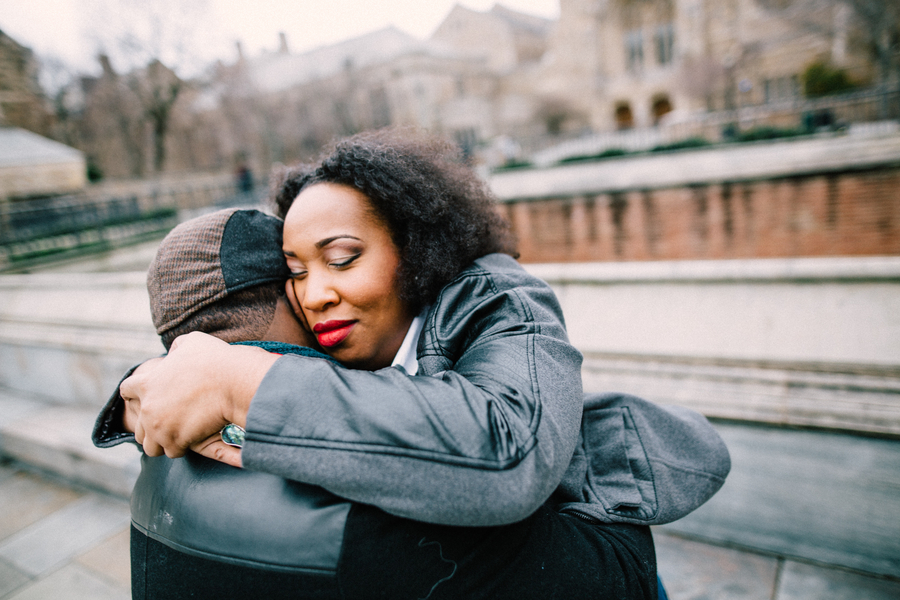 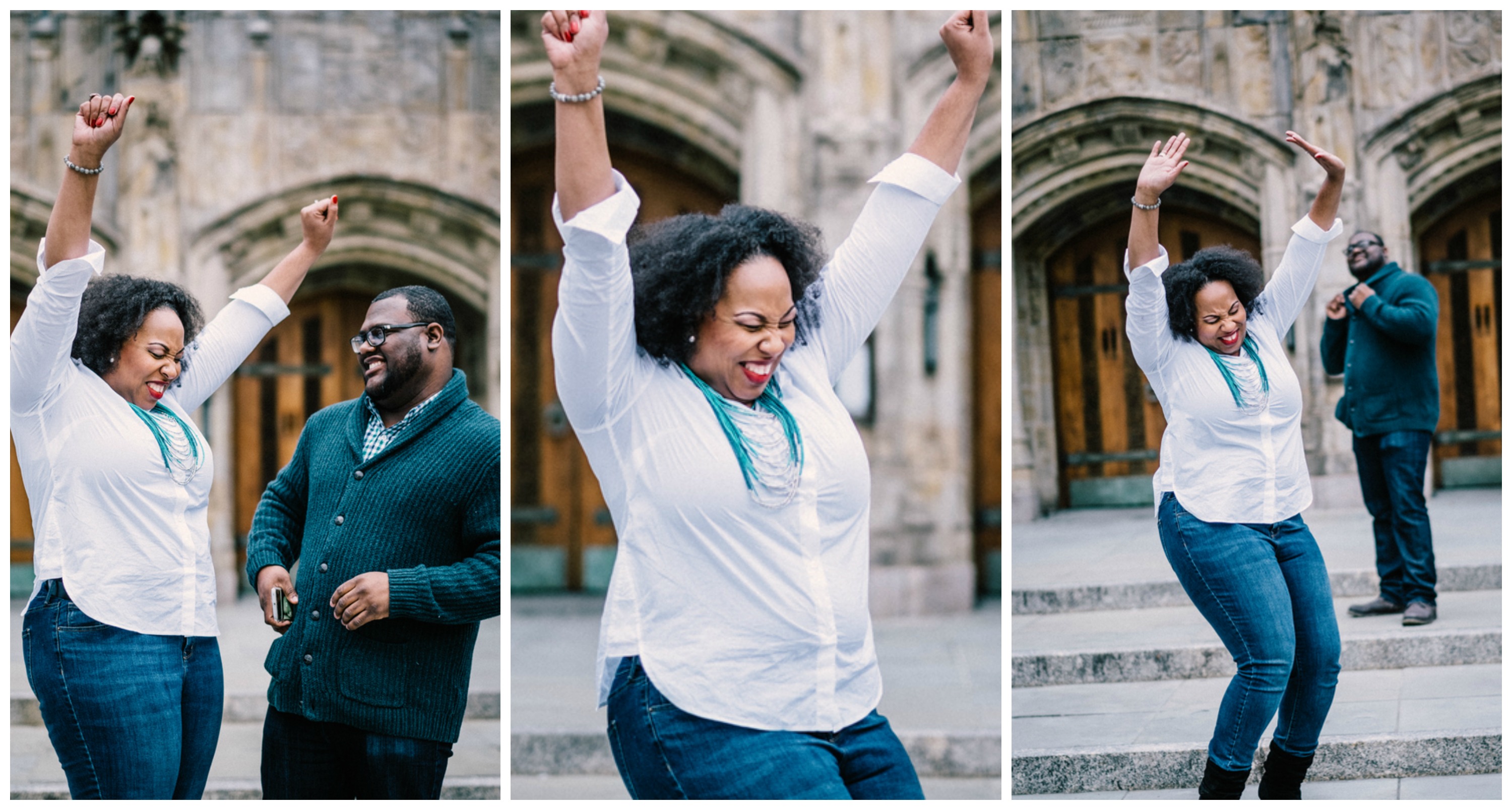 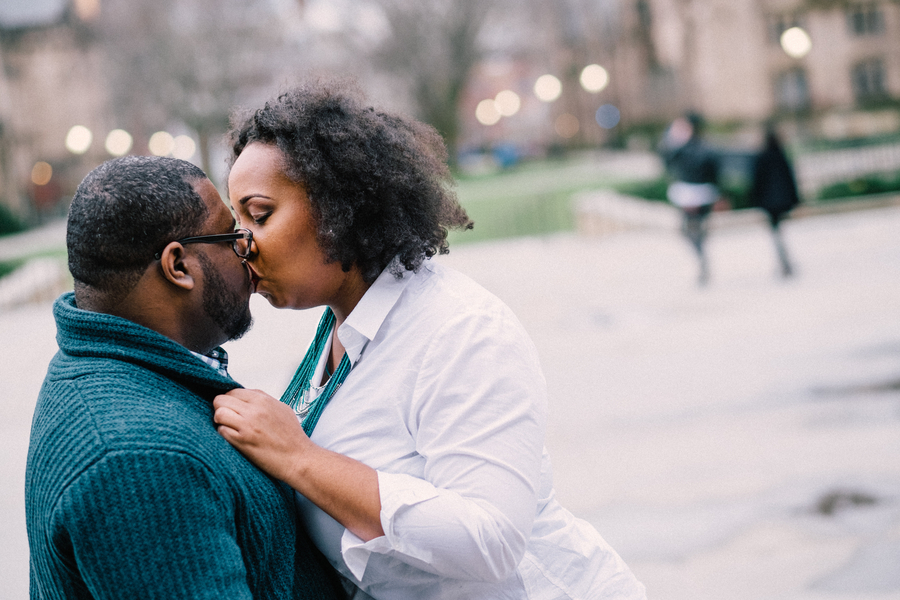 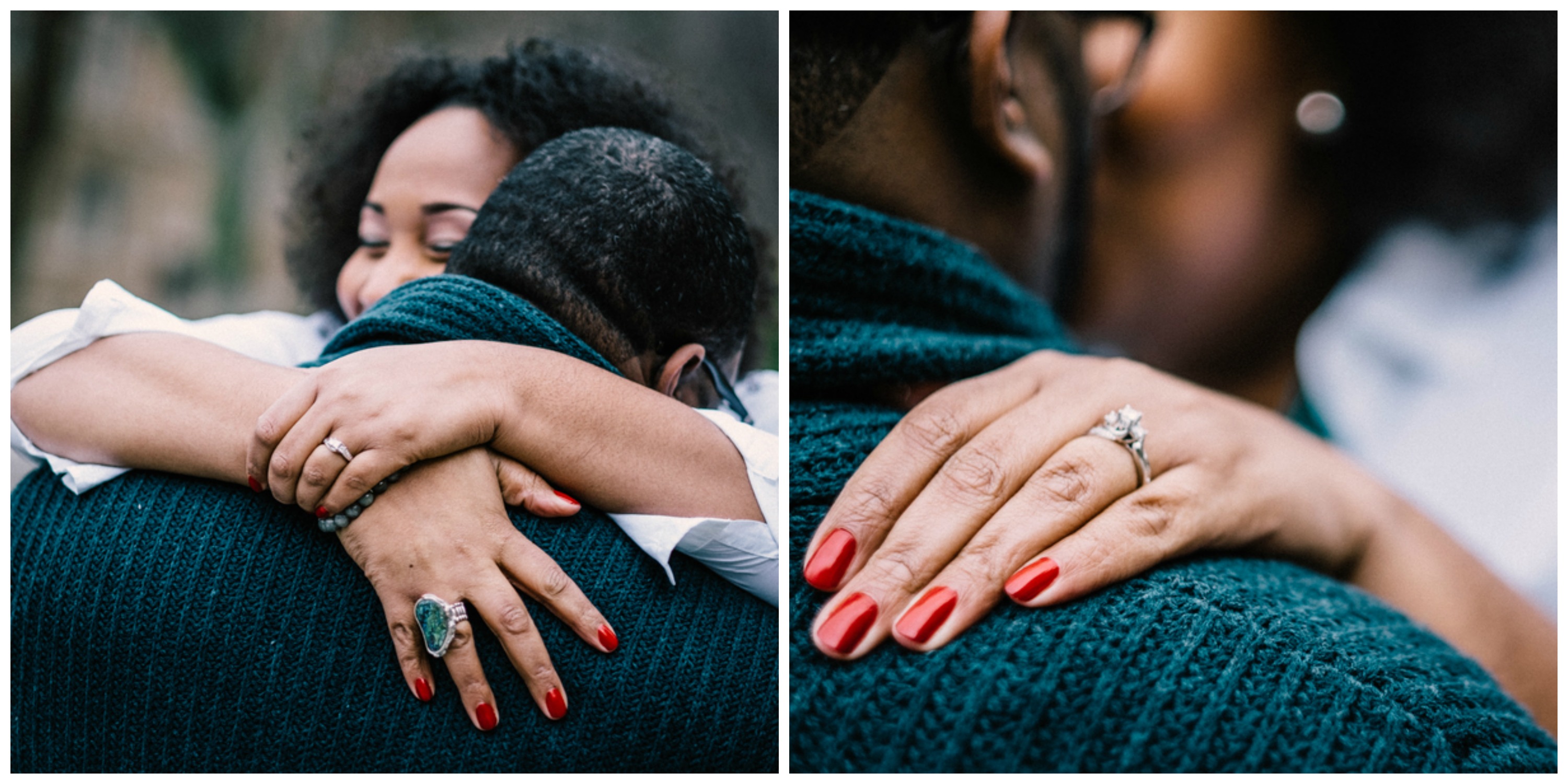 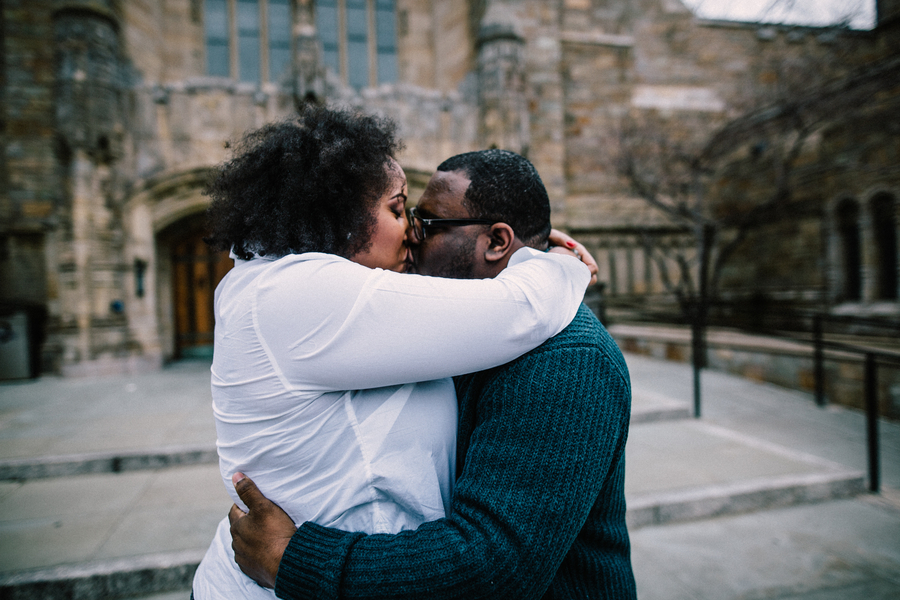 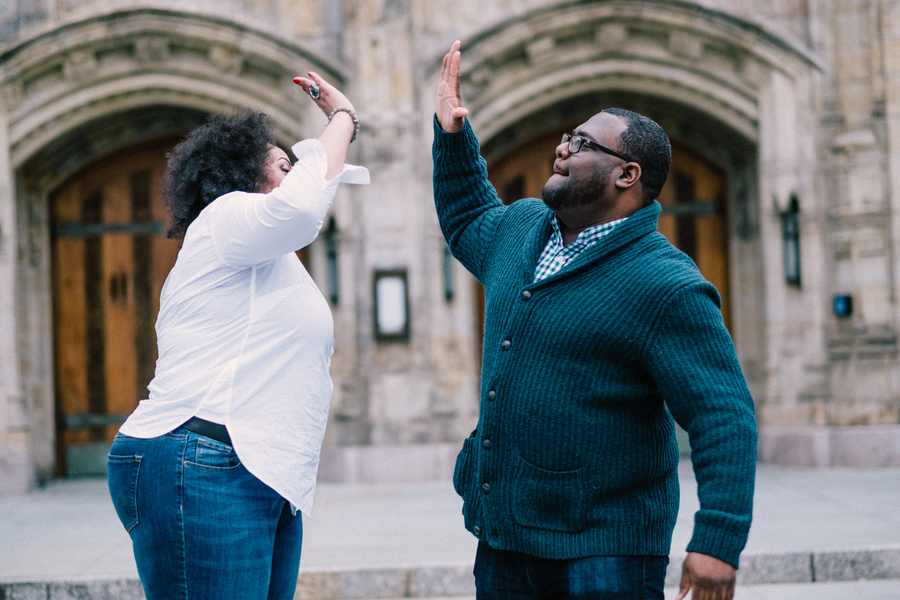 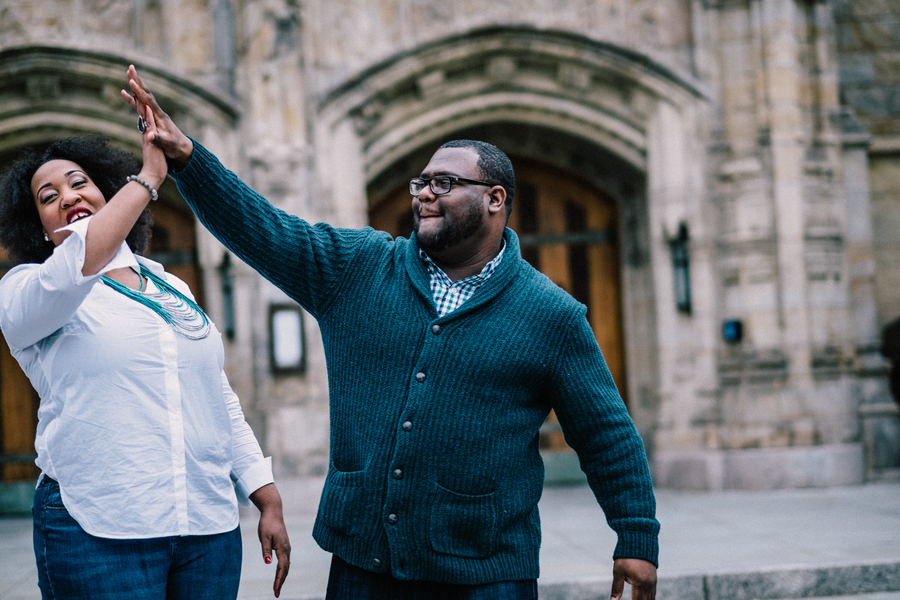 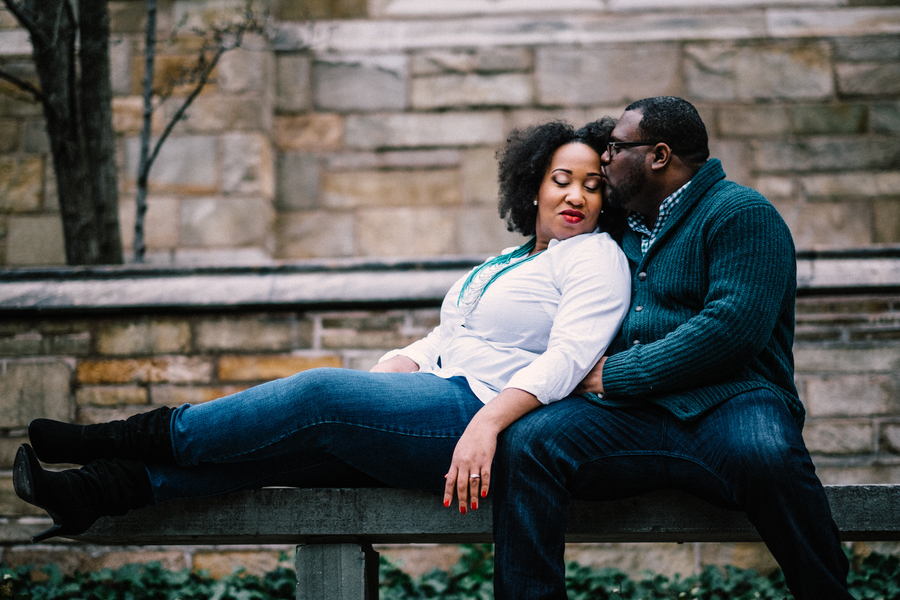 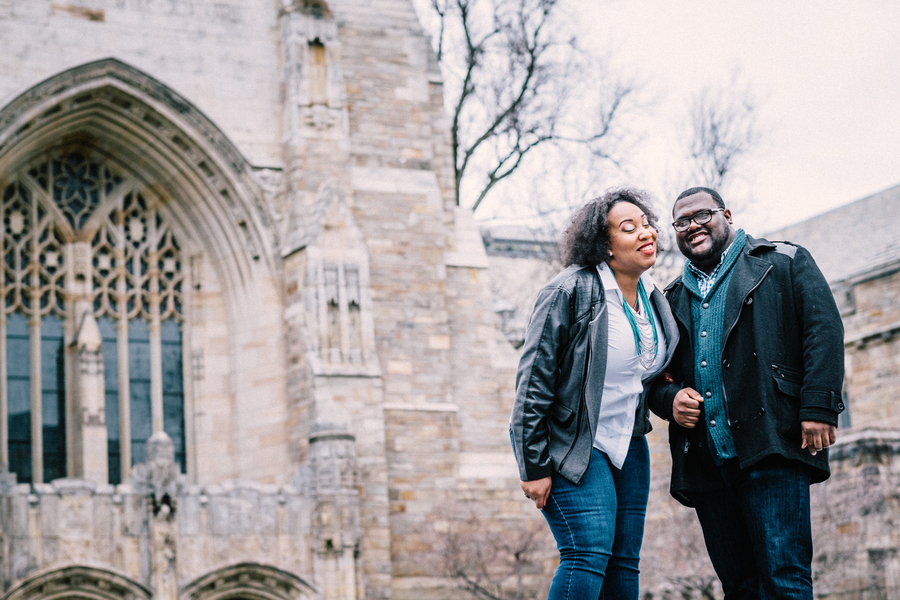