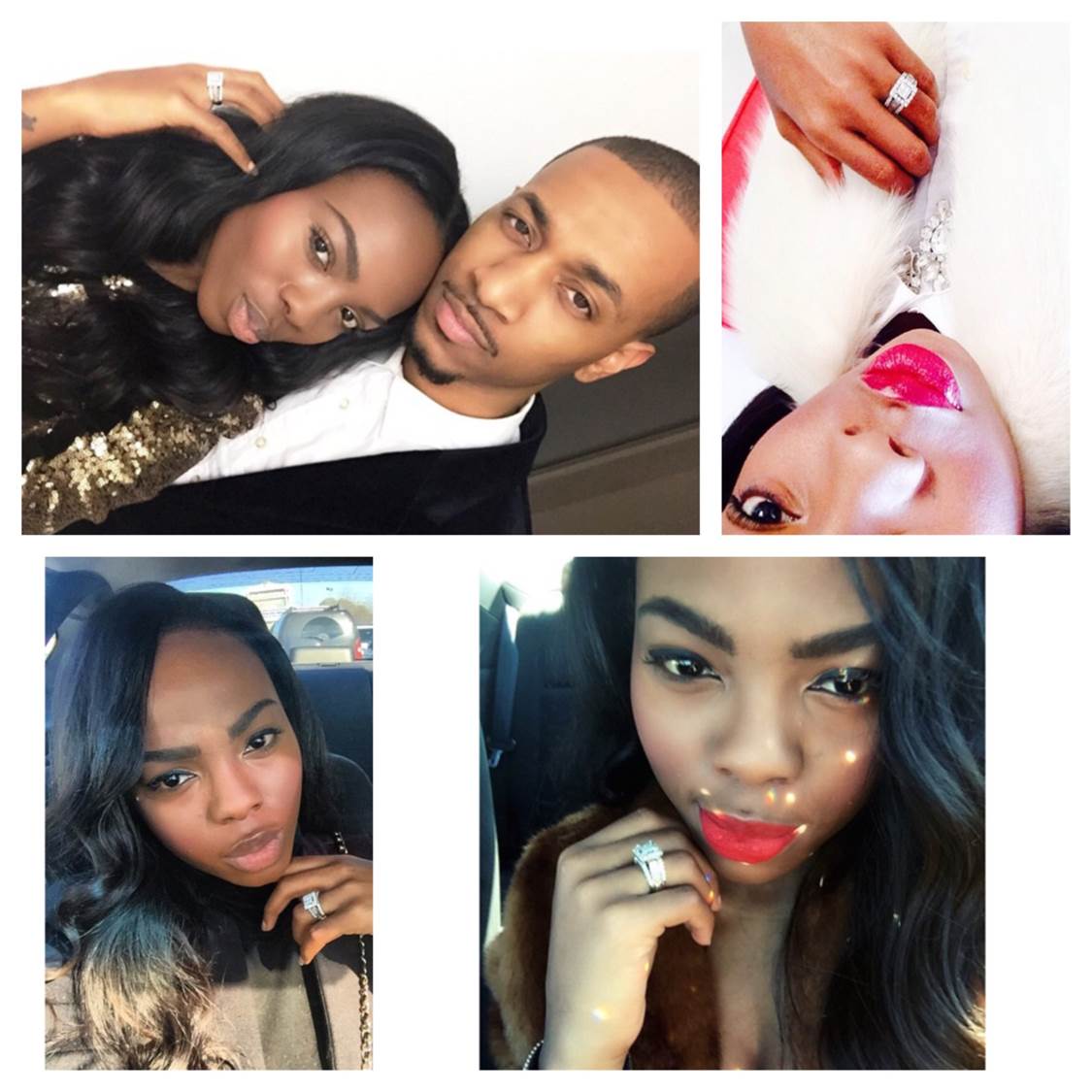 Meet Angeliqua, our first Certified Coordinated Bride getting married in 2017.  Angeliqua and fiancé Donte are getting married on September 29, 2017.   Their wedding colors are Black, White and Gold and the wedding vision is Royal Wedding.  Let’s see how their journey began.

Our journey as a couple began May 24, 2013 on one of the most memorable days of my life.  Donte and I met through an old mutual friend, who at the time was having a birthday party at RA Sushi Bar and then an after party at the W Hotel here in Atlanta.  I was the event planner for her birthday party.     During the birthday party planning process, my friend would tell me about my now fiancé Donte.    She said that she was inviting this guy who was into music, had his own business and a heart for God, like mine.  She said that I would like him and after that description, I was excited to put a face to the description.

I was running late the day of the party because I was also in school at the time working on my degree.    When she first introduced me I just looked at him and in my mind I was like “he’s fine”.  We actually didn’t get a chance to converse because I was so busy running around at the event and  making sure everything was organized and that everyone was having  a good time.

Fast forward.  After the event, we began following each other on social media and I found myself liking most of his pictures and leaving comments telling him to “Give me a Call” or “Shoot me a Text”.   Of course he waited a few days to text me.  I expressed to him how nervous I was.  He told me I was beautiful and that he actually prayed to God that he would find his wife at that birthday party.  I believed him and he seemed truly genuine.

We began texting about God, Love, and our goals.  The texting turned into daily conversations that lasted well into the morning hours.    One day I invited him to join me at a restaurant and I didn’t think that he was going to show up until he called and said that he was a few minutes away.   From there our friendship started to blossom into something more.   Since then we’ve experienced many life changes, including me completing my degree.  Although we experienced hardships which have defined our relationship, we continue to support each other. 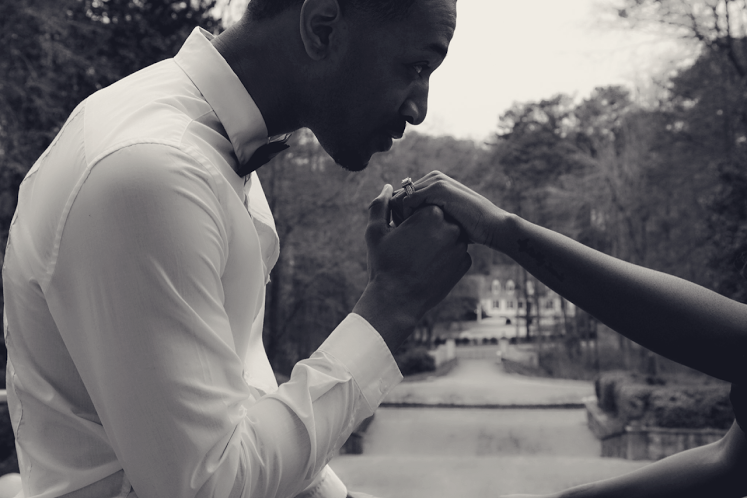 According to Donte, his original intent was to propose in a huge public way by taking me on a helicopter ride around Atlanta and a very romantic dinner at a restaurant.   But we both lead very public lives so instead he opted to propose in the privacy of his home on the eve of Thanksgiving in 2014.   I guess I kind of messed up his plans.  I remember us having a small argument and him acting very suspicious.

Donte previously told me that he was going to surprise me and that he bought me a ring but of course I didn’t know when he was going to propose.   The day before Thanksgiving, in the midst of our argument, he said “Do you want to be engaged on Thanksgiving?”   I said “No, you’re playing.  Don’t play with my emotions like that but it would be grand.”   Donte got down on one knee and asked me if I would marry him and the rest was history.    The next day at Thansgiving dinner my family was so happy for me!  It was the best Thanksgiving Ever!

Now we are taking the next step and doing things the right way in God’s eyes as we prepare to spend the rest of our lives together.  We’re really the epitome of a kingdom power couple.  We are each other’s support system, business partner, best friend, and accountability partner.  We love having fun stylishly and building our empire together for our future family.

We are a couple that is completely ready to see what God has in store for us as The Worrell’s.

Our engagement session was held at the Swan House – Art History Center in Atlanta Ga || Images by Myles the Artist {@myles.thartist} || Makeup by Terria Shelton {@eclectikbeauty} || Styling by me!  {@Stylishlyiconic}. 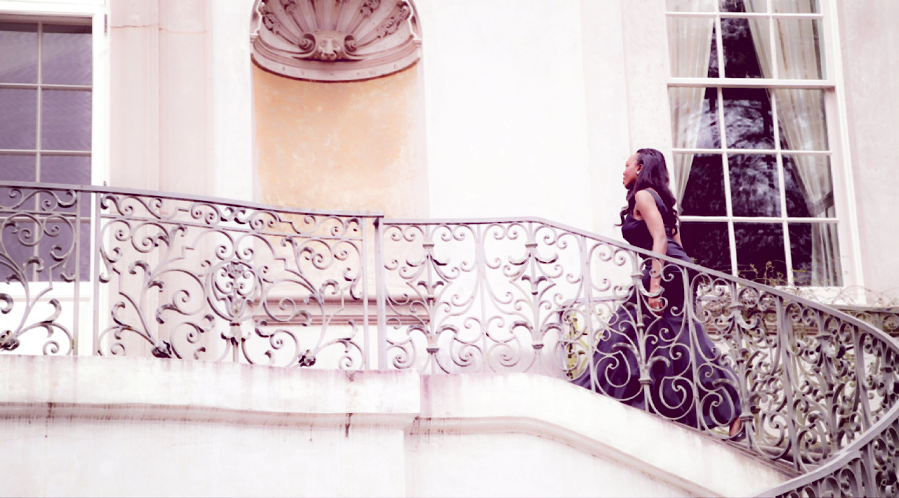 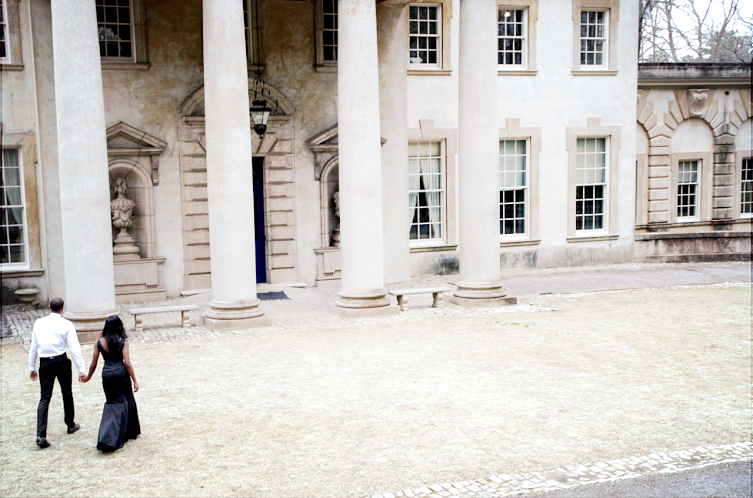 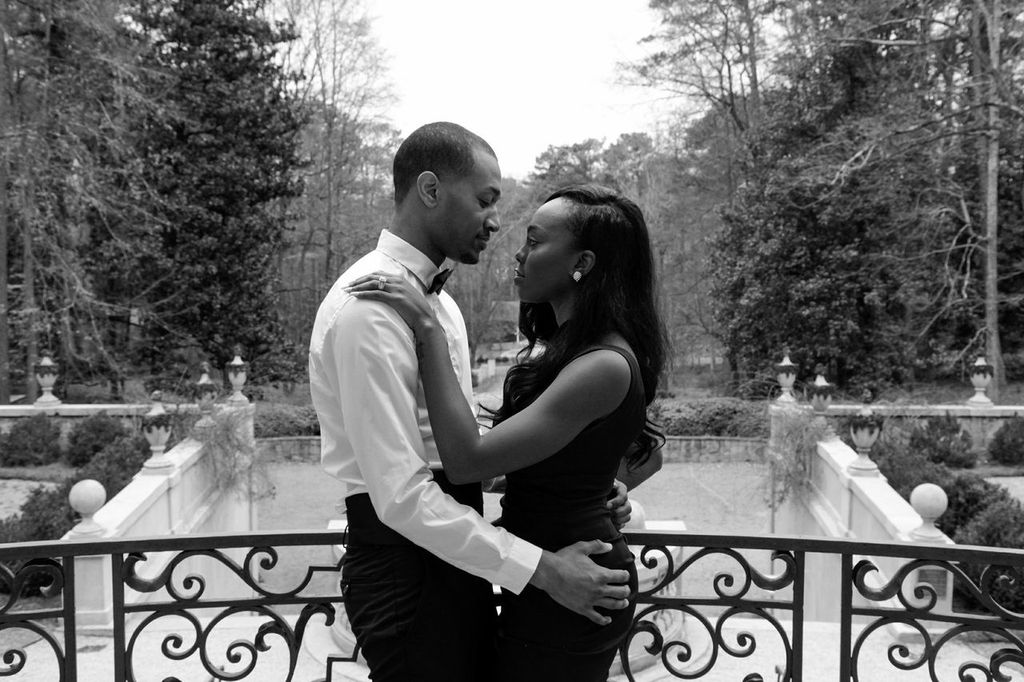 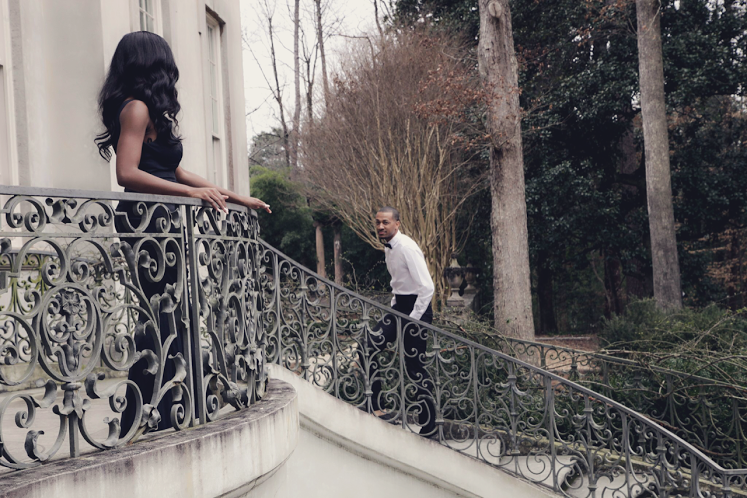 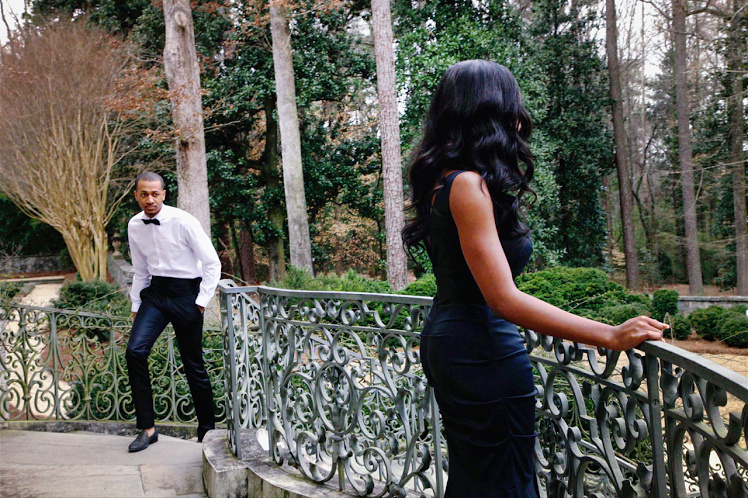 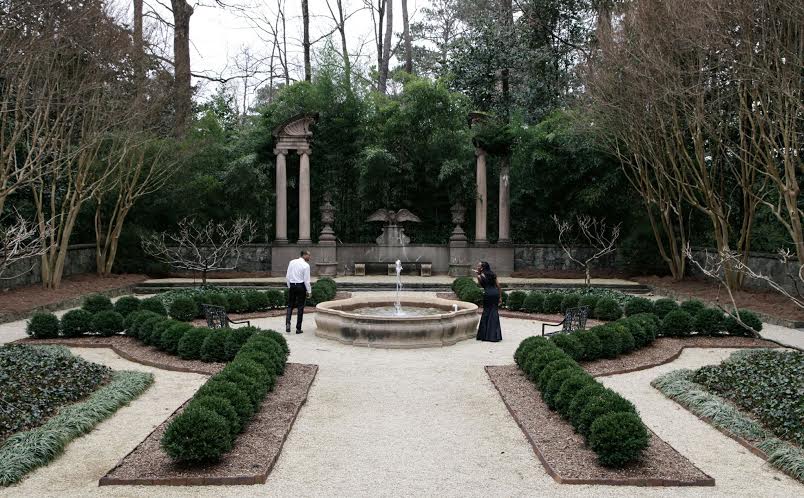 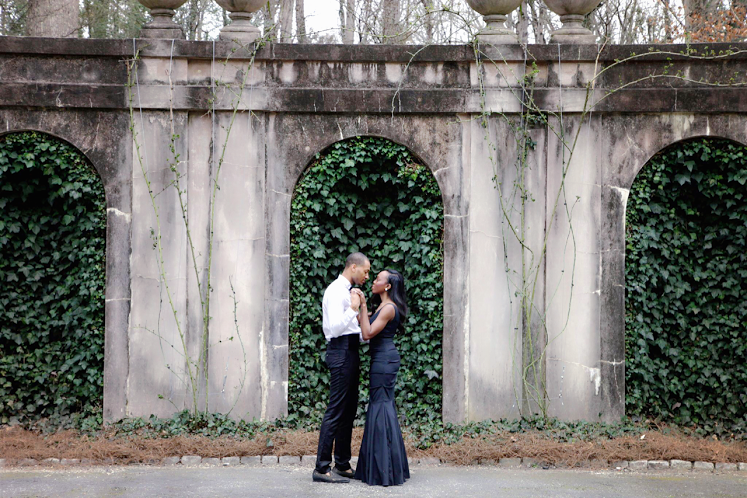 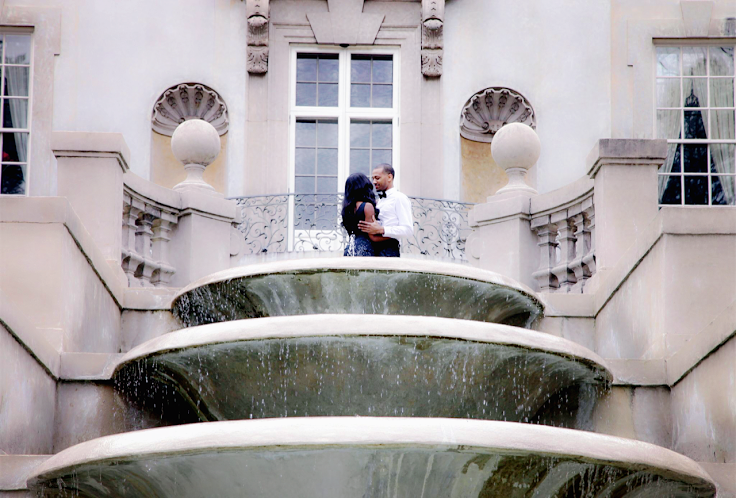 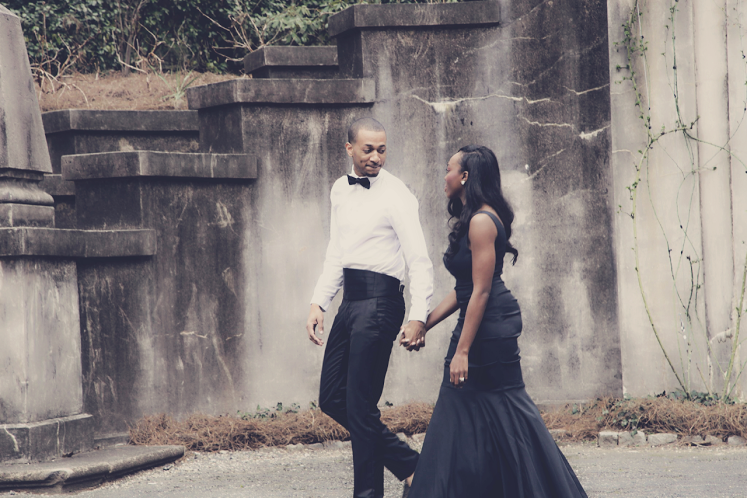 Joys and pitfalls In Planning

We are strong in our faith.  I know this day will come around only once in my lifetime and I’ve always dreamed of getting married and being a married young adult.   I’ve been a fashion girl the majority of my life but I’ve put much thought and details into my future wedding like most brides until I actually became in engaged.   It’s exciting and overwhelming at the same time.   Having our families merge together for the first time will be interesting.  We both come from dysfunctional families and we want to break that generational curse.   My fiancé likes all my ideas and I try to incorporate things that he likes as well.

I’ve found that getting him to add names on the guest list is difficult because he feels that his family doesn’t support him.  However, we’ve came to realize that there will be ups and downs during the process, especially when one family is more involved than the other.  He is coming around to understand the vision and I thank him for that.  We’ve already booked our venue and we’ve decided to document some of the process and the journey as a couple.  So we will be launching a YouTube channel soon and a blog attached to our wedding website. Our first episode will release sometime during the summer which will show some of our Pre – Marital sessions, my hunt for bridesmaid dresses, meetings with our coordinator, and more!

We’re actually eloping this year and Our official Wedding Ceremony will be September 29, 2017. We’re trying to save for our house being built and planning our wedding at the same time.  I’m very particular and I love details so I would tell any future bride to start planning their wedding as soon as possible.   Lock down your venue, research vendors and put deposits down for the most important aspects of your wedding so that you’re not crunched with financial pressure in the long run.   I’m a perfectionist and I want to make sure my dream wedding comes to reality and you should too!  My fiancé and I are paying for a majority of the costs associated with our wedding.   Also make sure you have someone who can help you coordinate and stay on track with your wedding plans.  After all  this is your wedding but don’t get so caught up in the wedding that you forget why you are planning this day in the first place.  Have fun and enjoy the wedding process.